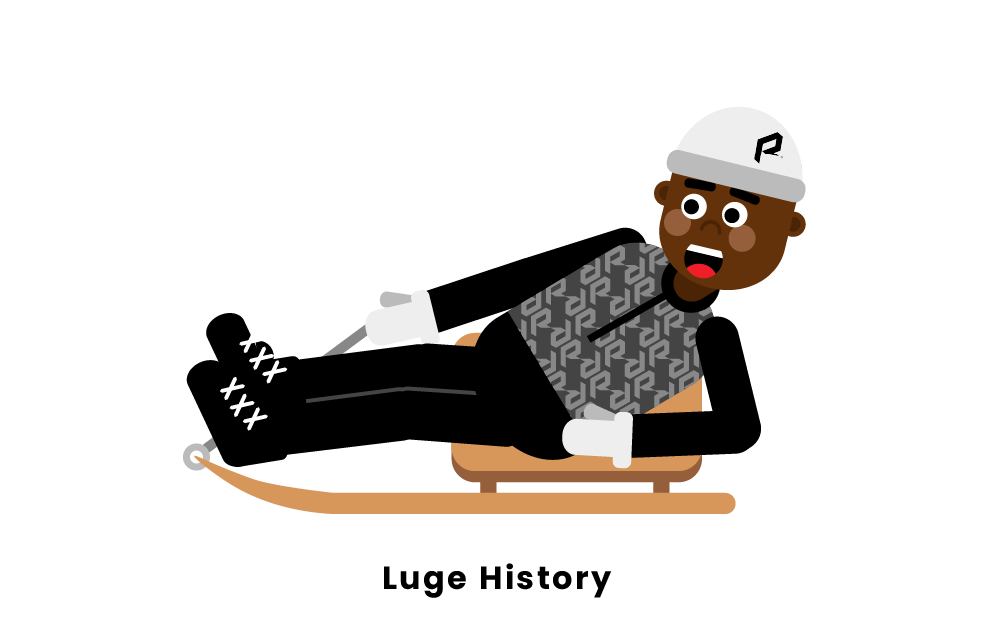 A winter sport with a long history, luge is among the fastest and most intense sports on ice. Like skeleton and bobsleigh, luge involves sliding down a narrow, curving track of ice at high speeds, with the using reflexes for turning. However, unlike the bobsleigh, which is a large vehicle with high sides, lugers slide down tracks on a single board and have little protection. This alone makes luging a very dangerous sport, but also exciting to watch.

Like bobsleigh, luge is a sport that was developed many hundreds of years ago, in the country of Switzerland. First emerging in the 16th Century, the word “luge” is derived from a French word meaning “sledge,” which describes the small sled lugers use in their sport. Though its roots trace back to the 1500s, luge did not become a more widely practiced sport until over 300 years later.

In the mid-1800s, luge started to grow more popular as a sport, beginning as an activity for tourists. In Switzerland, hotel owners began to construct luge tracks on their properties in order to draw in customers who were seeking the thrills and adventures of the sport. One of the most influential of these was Caspar Badrutt (1848-1904), a hotel owner in St. Moritz, Switzerland, whose business practices helped to draw in clientele and led to the development of sports like luge and skeleton. Over time, the sport grew in popularity, and by the late 1800s, it had reached a new peak of interest, which led to the development of luge competitions. The first of these competitions was held in the Swiss town of Davos in the year 1883. The track for the race covered approximately four kilometers between Davos and the nearby village of Klosters.

After the first luge competition, the sport continued to grow until it was included along with other sledding sports in the founding of the International Sled Sport Federation in 1913. Later, in 1935, the ISSF merged into the Fédération Internationale de Bobsleigh et de Tobogganing (FIBT). Shortly after the founding of the ISSF, in 1914, the first European Luge Championships were held in Reichenfels, Austria, involving single and double-seater events. In 1955, luge had its first World Championship, held in Oslo, Norway. Two years later, in 1957, luge was officially split off from the FIBT and developed its own governing body, the Fédération Internationale de Luge de Course (FIL).

Luge was not adopted as an official Olympic sport until 1964, where it made its debut at the Winter Games in Innsbruck, Austria. At this first Olympic outing, a men’s event, a women’s event, and a mixed event were included in the program. This program has remained the same since 1964. Originally, luge was performed on its own Olympic track, but in the 1976 Winter Games, which were also held in Innsbruck, luge was merged onto the same track as the bobsleigh, where it has remained to this day.

Between 1964 and 1988, the Olympic luge program was almost always won by athletes from East Germany, a state which existed from 1949 to 1990, and ended with the fall of the Berlin Wall in 1989. In the period between 1964 and 1988, East German athletes won 15 of the 21 available gold medals in the luge. After the reunification of Germany, the country’s athletes continued to dominate at luge, among them Georg Hackl, one of the most famous lugers of all time, who accomplished the feat of winning gold in the sport at three consecutive Winter Olympics: 1992, 1994, and 1998.

What is the history of luge?

Luge emerged as a sport in Switzerland, with its modern form developing in the mid-1800s, after obscure origins in the 16th Century. Luge initially began as a sport designed to attract thrill-seeking tourists, with Swiss hotel owners building tracks for the use of their guests. After many years, however, Switzerland held the first-ever luge competition, which later snowballed into European and World Championships, the development of the sport’s own governing body, and its ultimate inclusion in the Winter Olympics beginning in 1964.

The invention of luge is commonly attributed to Caspar Badrutt, a Swiss hotel owner whose business practices in the late 1800s drew in massive crowds of tourists to his establishment. In order to stem the large crowds, Badrutt began to develop distractions for them, including high-speeds sled rides down icy streets. These activities, which became wildly popular, soon developed into sports like luge and bobsleigh.

Where did luge start?

Luge began in the countries of Northern Europe, beginning in the 16th Century in countries like Germany and Austria. However, the official development of the sport began in Switzerland. The first official luge competition was held in Switzerland in 1883, after which the sport experienced a slow but steady increase in popularity, which eventually led to its inclusion in the Olympics in 1964.

Pages Related to History of Luge