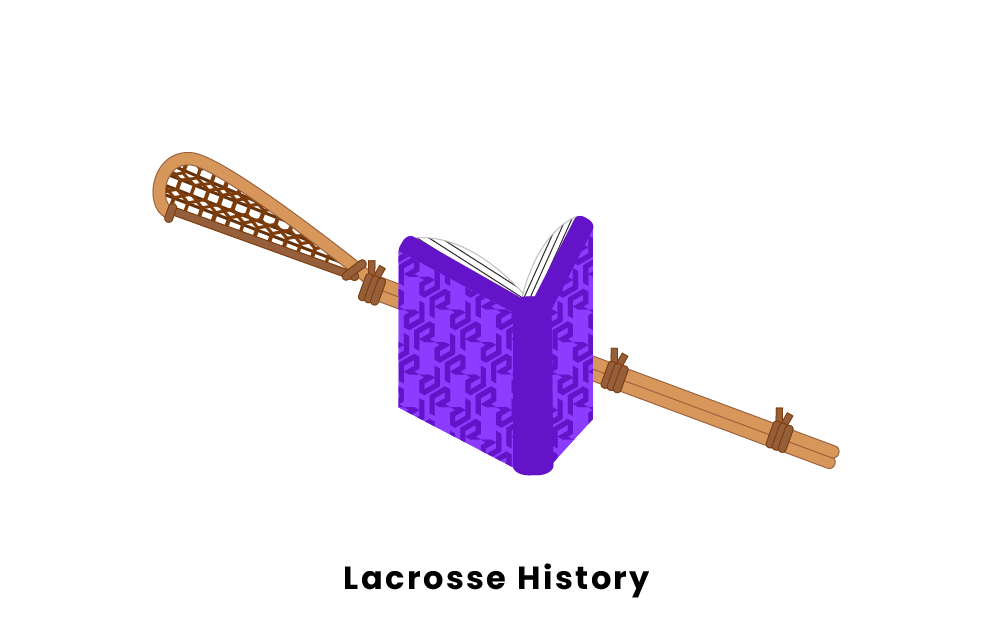 Lacrosse was one of the first sports created in North America, and it still remains popular today. Read below to learn more about the history and development of America’s oldest sport.

Originating in 1100 A.D., lacrosse was created by the Iroquois tribe, known as the Haudenosaunee, as an important cultural and societal activity. Lacrosse, which was called stickball at the time, was played for various reasons, such as religious connections, bet settlements, and war preparations. Games were major events involving 100 to 100,000 individuals in a large area spanning miles and were played over days until a winner was decided. In its earliest form, sticks with nets made of deer sinews were used to pass deerskin balls, and the objective was to retain control of the ball. While a competitive sport in nature, the Iroquois recognized lacrosse as the Creator’s gift, emphasizing its spiritual and religious origins. Lacrosse is still a major part of the Iroquois society, and they continue to demonstrate its importance today.

Following European settlement in North America, lacrosse evolved into a more structured sport. French missionaries were responsible for the name “lacrosse” and introduced the first official rules. Canada declared lacrosse its national sport in 1859, and Canadian Dr. William George Beers wrote one of the first rule books in 1876. Europe was then exposed to lacrosse when exhibition games were played throughout England and Scotland. The first men’s collegiate team was created by New York University in 1877, and the first women’s team in 1926 at the Bryn Mawr School in Baltimore. In 1904 and 1908, lacrosse was played in the Summer Olympics. Today, lacrosse is extremely popular at the collegiate level, and some professional leagues exist, such as the Premier Lacrosse League and the National Lacrosse League for men, while the women’s game has Athletes Unlimited.

The History of Women’s Lacrosse

Although originated in North America, a Scottish woman, Louisa Lumsden, was influential in bringing the game to Europe after seeing a lacrosse game on her travels to Canada in the 1800s. The first women’s lacrosse game was then held at St. Leonards School in Scotland on May 17, 1890. After playing for St. Leonards, Rosabelle Sinclaire organized the first women’s collegiate lacrosse program in 1926 at the Bryn Mawr School. Recognized for her strides in women’s lacrosse, Sinclaire became the first woman inducted into the US Lacrosse Hall of Fame. Women’s participation in lacrosse increased following Title IX, and the International Federation of Women’s Lacrosse Association was also created. In recent years, the U.S. women’s team won 8 of 10 World Cups, with the women’s game continuing to gain popularity.

Where did lacrosse originate?

Lacrosse was first played in present-day New York and Canada by the Haudenosaunee. Since the game was developed thousands of years ago, the exact location of its origin is unknown. Historians have also stated that the game was played in the St. Lawrence River Valley as well as the surrounding areas of the Great Lakes. From these areas, lacrosse grew into an international sport played by people across the world.

Who are the Haudenosaunee?

As those who created the game of lacrosse, the Haudenosaunee are one of six indigenous confederacies that still exist today in New York and Canada. Lacrosse has been a central part of their society for centuries and remains a very spiritual sport. The Haudenosaunee teams, known as the Iroquois Nationals, have struggled for years to receive representation on the international scale due to their classification as a sovereign nation. Despite these issues, the Iroquois Nationals will compete in the 2022 World Games after Ireland withdrew.

What are the basic rules of lacrosse?

The main objective of lacrosse, both men’s and women’s, is to pass and score the ball to gain more points than your opponent. However, besides the game’s main objective, men’s and women’s lacrosse have very different rules. In men’s lacrosse, extensive equipment is required, such as helmets and pads, because the game has become more physical and competitive. Conversely, women’s lacrosse has maintained relatively the same rules, focusing on passing the ball between teammates on offense and defense, but with minimal physical content between players.

Pages Related to Who Created Lacrosse?