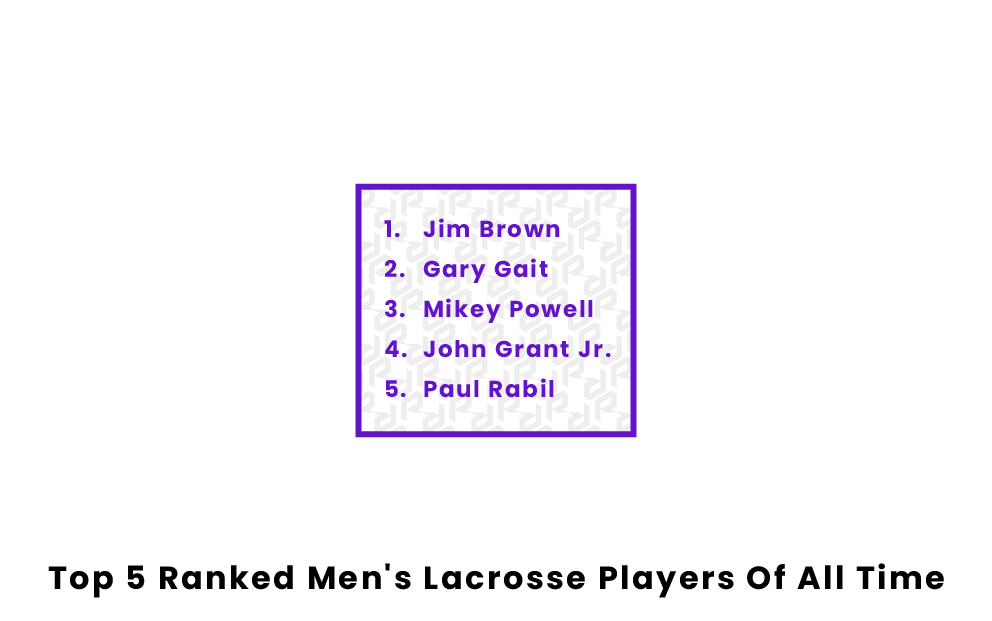 Who are the top 5 men's lacrosse players of all time?

The top 5 greatest lacrosse players of all time include:

At times, Jim Brown's excellence in lacrosse is overshadowed by his impressive accomplishments in football. Brown was one of the most exceptional athletes of his time and his greatness is recognized across multiple sports. Despite the fact that Brown went on to play professional football in the National Football League, many believe he was even better at lacrosse than football. In fact, he once said, "I'd rather play lacrosse six days a week and football on the seventh."

Along with his numerous accolades in lacrosse, Brown was also a star football, basketball, and track star during his time at Syracuse University before his graduation in 1957. Brown was so dominant on the lacrosse field, that he takes the top spot on this list solely based on his success in collegiate lacrosse. In his junior season, Brown was a Second-Team All-American in lacrosse, followed by a First-Team selection his senior year. As a senior, Brown scored 43 goals in only 10 games for Syracuse, making him the second highest scorer nationally. Recently, the newly founded Premier Lacrosse League gave Brown the honor of naming their MVP trophy after him. He was inducted into the National Lacrosse Hall of Fame in 1983 and many credit his prowess on the lacrosse field to helping the sport's popularity grow significantly in the 1950's. Brown's impact on the game of lacrosse is undeniable and many credit him with being the sport's most influential figure to this day.

Gary Gait was born in Victoria, Canada and would go on to attend college at Syracuse University, becoming one of the most iconic names in lacrosse worldwide. He helped to revolutionize how many people saw the game of lacrosse through his use of unique and flashy moves such as behind the back passes or his most notable move, "Air Gait" (an acrobatic attempt to score that involved jumping from behind the crease and landing on the other side after shooting the ball). "Air Gait" became a common phrase in the sport of lacrosse, despite the fact it was later outlawed in the NCAA.

During his collegiate career, Gait was a seemingly unstoppable force. He was a 4x All American, earning an honorable mention his freshmen year, followed by first-team honors each year after. Gait also helped lead Syracuse to three National Championships during his time at the school, a tough feat that many other lacrosse legends have been unable to accomplish since. Gait earned the NCAA's Player of the Year in both 1988 and 1990, along with the Most Outstanding Player in the 1990 NCAA tournament. He graduated as Syracuse University's leading scorer and went on to have an equally impressive professional career.

Gait set numerous scoring records in the National Lacrosse League. He also won the league's MVP award a record 6 times, five of those times being consecutive! In Major League Lacrosse, Gait spent significantly less time on the playing field. However, this didn't stop him from winning numerous awards including MLL MVP, MLL All-Star game MVP, and MLL Championship game MVP. Following his extremely impressive collegiate and professional careers, Gait was quickly welcomed into the U.S., Canadian, and National Lacrosse League Hall of Fames. He would also continue his legacy through coaching and the development of the Gait lacrosse brand (along with his brother Paul), which manufactures various equipment for the sport. With one of the most iconic names in lacrosse to this day and a seemingly never ending list of awards and records, Gait has easily earned the #2 stop on this list.

Mikey Powell is arguably the greatest attackman to ever play collegiate lacrosse. His impact from the attack position was undeniable as he led his alma mater, Syracuse University, to two NCAA National Championships during his time there from 2001-2004. He also holds the school's record for most career points. Mikey Powell had a hard legacy to live up to, considering his older brothers Casey and Ryan graced the field for Syracuse in the years before him. Despite his brothers' many successes, most consider Mikey to be the best of the three Powells. Mikey Powell received NCAA First-Team All-American honors in each of his four seasons. He was also recognized as the NCAA's best attackman by winning the Jack Turnbull Award in every season as well. Powell broke numerous records during his collegiate career (many held by his own brothers) and sat at 6th in NCAA career points and 13th in career assists upon his graduation. Additionally, Powell was a two-time NCAA Tewaaraton Award winner during his collegiate career, which is essentially equivalent to the Heisman trophy of lacrosse.

As a huge surprise to most of the lacrosse community, Powell elected not to immediately play professional lacrosse after his graduation, and instead pursued a music career. In 2005, Powell joined Major League Lacrosse by playing alongside fellow Syracuse lacrosse legend Gary Gait on the Baltimore Bayhawks. He also won the MLL All-star game MVP award during that season. While his professional career was not very lengthy, Powell contributed significantly to the United State's Lacrosse World Championship run in 2006, and was selected to the All-World team consequently.

John Grant Jr. did not have the typical collegiate career of most athletes on this list. Collegiate lacrosse is perhaps even more popular than professional lacrosse in the eyes of many lacrosse fans. Therefore, Grant's place on this list despite his unusual path in collegiate lacrosse is not to be taken lightly. Grant Jr. spent time in the OLA (Ontario Lacrosse Association) Junior A division prior to his time in college. In fact, he was drafted into the NLL in 1995 but elected to attend school at SUNY Morrisville instead. Grant Jr. spent 2 years at SUNY Morrisville, then transferred to the University of Delaware where he began to receive the recognition he deserved. At the University of Delaware, Grant Jr. was a two-time All-American in his final two seasons. In his senior year, he earned the Jack Turnbull Award and USILA National Collegiate Player of the Year in 1999. John Grant Jr. set nearly every lacrosse record at both SUNY Morrisville and the University of Delaware. Additionally, his 110 point senior season remains 10th in all time NCAA single season points for the sport.

Grant Jr.'s list of professional awards seems to be endless as he is one of the most decorated players at the professional level of the sport. His excellence has been recognized by every league he played in, including the NLL, MLL, MSL, OLA, and in international play as well. When Grant Jr. returned to the NLL in 1999, he was the #1 overall pick and would go on to win the NLL Rookie of the Year Award in that same season. In both 2007 and 2008, he won MLL Offensive Player of the Year and League MVP. Grant Jr. briefly retired in 2017, but soon returned to the MLL in 2019 at the age of 44, making him the oldest player to ever play in the league. In his first game back from retirement, Grant Jr. surpassed Paul Rabil as Major League Lacrosse's all time leading scorer.

Just like those before him on this list, Paul Rabil helped popularize the game of lacrosse and led it though yet another evolutionary phase. Similar to names like Jim Brown or Gary Gait, Paul Rabil significantly contributed to the growth and development of the sport as a whole. To many younger players, Rabil's name is synonymous with success in the lacrosse world. Paul Rabil played his collegiate career at Johns Hopkins University where he won two National Championships and received All-American honors three times. Following his time at Johns Hopkins, the professional lacrosse environment is where Rabil became a household name for many lacrosse fans. Rabil was the #1 overall pick in the 2008 MLL draft and was also selected to the league's all-star game in his first season. In 2009 and 2011, Rabil won both the MLL MVP and Offensive Player of the year. He continued to shine throughout his career in the MLL and NLL, earning almost too many awards to name, including multiple All-Pro selections.

Rabil has secured various sponsorship deals throughout his career. These include deals with Redbull, Warrior Sports (New Balance), Polk Audio, and numerous other companies. At one point, Rabil held the world record for the fastest lacrosse shot at 111 MPH. He went on to co-found the Premier Lacrosse League (PLL) in 2019 along with the help of his brother. Rabil's belief behind the PLL was to provide a competitive and entertaining professional lacrosse league that could actually support players as their full-time job. This is another huge stride that Rabil has made towards transforming the game of lacrosse. Whether it be his contribution on the field or off the field, Paul Rabil is always mentioned alongside some of lacrosse's greatest players.