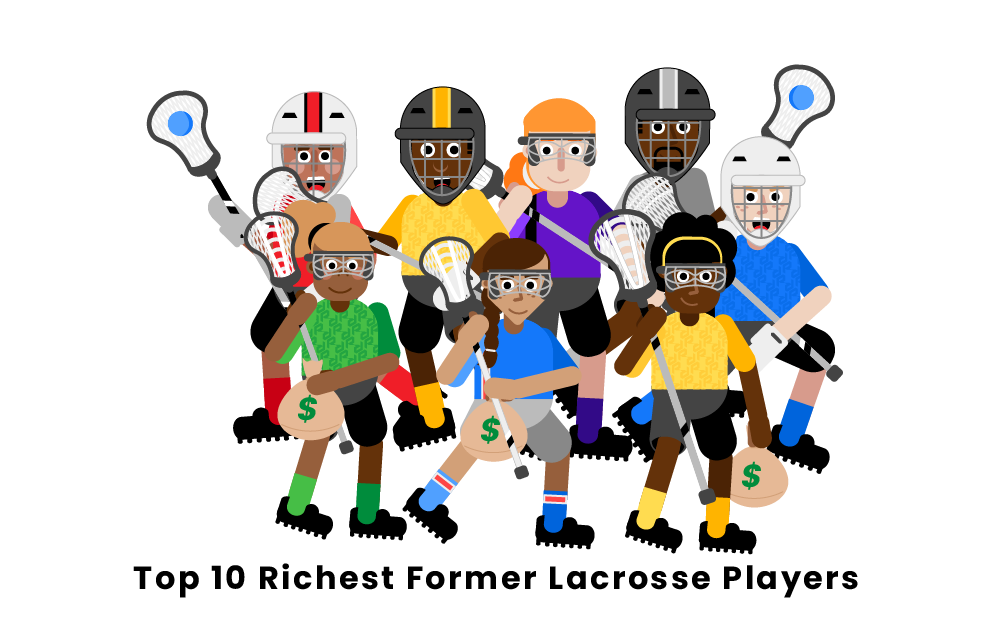 Lacrosse is a major up and coming sport in the US, with countless college students earning scholarships to compete in NCAA competition. With so many college educated athletes, lacrosse has some astonishing alumni that have gone on to have extremely successful careers. Read on to learn more about the ten richest former lacrosse players, and how exactly they earned their position on this list.

Who are the richest former lacrosse players?

The richest former lacrosse player is Chase Coleman III, holding a net worth of $10.3 billion. Chase has earned the second spot on this list through his career as a hedge fund manager and investor. Although he tends to be very private when it comes to media coverage, it's common knowledge that he made most of this money after he founded Tiger Global Management. Chase’s lacrosse career ended at Williams College, where he played on the men’s team as a co-captain back in 1997.

The second richest former lacrosse player is a man known as Joe Tsai, with a net worth of roughly $8.8 billion. Joe Tsai’s lacrosse career began at the young age of thirteen, and it peaked during his four years of college as a student-athlete at Yale University in New Haven, Connecticut. Joe played lacrosse for all four years during his college career before he later made his fortune.

Joe is one of the co-founders of the very famous company called the Alibaba Group, known as the “Amazon of China.”  Through his astronomical financial success, he was also able to purchase the Brooklyn Nets basketball team and get involved with numerous other business ventures.

With a net worth of close to $4.7 billion, Meg Whitman firmly earns her place on this list of the richest current and former lacrosse players. Meg was one of the top female lacrosse players on the team at Princeton University back in 1977. After graduating, she moved right into the corporate world, where she has dominated and continues to be a highly influential figure. Meg is most famously known for her turnaround of the company eBay, in which she increased its sales from under six million to over eight billion dollars when she was the CEO back in the early 2000s. She has since moved on and become the CEO of Quibi.

Coming in fourth place of the richest former lacrosse players is Jim Brown, whose athletic success led him to earn a net worth close to $50 million. Although he is better known for his football skills, Jim played lacrosse throughout his college career at Syracuse University. After graduating, Jim went on to make a career for himself playing football in the National Football League for the Cleveland Browns between 1957 and 1965. He made most of his money playing football, and is considered one of the best running backs of all time. Brown went on to begin his career as an actor. Brown has been known to actually prefer playing the sport of lacrosse.

Fifth on the list of the richest former lacrosse players of all time is Bill Belichick, who holds a net worth in the ballpark of $40 million. Although he is most famously known as being one of the best professional football coaches of all time, Bill played lacrosse in college when he attended Wesleyan College. Bill has made most of his fortune from his career as head coach of the New England Patriots. Bill has led the team to become one of the greatest sports dynasties of all time, in large part because of his work with Tom Brady, one of the greatest quarterbacks of all time.

Sixth on the list of the wealthiest former lacrosse players of all time is Erika Nardini, with a net worth of around $12 million as of 2022. She is the CEO of Barstool Sports, a sports media brand that has grown exponentially in recent years through social media outlets including Instagram and Twitter. Erika played lacrosse at Colby College, located in Maine, but did not begin playing until her sophomore year. Erika is very close friends with lacrosse icon Paul Rabil and remains a close supporter of the sport and its top athletes.

Seventh on the list of the richest former lacrosse players is Chris Hogan, with a net worth of about $6 million. Although he is not known for his lacrosse skills, Chris played lacrosse while he attended Penn State. He later decided to switch sports and play football instead, so he transferred to Monmouth during his later college years. Chris was a successful wide receiver in the National Football League and is a two-time Super Bowl champion. He played for some of the most recognizable teams in the NFL, including the New England Patriots, the Buffalo Bills, and the Miami Dolphins.

Coming in eighth on the list of the richest former lacrosse players is Paul Rabi, with a net worth of around $1-5 million. Paul is considered one of the best lacrosse players of all time and is very well-known in the sport’s community. In addition to playing lacrosse professionally, after he graduated from Johns Hopkin University back in 2008, Paul has also grown his net worth through numerous brand endorsement deals and his recent co-founding of the Premier Lacrosse League alongside his brother Mike Rabil.

Ninth on the list of the wealthiest former lacrosse players is famous lacrosse goalie Alex Hewit, who earned his spot on this list with an estimated net worth between $1-3 million. Alex has made most of his fortune in the financial industry, and he currently works for UBS. Alex spent his lacrosse career playing goalie at Princeton University, and he had an extremely successful career as a student-athlete.

Gary GAit earns tenth place on the list with an estimated net worth of between $1-3 million. He is a Canadian lacrosse player born in Victoria, Canada, and he played at Syracuse University for the entirety of his college lacrosse career. Gary played in the National Lacrosse League starting in 1990, when he was drafted to the Detroit Turbos. Gait went on to play on some of the greatest teams in the sport, including the Toronto Nationals and the Long Island Lizards. He was the Interim Commissioner of the United Women’s Lacrosse League in 2017 and is currently the coach of Syracuse University’s Men’s Lacrosse team after a long stint with the Women’s team. To this day, Gary continues to support the sport of lacrosse.

While he’s not included in our top ten list, David Morrow is yet another noteworthy lacrosse player worth mentioning for his financial success. Morrow was a college lacrosse player at Princeton, and quite a good one at that. Morrow racked up various accolades on the lacrosse field, including a spot on the 1998 World Lacrosse Championship All-World Team and gold medal finishes in both the 1994 and 1998 World Lacrosse Championship. Morrow’s wealth was accrued largely through his co-development of Warrior Sports, a wildly successful lacrosse brand that produces products like sticks, helmets, and pads. The company is said to rack up over $60 million in revenue annually.

Another member of our honorable mentions, Tom Schreiber made his fortune playing professional lacrosse and has a net worth of $1-5 million. Tom is a member of Archers LC, a team within the PLL. He’s been a force to be reckoned with in the PLL since joining in 2018, previously having played in the MLL and NLL after graduating from Princeton University in 2014. Over the course of his career, Schreiber has earned two MLL MVP awards, four MLL All Star Game appearances, an NLL Rookie of the Year award in 2017, and two PLL Gait Brothers Midfielder of the Year awards. While that pales in comparison to other members on our top ten list, this is a tremendous total earning for a professional lacrosse player.

Myles Jones is another professional lacrosse player who graces our list on account of the money he’s made through his skill on the lacrosse field, holding a net worth of $1-5 million. Jones currently plays for Redwood LC in the PLL, and played college lacrosse at Duke University. During his playing career Jones has earned a PLL All Star distinction and two MLL All Star Selections. Jones is believed to have earned the majority of his wealth through his player salary and endorsements.

On average, how much do professional lacrosse players make annually?

Who has made the most money playing lacrosse professionally?

Paul Rabil is the highest-paid professional lacrosse player in the world to date. In 2013, he was the first professional lacrosse player to raise his net worth to one million dollars through the lacrosse world. In addition to his annual salary through playing in the Premier Lacrosse League, he has secured a ton of endorsement deals with brands like Red Bull. Paul Rabil founded the PLL in 2019, and the league’s growing popularity has added significantly to his value.

The main reason that professional lacrosse players make significantly less money each year than other professional athletes is because lacrosse as a profession is still a niche market. There is a much smaller audience of people willing to pay to see lacrosse games compared to sports like football or basketball. There are also far fewer large brands interested in endorsing these players and the teams they play for. Without a large audience to watch, the sport can’t sign any significant television deals, and therefore, the market remains small.

Can professional lacrosse players make money in ways other than just playing lacrosse?

Yes, professional lacrosse players can make money in many other ways than just playing lacrosse. In fact, they are typically forced to because the average annual salaries for these professional players are so low. In addition to annual salaries, these players can also bring in some more money through brand endorsement deals. The majority look to other methods, including coaching jobs and even finance jobs, for extra income.