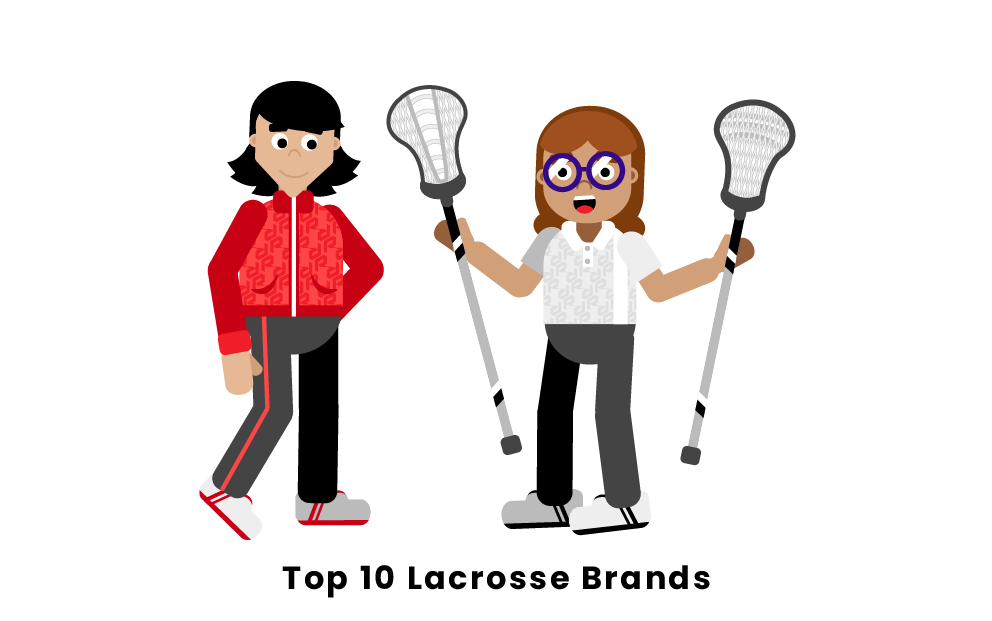 Lacrosse is a fun and competitive sport that requires specific equipment and safety gear to be played. The list below compiles trusted brands among players. Whether you are an amateur or a professional, these tried and true brands are great options when choosing your equipment.

What are the most popular lacrosse brands?

The current top 10 lacrosse brands are:

STX is the industry’s leader in lacrosse products. Whether it be gloves, pads, heads, shafts, apparel, or anything else involving lacrosse, STX has it. The name STX is a play on the word “sticks”, in reference to lacrosse sticks. STX is one of the largest manufacturers of men’s, women’s, and youth lacrosse equipment, and also produces ice and field hockey equipment. The company has been around since 1970 and is headquartered in Baltimore, Maryland. STX has many sponsors throughout the lacrosse industry, nearly doubling the number of sponsorships of other brands on this list. It sponsors numerous professional athletes, university teams, and the Premier Lacrosse League. These include some of the biggest names in college lacrosse, such as Cornell, Syracuse, Duke, and more. Their presence in the PLL is heavily felt as they sponsor many high-caliber players such as Kyle Harrison. Being so involved in nearly every aspect of lacrosse, from youth to collegiate to professional, gives STX the largest influence in the lacrosse industry.

Maverik Lacrosse is another big player in the lacrosse industry. They provide equipment, accessories, apparel, and anything else related to lacrosse. Maverik offers a variety of options for men, women, and children lacrosse players. Currently, the company's focus is solely on the lacrosse market, so they do not manufacture gear for any other sports. Maverik Lacrosse was founded in 2005 and their headquarters are located in New York City. While Maverik does not sponsor any college or professional teams, their presence is clearly shown through the players they sponsor. Maverik sponsors both male and female professional lacrosse players, including Joe Walters, Riley Donahue, and Nick Mariano.

Cascade Lacrosse is a notable brand in the lacrosse world. Founded in 1986, Cascade has been a consistent provider of quality lacrosse helmets for years. The company is based out of Liverpool, New York, and manufactures equipment for men’s, women’s, and youth lacrosse. Cascade focuses mainly on headwear, and has become the largest producer of lacrosse headwear in the world. They are most well known for their men’s lacrosse helmets, which revolutionized the game upon their release. Cascade helmets such as the CPX-R and S models are stylish, lightweight, comfortable, and allow for various adjustments to fit any athlete. They also provide high quality goggles and headgear options for women’s lacrosse players. Cascade does not sponsor any individual athletes; however, they recently partnered with the PLL to become the league’s official helmet sponsor.

Warrior Sports was founded in 1992 and is currently based in Warren, Michigan. Warrior notably manufactures equipment for ice hockey along with lacrosse, holding a high reputation in both sports. The company attempted to enter the soccer industry in 2012, but discontinued its soccer equipment line shortly after. Warrior is owned by New Balance, a leader in producing equipment for sports. Warrior has offered a wide range of lacrosse products over the years, including heads, shafts, pads, helmets, cleats, and apparel. Warrior currently sponsors Major League Lacrosse and had previously sponsored Paul Rabil, one of the sport’s most well-known athletes, prior to his entry in the Premier Lacrosse League.

Nike is well known worldwide and produces equipment for nearly every sport imaginable, lacrosse included. They are a multi-billion dollar company with an international reach, headquartered in Beaverton, Oregon. With such a large presence and reputation in the sports industry, it's no surprise that their lacrosse gear is top-notch. Nike provides high quality cleats, accessories, shafts, heads, and pads for men’s, women’s, and youth lacrosse. As a familiar brand, many beginners to lacrosse will start with Nike products. While Nike does not directly sponsor any lacrosse programs or players, the company sponsors several influential universities such as Ohio State, Syracuse, LSU, Duke, and more. While lacrosse may not be Nike’s main focus, they certainly do a great job of manufacturing high quality lacrosse equipment.

Brine holds a notable name in the world of lacrosse and has a deep history in the sport. Brine was founded in 1922, with its headquarters located in Milford, Massachusetts. As one of the oldest companies to manufacture lacrosse equipment, they have a good reputation within the sport. Their logo resembling a king has become iconic within the Lacrosse community. Many would be surprised to know that Brine is actually owned by Warrior (New Balance), which is a competing lacrosse brand. Additionally, former Brine employee Bill Brine left the company in 1986 to form Cascade, another lacrosse equipment powerhouse. Brine currently provides heads, shafts, and pads, along with other lacrosse accessories. Brine also has a reputation of producing some of the best goalie equipment in the sport.

East Coast Dyes, commonly referred to as ECD, is another top lacrosse brand in the United States. ECD is relatively new to the lacrosse industry, founded in 2011 in Towson, Maryland. The company quickly gained popularity from its primary product, Hero mesh. Their unique mesh design and wide range of color options took the lacrosse industry by storm and they soon became one of the most popular meshes in the sport. Since their rise in popularity, ECD has increased their product offerings to include much more than mesh. Currently, they sell heads, shafts, mesh, and other accessories for men’s and women’s lacrosse. East Coast Dyes sponsors both male and female athletes in professional lacrosse. Their sponsored athletes include Lauren Lea, Myles Jones, and Mike Simon. As of now, ECD does not sponsor any universities or professional teams. However, their mesh is still widely used by many athletes in high school, collegiate, and professional lacrosse leagues.

Epoch Lacrosse is a top lacrosse brand that has gained a reputation as being an innovator in the lacrosse industry. Epoch prides itself on using high quality materials to produce unique designs. Additionally, they offer many options for customizing equipment. Epoch is another relatively new brand, founded in Minnesota in 2011. Epoch offers a variety of different heads, shafts, mesh, and protective equipment for men’s and women’s lacrosse. Their main focus lies in youth lacrosse, and both owners coach youth teams in Minnesota. Epoch’s current sponsorships include a partnership with the Premier Lacrosse League, along with being the official equipment sponsor of the National Lacrosse League. With their reputation for creativity and innovation in the lacrosse industry, it is certain you will see more of Epoch in the future.

Gait Lacrosse gets its name from lacrosse legends Gary and Paul Gait. Its name holds a large significance to many lacrosse fans and has a very large following. In 2015, Gait’s parent company Jarden discontinued the brand. However, Gait recently relaunched its products and returned to the lacrosse market under Paul Gait’s guidance. Currently, Gait focuses on supplying lacrosse heads, shafts, and gloves. In the past, the company offered more lacrosse equipment including pads, and cleats. Gait does not currently sponsor any teams, schools, or athletes; however, this could change in the near future. Even though Gait had been missing from the lacrosse industry for nearly four years, it remains one of the most recognizable and popular brands in the game, earning it the final spot on this list.