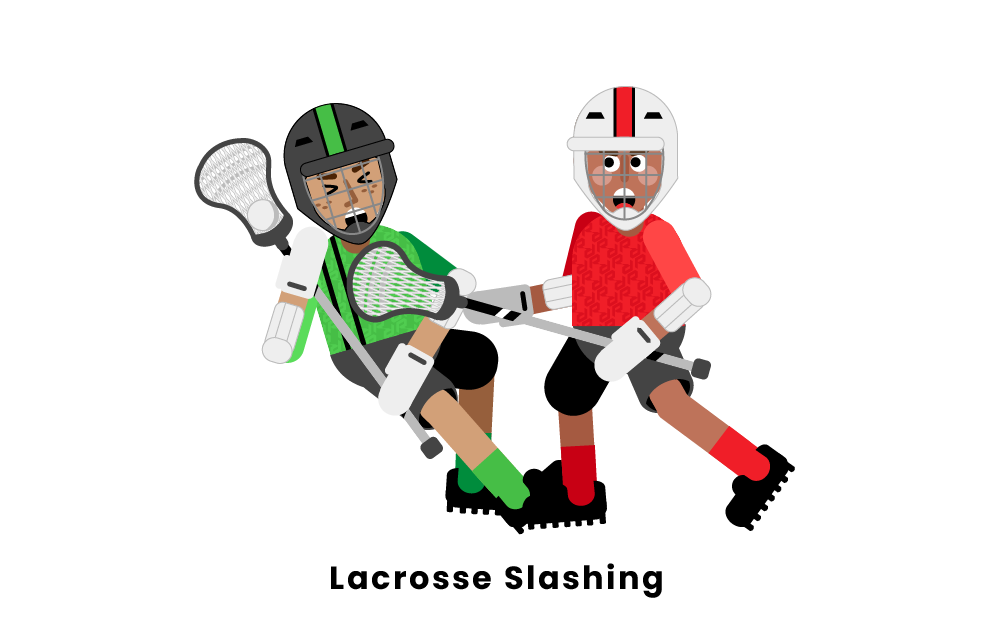 A lacrosse slashing penalty occurs when a player uses their stick to make a reckless or vicious swing at the opponent. This penalty is classified as a personal foul, which results in an unreleasable penalty; the length of the penalty is determined by the referee's discretion. While lacrosse is a physical sport, player safety is still of utmost importance, so this penalty is in place to ensure player's checks are controlled.

A lacrosse slashing penalty occurs when a player recklessly or viciously swings their stick at an opponent's body, head, or legs. While rarely called, someone does not always have to make contact in order for a slashing penalty to be called. Youth leagues are generally the only leagues that call slashing without contact.

When calling a slashing penalty, the referee must decide whether the slash was vicious, reckless, or both. A vicious swing is a swing that could injure an opponent if they weren't wearing any equipment. For example, a player swings at an opponent's head with both hands.

A reckless swing is simply defined as a swing in which a player demonstrates a lack of control. For example, a player is chasing an opponent and wildly swings their stick against an opponent with seemingly no aim. These acts can also be considered violent. However, it's more reckless since the player simply couldn't control their stick.

Slashing penalties can be called anytime during the course of play and can result in a one, two, or three-minute penalty, depending on the severity. Slashing to the head, neck, or legs is generally penalized more strictly. In extreme cases, ejection can even be warranted. It's also important to note that a shooting follow-through isn't considered a slash even if it makes contact with the opponent since the player is considered to be in the act of shooting.

A slashing penalty is usually a one-minute penalty in all levels of lacrosse. However, the penalty can be two minutes, three minutes, or even warrant an ejection if the slashing is considered to be severe.

When a player commits a slashing penalty, and isn't ejected the player is required to kneel in the penalty box for the duration of the penalty time determined by the official. During the penalty, the other team will play man-up. 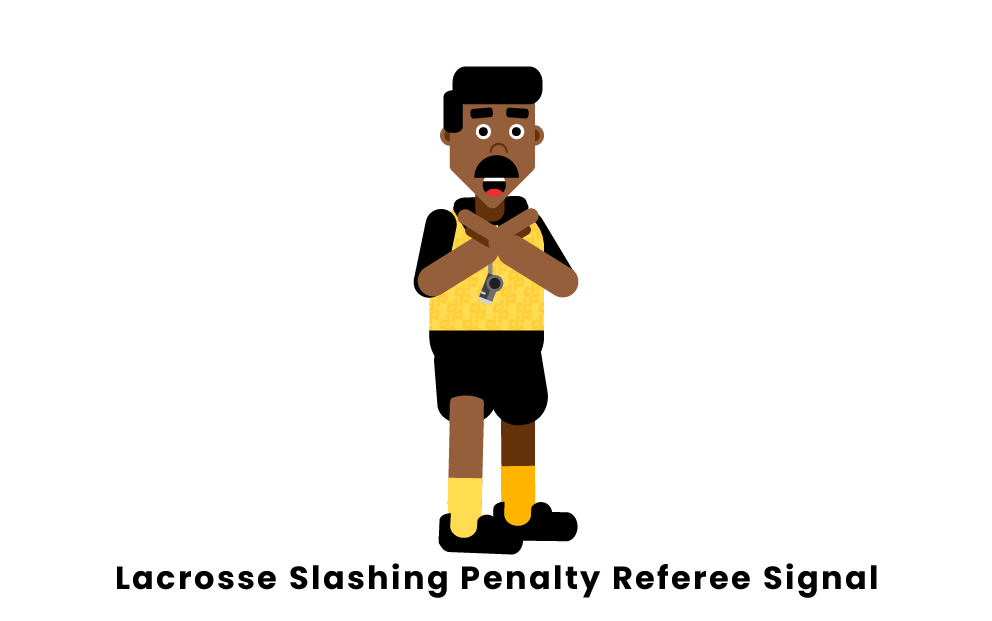 When the referee calls a slashing penalty, they must use their judgment to determine the length of penalty time to be served. This is based on the severity of the foul. As a personal foul, the minimum penalty for slashing is a one-minute non-releasable penalty, and this is usually what's called by the official. The referee then signals to the scoring table how long the penalty is, places their left hand over their right hand, and crosses their arms to signal slashing.

What is slashing in lacrosse?

In lacrosse, slashing is a penalty that occurs when a player swings their stick at an opponent in a reckless or uncontrolled manner, especially if they make contact with a player's head, neck, or legs during a check. The only areas that are allowed to be contacted are the opponent's gloves and stick. A player does not need to make contact with the opponent for it to be a slashing penalty; however, it's rarely called unless there's contact.

What are the consequences for being called for slashing in lacrosse?

Slashing penalties are at minimum a one-minute unreleasable penalty and are usually called as such. However, if a referee deems that the slash was on-purpose or was severe enough, the penalty time can be up to three minutes. Sometimes, an ejection can be warranted if the slash is deemed to be excessively violent and intentional.

Are you allowed to hit other players with your stick in lacrosse?

Yes, you are allowed to hit other players with your stick so long as it's a legal check to the opponent's stick or gloves. This is because defenders are still able to create turnovers without risking injury to the opponent. Slashing is only called if the swing is reckless, misplaced, or can cause an injury.