Lacrosse is a fast-paced team sport that is played outdoors or indoors. The game of lacrosse originated in North America and was first invented and practiced by American Indians. Many Native American tribes played lacrosse across the eastern seaboard from Canada and into the southeastern United States. The word lacrosse comes from the French word to describe the lacrosse stick or shaft attached to a pocket with netting (the crosse) used to pass and catch the ball. Primary research suggests that when it was originally practiced by American Indians, lacrosse was both a recreational activity and a proxy for war and combat on the battlefield.

The flow of play in lacrosse has elements that are similar to basketball, soccer and ice hockey. Lacrosse is a sport that has grown rapidly in popularity across the United States over the past fifteen years, and there are strong lacrosse communities in Canada, England, Australia and other countries around the world. Lacrosse is not an Olympic sport, but there are two major professional men’s leagues that compete in the United States and Canada, and the intercollegiate championships for men’s and women’s lacrosse are popular, televised events. The International Federation of Lacrosse hosts a world championship event for its national association members. Major League Lacrosse is the professional league for men’s field lacrosse, and National League Lacrosse is the professional league for men’s indoor lacrosse.

The lacrosse field is where the game of lacrosse is played. In outdoor lacrosse, the optimal field size is 110 yards long by 60 yards wide. There are three main areas on the lacrosse field: the offensive zone, the midfield zone and the defensive zone. The side of the field with a goaltender in the goal area is considered the defensive zone from the perspective of that team. Teams switch the direction of their offense at halftime. The playing surface can be either natural grass or artificial turf.

The objective of play is to score a goal against the opposing team. A goal is scored when the entirety of the ball travels past the goal line under the crossbar and in between the goalposts. The team with the highest number of goals at the end of regulation time or overtime is declared the winner.

To score a goal, the offense will pass the ball from one teammate to another or an individual player will run upfield with the ball in the pocket of his or her stick, a technique known as cradling. The defense, or team without possession of the ball, will try to prevent the offense from scoring a goal. Possession of the ball will shift back and forth between opposite teams throughout the game.

Players move the ball around the field by passing and catching or cradling. Cradling is the action of rotating the top hand back and forth to create centrifugal force, allowing the ball to remain in the pocket even when the player in possession is sprinting at a fast pace.

In a settled offense situation, the attackmen pass the ball, make cuts, dodge against defenders and set up feeds or assists. This ball movement is critical to challenge the defense and create a strong scoring opportunity. 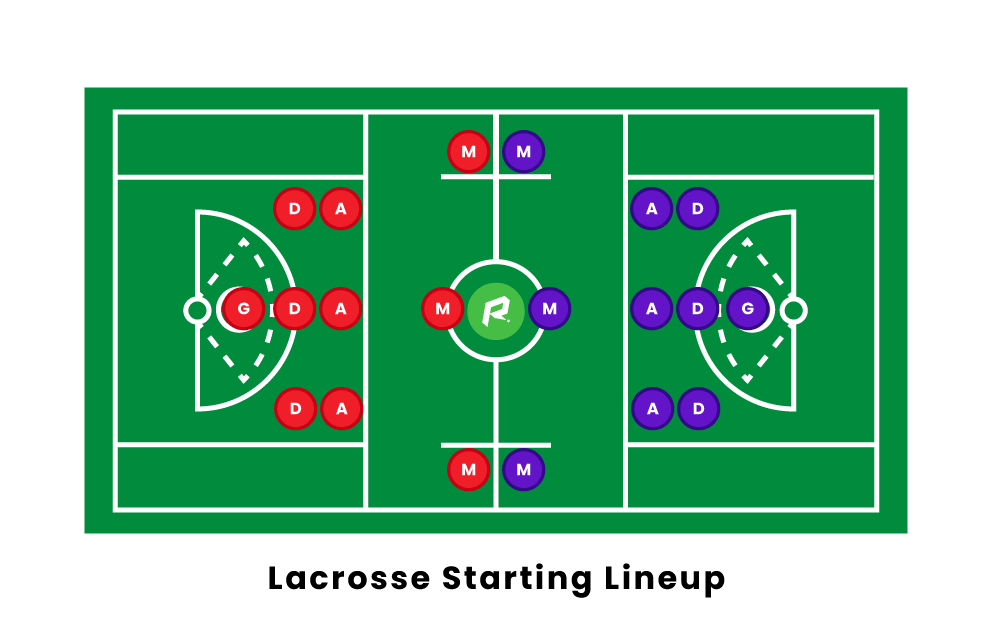 In men’s field lacrosse, ten players constitute a full team. This includes a goaltender, defensemen, midfielders and attackmen. Teams are allowed to play with fewer than ten players if injuries or penalty accumulation affects the team roster size. There can be a maximum of four players - usually all three defensemen plus one midfielder - using long crosses.

In women’s field lacrosse, twelve players constitute a full team. This is most often split up into one goaltender, four defenders, three midfielders and four attackers. Teams are allowed to play with fewer than twelve players if injuries or penalty accumulation affects the overall team roster size.

There are lots of penalties and fouls in lacrosse, but they can mostly be divided into two main categories called technical fouls, personal fouls. For example, slashing is a common personal foul that involves a player hitting another player with the shaft of the stick. Some examples of technical fouls include offsides and holding. Other types of penalties include unsportsmanlike conduct and delay of game.

Teams score points by shooting the ball into the goal without incurring any penalties on the scoring play such as a crease violation or illegal stick. The entirety of the ball must cross the goal line in order for a point to count.

The attack for each team will set up offensive formations or try to start a fast break after a turnover in order to create scoring chances. The defense and goaltender on the opposing team aim to make a save or cause a turnover to win back possession of the ball.

The team with the most points at the end of regulation play and overtime (if necessary) wins the game.

A field lacrosse game is 60 minutes long with a ten-minute halftime period.

An indoor lacrosse game is 45 minutes in total, divided into three 15-minute periods.

The team with the most points at the end of the game wins. If the game is tied at the end of regulation play, teams compete in sudden-death overtime, and the team that scores the first goal is immediately declared the winner.

If a player commits a foul or penalty, they must wait in the penalty box for 30 seconds to three minutes, and up to a full ejection from the game depending on the severity of the penalty. A penalty will result in a change of possession or a free position shot depending on the nature of the foul and the field positioning where the foul occurred.

Substitutions in lacrosse can be made during the run of play and players must exchange through the substitution area. Substitutions can also occur during certain stoppages of play.

The lacrosse ball is made of solid rubber and weighs approximately 5 ounces and is about 8 inches in circumference.