Lacrosse Pushing (From Behind) Penalty 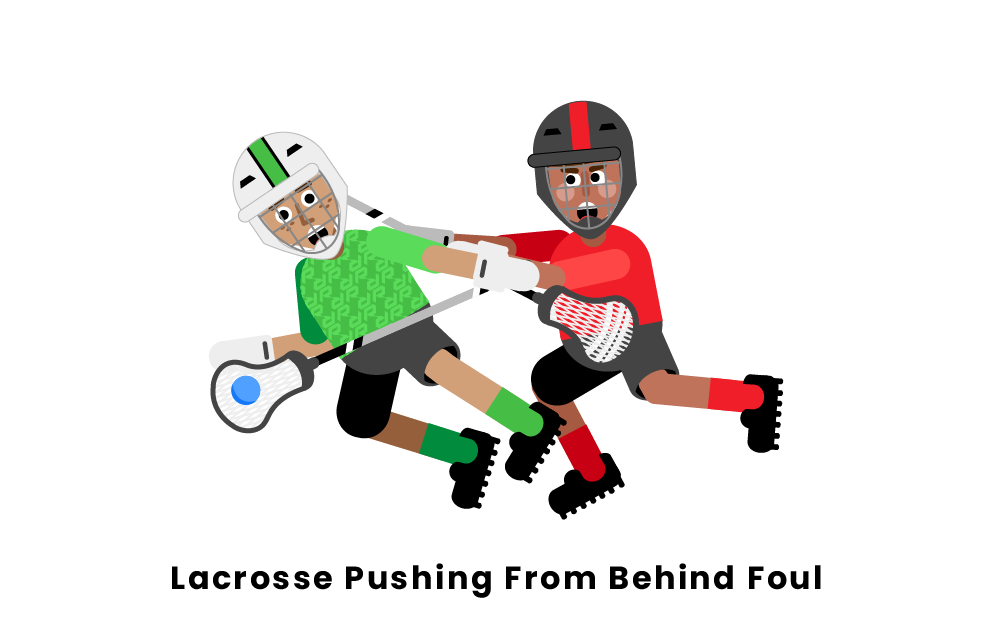 A pushing from behind penalty in lacrosse is a penalty given for shoving an opposing player from behind using their hands, arms, or stick. This penalty often occurs when opposing players are fighting for a ground ball or when the defender loses their position on a ball carrier.

Pushing is allowed in lacrosse from the front or side when a player is in possession of the ball or if two players are within 3-5 yards of a loose ball, but never from behind. A player must always keep both hands on their crosse when engaging in a legal push. Pushing from behind is a penalty that is called when a defender uses his forearms or hands to push a player in the back with the intention of knocking the ball carrier down, or at the very least, to disrupt their momentum.

Physical contact from behind or on unsuspecting opponents is extremely dangerous in any sport and can lead to potential injuries. When a player can see the contact coming, they have the ability to brace and prepare. This rule, like many, serves to protect ball carriers from contact being initiated while they are in a compromising, vulnerable position.

Due to the physical nature of lacrosse, these penalty calls can often be considered subjective and very situationally dependent. While pushing from behind is not allowed, if a ball carrier knowingly turns his back in order to make the initially-legal contact illegal, the defender is not called for pushing from behind.

Pushing from behind penalties are categorized as technical fouls, which are considered a less serious violation. Since lacrosse is played at such a fast pace, there are likely to be scenarios where it is difficult to differentiate whether the defender is pushing from behind or committing an illegal body check, which is a foul that results in a lengthier penalty sentence.

In the NCAA, high school lacrosse, and youth lacrosse, pushing from behind is classified as a technical foul. This means that one of two punishments can be doled out depending on the scenario. If the foul happens when neither team is in possession of the ball, then possession is awarded to the team that was fouled. However, if the foul occurs while a player is in possession of the ball, the player who committed the foul must serve a 30-second releasable penalty. This would leave their team with one less player for thirty seconds or until a goal is scored. 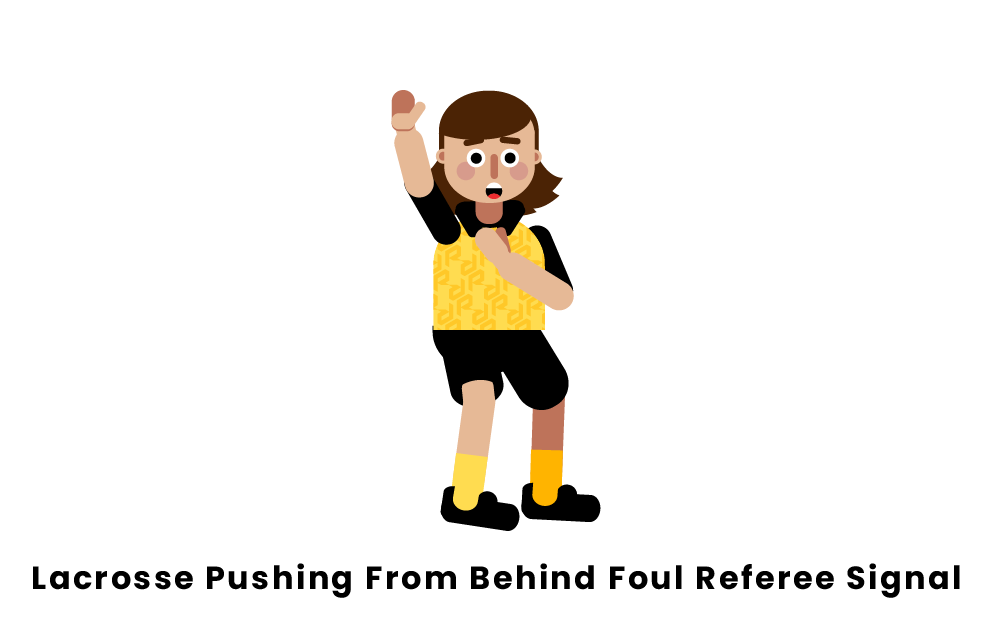 In lacrosse, the referee will blow their whistle to stop play if the foul is committed while the ball is loose or throw a penalty flag if the offense has possession of the ball when the penalty occurs. To signal a pushing from behind penalty, the referee places their left hand flat on their chest and extends their right arm straight forward with an open palm and their fingers pointing to the sky. The referee will initiate a quick restart on a loose ball push from behind or specify the player to serve the 30-second penalty if committed by the defense.

Similar Penalties to Pushing (From Behind)

What is a pushing penalty in lacrosse?

A pushing penalty in lacrosse is when a player pushes another player using his hands or forearms to shove another player in the back. Pushing in lacrosse is entirely legal when a defender approaches a ball carrier from the front or side or when the two players are within 5 yards of a loose ball, although their hands must always remain on their crosse. However, it becomes a punishable offense once the push happens from behind the opponent.

What are the consequences of being called for pushing in lacrosse?

The consequences of being called for pushing from behind in lacrosse are rather consistent across all levels of lacrosse, which is not surprising given that USA Lacrosse is the governing board for all USA Youth Lacrosse as well as contributing to the USA National High School rules. Pushing from behind in lacrosse is considered to be a technical foul, a less serious infraction that results in the team that was fouled receiving possession of the ball or the player who committed the foul serving a 30-second penalty off the field.

When is pushing legal in lacrosse?

There are no circumstances that make a push from behind legal, but there are certain circumstances where general pushing is legal, which means that knowing the specifics of the rules is crucial in avoiding penalties. When two players are within 5 yards of a loose ball, then pushing with closed hands or forearms is legal from the front or side. Defenders can also legally push a ball carrier when they are approaching from the front or side, which means that taking an extra step or a slightly different angle is the difference between being called for a penalty and not.

Pages Related to Lacrosse Pushing (From Behind) Penalty