Lacrosse is a game of offense against defense. The team with the ball is on offense. Players on offense are called offensive players, attackers or the attack. At even strength, the attack has six players working together on offense, including three attackers and three midfielders. In this tutorial, we will learn more about the lacrosse offense. 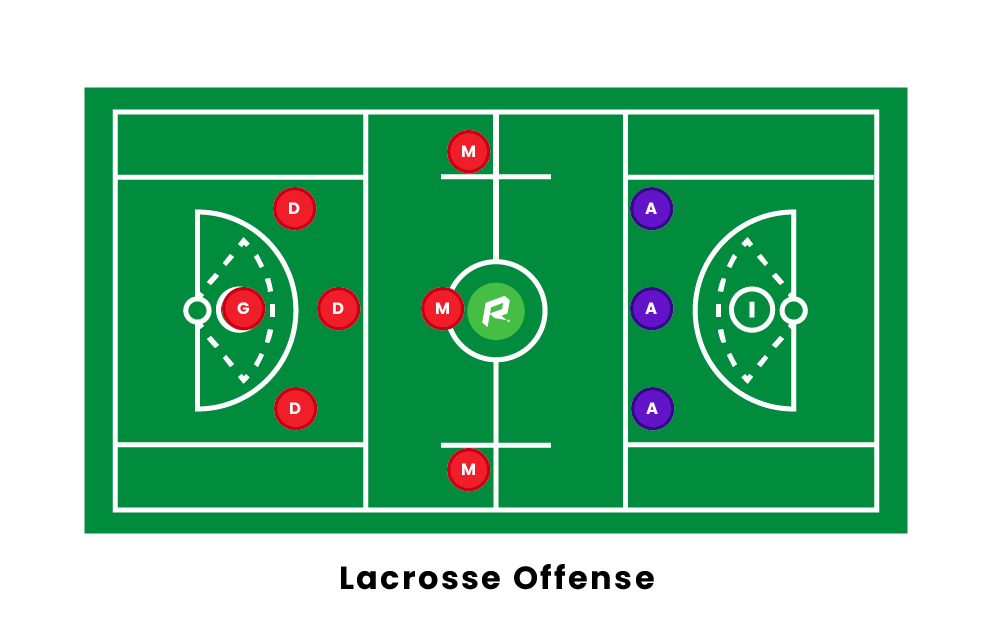 When the attack is on offense, they have the following objectives:

The offense uses passing, catching, driving, cutting and feeding to create scoring opportunities and maintain possession. All players on the offense must work together and communicate to make the offense run smoothly. The head coach and offensive coordinator help design plays and train the attack to run as a unit, rather than six individual players with different objectives.

If the attack scores a goal, the players reset and prepare for a face-off. If the defense wins possession with a goalie save or caused turnover, the attacking players attempt to win the ball back by riding the opposing defenders. A ride is when the attacking players quickly transition on to defense on a clear or turnover to try and pin the defense in their own half and slow down the fast break. At halftime, there is a change of goals. Teams switch the goals that they are defending, and the offense must adjust to moving in the opposite direction.

In addition to running plays and keeping possession, there are a few rules that the offense must keep in mind to avoid a technical penalty. These include:

A stall in lacrosse is when the team in possession of the ball uses the time clock to their advantage in order to preserve their lead. During a stall, the offense will often bring the ball behind the cage to force the defensemen to chase and put pressure on the ball handler. Unless the defense pressures out towards the perimeter, the stalling team can simply stand with the ball without being forced to make passes or attempt a shot on goal.

There are four main types of offense in lacrosse:

In settled offense, the attack has possession in their scoring half and the defensive side has had time to set up a zone defense or man to man defense. The pace in a settled situation is slower than a fast break. During settled offense, teams will often run set plays.

A motion offense in lacrosse is an offensive system that uses quick passes between attacking teammates and continuous player movement. It can be a very successful offense when executed well because the defense has to work hard to follow both the ball and players always on the move.

In transition offense, the offense aims to take advantage of unsettled situations to create a fast break opportunity.

The zone offense in lacrosse is an offensive formation strategy where attacking players spread themselves out across the offensive area and play within assigned zones. Examples of zone offenses include a 2-2-2 formation or a 2-3-1 zone offense.