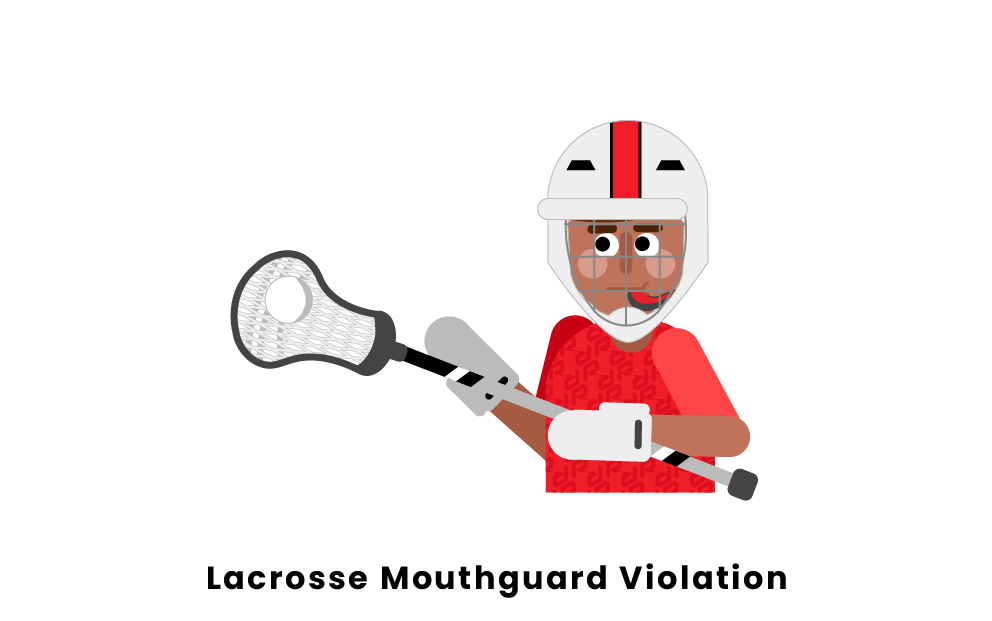 In lacrosse, a mouthguard is one of the most important pieces of equipment players are required to wear. These protective devices guard the player’s teeth and jaw against sustaining an injury during play, either from accidental or intentional strikes from the lacrosse ball, lacrosse sticks, or other players. Since it is important to wear a mouthguard safely and correctly, penalties can be issued to lacrosse players who do not correctly wear their mouthguard during gameplay or refuse to wear mouthpieces. This rule has recently been an emphasis of lacrosse referees, especially in youth and high school leagues.

There are many rules in lacrosse regarding the wearing of mouthpieces. In NCAA and US Youth Lacrosse, all players, including goalkeepers, must wear a mouthguard that covers all the teeth of the upper jaw. NCAA Rules require that mouthpieces be of a highly-visible color, as clear mouthguards can often be invisible from far away. However, clear mouthguards can be allowed if they are used on account of a provable medical issue. In NFHS Lacrosse, all colors of mouthguard are permitted except for mouthguards that are completely white or completely clear. Mouthguards for NFHS can also cover either all upper teeth or all lower teeth, whereas the NCAA requires mouthpieces to cover the upper teeth.

There are a few different offenses that can result in a mouthpiece violation in lacrosse. For example, a player can be penalized for not wearing a mouthguard, though this rule is usually suspended if the mouthpiece happens to fall out accidentally during play. Players can also be penalized for wearing a mouthpiece incorrectly. One such illegal method is known as “fish-hooking” the mouthpiece. “Fish-hooking” occurs when a player wears their mouthguard dangling from their mouth, with the curved portion emerging from the side of their lips like a fish hook.

Mouthguard penalties have undergone many changes over recent years as investigations and inquiries into injuries have increased. Certain leagues, such as the NCAA, have completely eliminated clear mouthguards, while others have permitted them to some extent. Other changes that have occurred included the switching of a mouthguard violation from a personal foul to a technical foul in most Youth Lacrosse leagues, which occurred in 2017. Meanwhile, the NCAA continues to view mouthguard violations as a personal foul.

In NCAA Lacrosse, mouthguard violations are a personal foul, considered an Illegal Use of Equipment. Personal fouls in lacrosse result in a non-releasable penalty of one to three minutes, which means that the player must sit out for the entirety of their penalty time, even if a goal is scored during that time. However, in NFHS Lacrosse, a mouthguard violation is a technical foul, and in US Youth Lacrosse, it is a technical foul for Illegal Procedure. For a technical foul, penalties include immediate turnover of the ball if the foul is incurred by the offense and a 30-second releasable penalty if it is incurred by the defense. 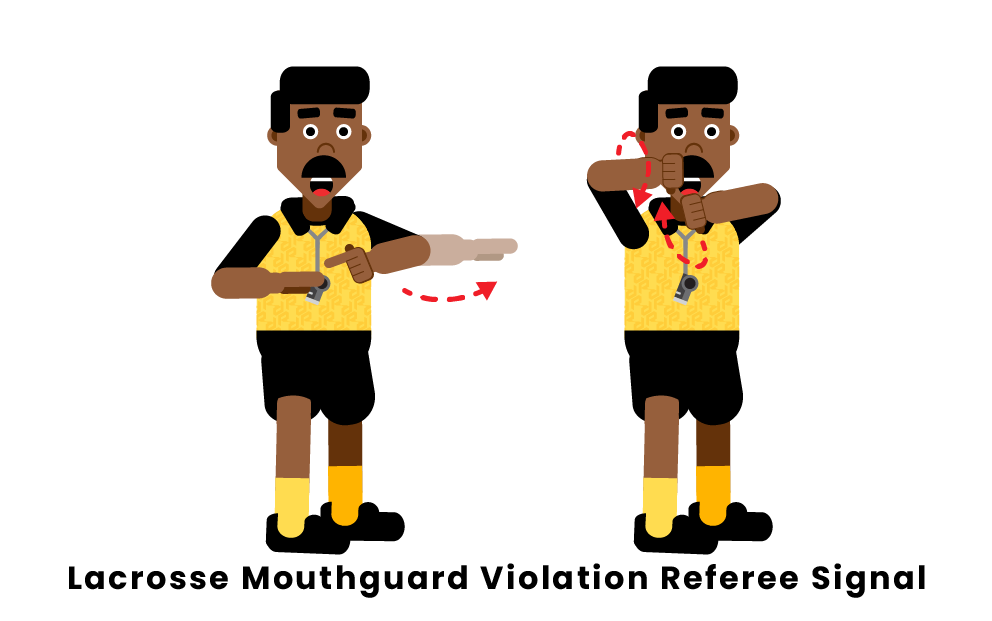 What is a mouthguard violation in lacrosse?

A mouthguard violation in lacrosse occurs whenever a member of a team improperly wears or refuses to wear a mouthpiece. Mouthpieces are important in lacrosse, as they protect a player’s teeth from injury. Therefore, it is illegal to refuse to wear a mouthguard in lacrosse or to wear them incorrectly, such as by fish-hooking them and leaving them dangling from the mouth. Some lacrosse leagues also forbid certain color mouthpieces, such as clear or white mouthguards, which can make it hard to see if a player is wearing a mouthpiece.

What are the consequences of being called for a mouthguard violation in lacrosse?

Are mouthguards required in lacrosse?

Mouthguards are required in all levels of lacrosse. Since lacrosse is such a physical sport, mouthguards are vital for the prevention of injury to a player’s teeth and jaw. Lacrosse balls, sticks, and even other players can all cause serious injuries to a player who is not wearing a mouthguard, or wearing one improperly, such as by fish-hooking. Therefore, it is important that all lacrosse players wear mouthguards and wear them correctly, which is why not doing so is penalized in most lacrosse rulebooks.