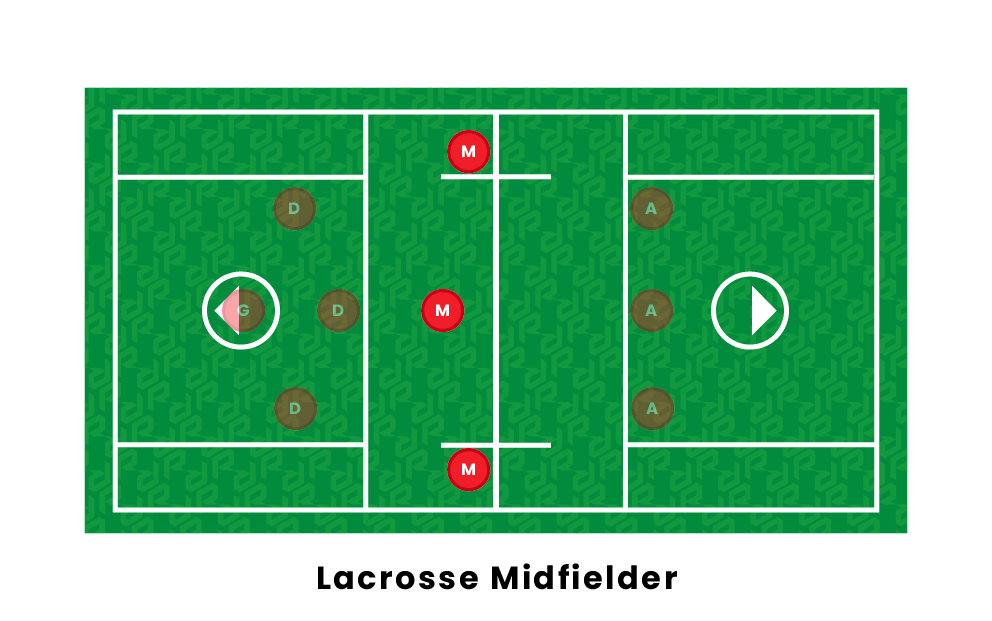 In this tutorial, we will review the job description, key skills, and specific position types for a lacrosse midfielder.

The main objective of a midfielder is to transition the ball from defense to offense by maintaining possession. Midfielders must possess strong passing abilities. A ball in flight will always move faster than a player running with the ball while cradling, so connecting passes to advance the ball upfield or swing the ball from one side of the field to another is critically important.

Midfielders should have high levels of endurance and physical fitness, since they cover most of the field.

Passing, catching, dodging, stick handling and ball handling are required skills when the midfielder's team has possession of the ball. When defending in the midfield, the goal is more often to slow down the opposing team first, and cause turnovers second. A quick drop step is key to play on a north-south angle. In the case of dropped or wayward passes, the ball is a ground ball or loose ball throughout the midfield area, or neutral zone. Therefore midfielders must be adept at scooping loose balls.

Field vision and awareness is also important, and midfielders should watch for developing offsides risks. Three midfielders join the three attackers on offense in men's lacrosse, so it is important that players communicate to their teammates as they cross the restraining line. Many coaches initiate on-the-fly substitutions during a midfield transition to stack the defense or offense. If teams are not careful, the unsettled nature of a clear or fast break can lead to close calls or penalties for offsides.

There are several position types that fall under the broader category of a midfielder. These include:

An attacking midfielder is more likely to join the attackman on offense and is a serious scoring threat. This role looks to feed low attackers, retain the ball around the perimeter of the critical goal area and take perimeter shots when available.

The FOGO, or face-off get off player, is a type of midfielder who specializes in taking the face-off. Usually, this player will immediately be substituted out of play once possession is established.

The winger is a middie that specializes in playing on the wings or alleys. One of their main jobs is releasing from the restraining lines during a face-off and challenging for loose balls.