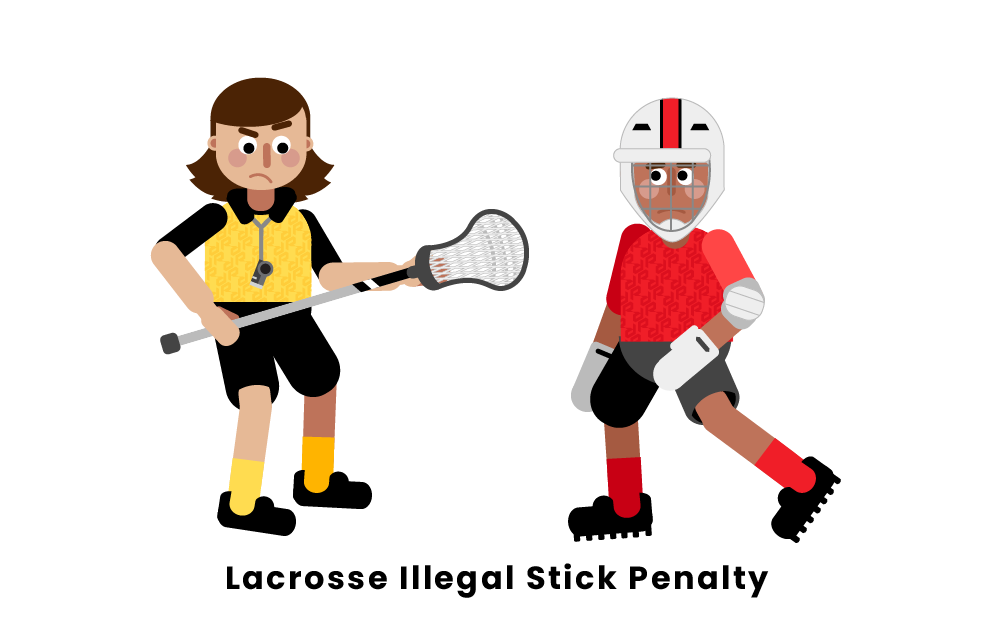 The most important piece of equipment in lacrosse is the lacrosse stick, also known as the “crosse.” Due to the importance of the lacrosse stick, there are strict rules surrounding the usage of the stick, specifically the way in which it is strung and constructed. Referees have the ability to check any player’s stick throughout the game and will frequently perform “stick checks” during timeouts, after goals, or in between quarters. If a lacrosse player is found to be using a crosse that does not conform with stick regulations, they may suffer an illegal crosse penalty.

It is illegal for lacrosse sticks to have too deep of a pocket. This is the most common reason for illegal cross penalties being called. If the upper edge of a ball placed in the pocket of a level stick is obscured by the sidewall string that holds the meshing, the stick is legal, but if the ball sinks beyond the sidewall string and is in full view, the stick is illegal. It is also possible to receive an illegal stick penalty for having a pull string, a string at the bottom of the stick which, when pulled, will make the pocket shallower and can disguise a deep pocket. Finally, there are strict regulations regarding the shooting strings of a lacrosse stick; all shooting strings must sit within 4 inches of the top of the scoop. Other violations regarding strings can include having long hanging strings, more than two sidewall strings, or deceptive multicolored meshing.

All lacrosse sticks must comply with ball retainment rules. The first test for ball retainment is the forward tilt test, where a ball is placed in the pocket and the stick is slowly tilted forward. If the ball pops out of the pocket before the head is parallel with the ground, the stick is legal. The lateral tilt test follows the same rules, only with the stick being held horizontally and rotated to allow the ball to fall out from the side of the pocket. The perpendicular tilt test involves placing the ball in the deepest part of the pocket and then tilting the head of the stick slowly downward until it is perpendicular, with the stick being legal if the ball rolls out before the stick reaches a 90-degree angle.

In US Youth Lacrosse, the penalty for an illegal stick is two minutes regardless of the infraction, and all infractions can be corrected to allow the crosse to be used in the game. Sticks with illegal hanging string lengths or without an end cap can be corrected without receiving a penalty but will be penalized if they are used after the warning without correction. 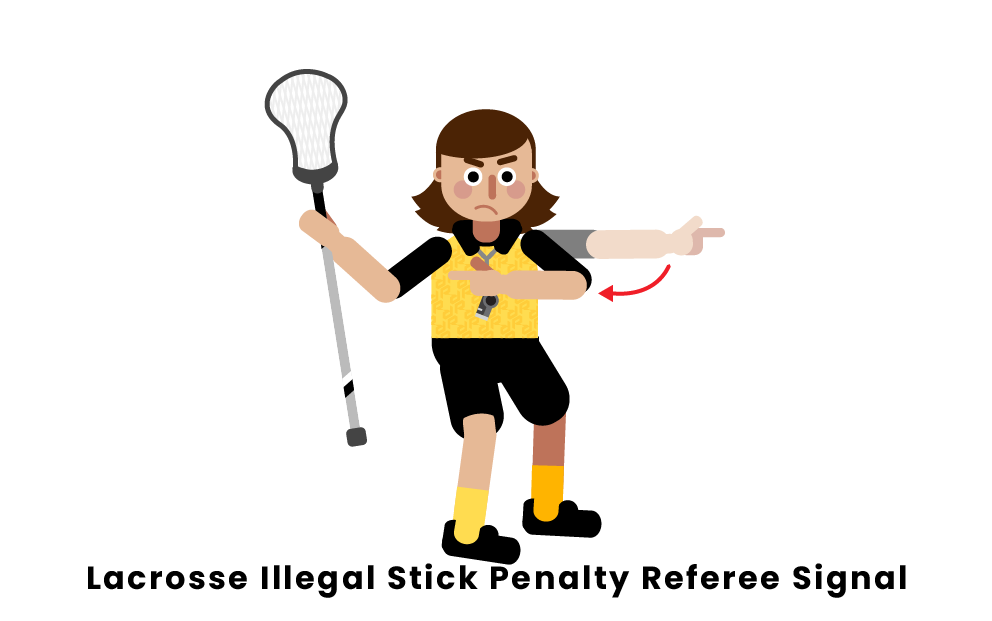 In both NCAA and US Youth Lacrosse, the penalty for an illegal crosse is the same. It involves the official holding up the illegal stick and bending his opposite elbow across his chest with his index finger extended to point at the illegal stick. This signal is also used for any other illegal equipment penalty in a lacrosse game.

What is an illegal stick penalty in lacrosse?

In lacrosse, an illegal stick penalty occurs whenever a player’s stick does not meet the required standards for a lacrosse stick set by leagues and the sport’s governing bodies. These standards constitute four major categories: stick measurements, pocket legality, ball retainment, and other miscellaneous standards. If a stick fails to meet any of these standards, an illegal stick penalty will be called, and the stick itself may be prohibited from play.

What are the consequences of being called for an illegal stick penalty in lacrosse?

If a player in a lacrosse game is found to be using an illegal stick, NCAA rules require the imposition of a one to three-minute non-releasable penalty, meaning that the player must serve the whole penalty regardless of whether the opposing team scores a goal. The illegal stick will also be removed from play. For some illegal stick violations, such as a deep pocket, a one-minute penalty is imposed, and the stick can still be used if corrected. In US Youth Lacrosse, any stick violation can be corrected and the stick reused, but the penalty is two minutes. However, illegal string lengths or missing end caps can be corrected without penalty.

Can coaches request a “stick check” in lacrosse?

Yes, coaches in lacrosse can request a stick check if they are concerned that an opposing player is using an illegal stick. Coaches will often request a stick check in the event of a goal because if a stick used to score a goal is found to be illegal directly afterwards, and before the next whistle, the goal is nullified. However, the goal is not nullified if the stick being inspected belongs to a player who fed the ball to the player who scored the goal, even if the crosse is found to be illegal. Coaches must call for a stick inspection before the whistle to begin the next play.