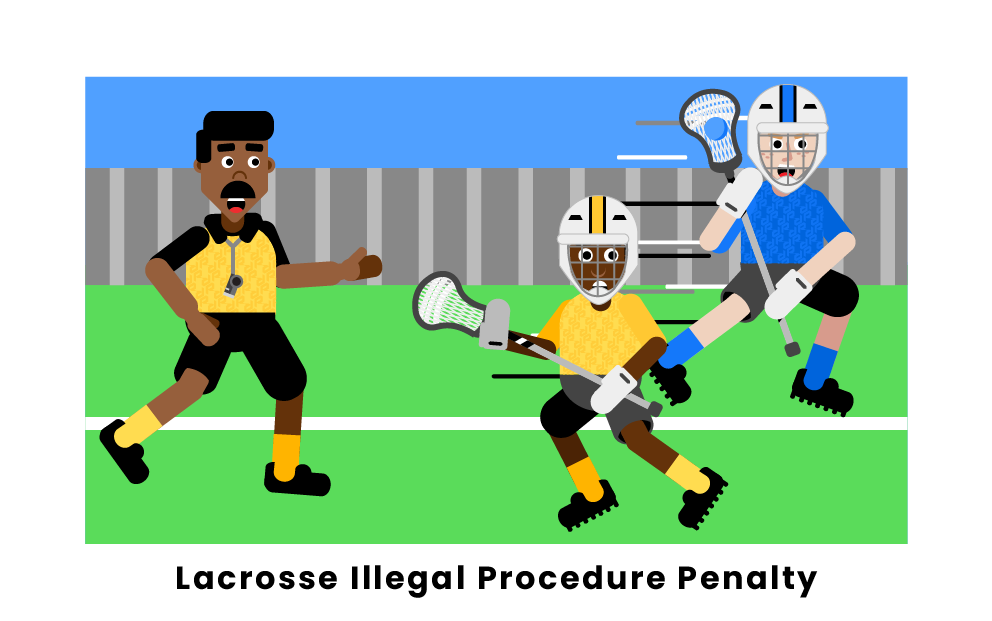 Illegal procedures in men's lacrosse are broadly encompassing penalties considered technical fouls. A player or team may commit this foul by performing various violations such as being in the wrong positioning during a face-off, participating in the game while being out of bounds, or having more than ten men on the field at any time.

Illegal procedures in men's lacrosse refer to many different offenses performed by either a team or individual player. These penalties are any action of a technical nature by a player that does not conform to the rules. Examples include failure to advance, touching the ball with the hands, delaying the game, having too many players on the field, and entering the game from the penalty box before their time is up. These offenses count as a technical foul, which results in a lesser punishment than a personal foul. Illegal procedure penalties are given for minor infractions and typically pose little to no risk to the opposing player.

The result for getting an illegal procedure penalty in men's lacrosse varies. Under USA Lacrosse rules, the punishment is dependent on the offender being on offense or defense. If the player who committed the penalty is on offense, the team loses possession. When a defensive player commits the penalty, a flag will be thrown to signal a 30-second releasable penalty assessed to the team on defense. This means the offending team will play man-down for 30 seconds or until a goal is scored. If the penalty is committed during a loose ball, possession will be awarded to the non-offending team. The rules are enforced the same way in NCAA Men's Lacrosse and professional leagues as well. 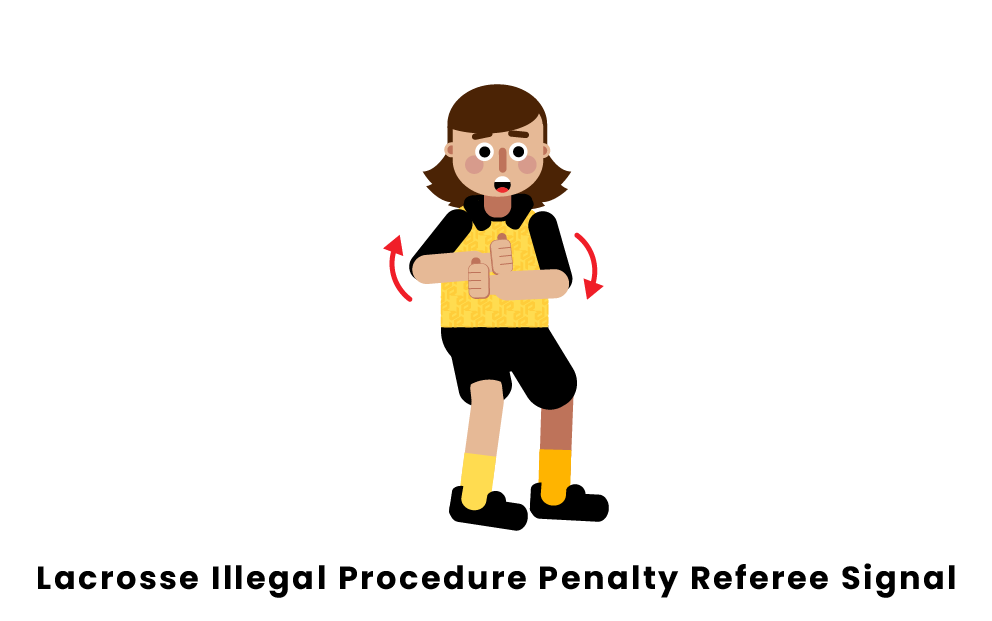 When a referee observes a player performing an illegal procedure during play, the referee will throw a flag and stop play either at the moment of the penalty or after possession has changed, depending on which side committed the penalty. The hand signal performed by the referee uses two closed fists, rotating them around each other at chest height and extending the arms. The referee makes the call at their discretion and will assess a technical foul or 30-second releasable penalty to the guilty party.

What is an illegal procedure in lacrosse?

Illegal procedure penalties are a minor type of technical foul in most competitive men's lacrosse levels. These fouls are called for a player or team violating specific rules relating to gameplay in the lacrosse handbook. These violations are typically not dangerous nor pose any bodily risk to the opposing team outside of a competitive disadvantage in the game. Due to the varying offenses that qualify as an illegal procedure penalty, the calls are made on the field according to the referee's judgment.

What are the consequences of being called for an illegal procedure in lacrosse?

The consequence for getting an illegal procedure penalty in men's lacrosse can vary by league and level of play.  According to the USA Men's Lacrosse & NCAA Official Rulebook, these are quantified as "technical fouls" and are punished as such. If the offender has control of the ball, they then lose possession as punishment. If the offender is on defense, then there is a 30-second penalty given to the offending team, during which they must play a man-down.

What are some examples of illegal procedures in lacrosse?

Many different actions can be performed by players that call for an illegal procedure penalty. Examples include failure to advance, touching the ball with the hands, delaying the game, having too many players on the field, and entering the game from the penalty box before a player’s time is up. Other instances that can result in the penalty being called are being in the wrong positioning during a face-off, having more than four long sticks on the field at one time, and t for a player not having a mouthpiece in their mouth.