How Does Scoring Work In Lacrosse? 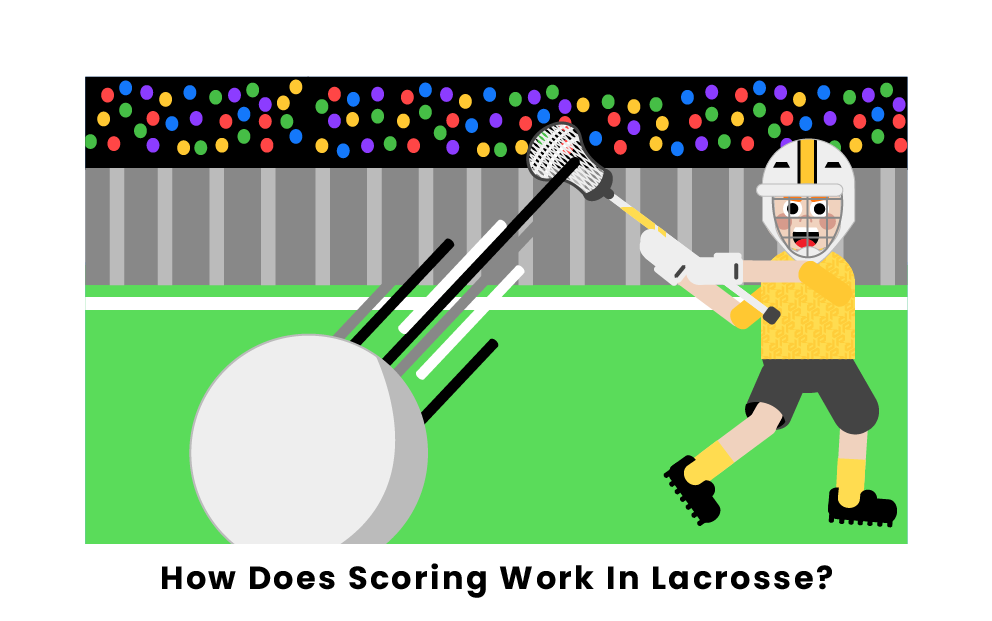 In lacrosse, players score by shooting the lacrosse ball into their opponent’s goal.

Lacrosse is played between two teams of 10 players utilizing lacrosse sticks, a ball, and two goals. Regulation lacrosse fields are 110 yards long and 60 yards wide, with each team’s goal placed on opposite sides. After four quarters of play (the length of each quarter will vary based on the level of play), the team with the most goals will be declared the winner.

Like most other “ball and goal” sports, scoring in lacrosse is as simple as getting the ball in the goal. Players can score from anywhere on the field, except for within the opposing team’s crease, which is the circle that surrounds the goal. Players on each team are split into positions for attack, midfield, defense, or goalie. Any player on the field can score, but it is much more common for attackmen or midfielders to score the majority of goals.

Each goal scored earns 1 point for the offensive team, regardless of where the goal is shot from. Goals are always worth only one point in lacrosse, except in the Premier Lacrosse League, where a “two-point goal” was implemented for if a player shoots from behind the designated two-point line on the field.

To receive points in lacrosse, offensive players will attempt to score on the opponent’s goal using offensive plays that lead to a shot attempt. Ideally, an offensive player will shoot the ball past the defense and goalie to score a goal. Lacrosse plays involve lots of movement, passing, screens, and communication to be executed properly. Even if the ball enters a team’s goal by accident, without a player shooting it, or by the own team’s defense or goalie touching the ball, the point still counts for the opposing team.

In the Premier Lacrosse League (PLL), there is a unique feature known as the two-point line. The two point line is an arc placed 15 yards away from the goal. If a player scores from behind this line, the goal is worth two points, while scoring from inside the line earns one point. The two point line was added in the inaugural season of the PLL in 2019. This feature was used previously in other professional lacrosse leagues to make the game more fast-paced and exciting, but has never been implemented in college or youth lacrosse. 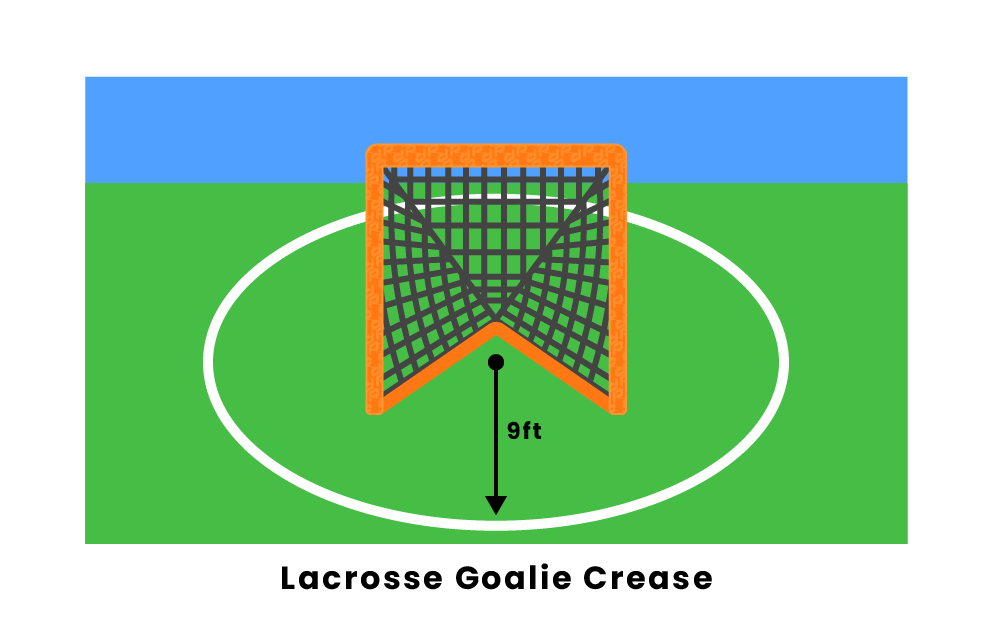 Surrounding both goals in a lacrosse game is a circle with a nine-foot radius, known as the goalie crease. The goalie crease is an area that no opposing player is allowed to be in or shoot from. If an opposing player scores a goal while having their feet in the crease, the goal will be disallowed. However, attacking players are permitted to jump and shoot through the crease. Defensive players are allowed to cross through the crease.

In lacrosse, players will occasionally receive a penalty, resulting in them being removed from the field and sitting in the penalty box for a specified amount of time that varies by penalty. During this time, the opposing team will have a numbers advantage on the field or a “man-up situation.” In contrast, the team that committed the penalty will be a “man-down.” While a player is serving his penalty, the other team will have one additional player on the field in comparison, giving them a significant edge on offense. For this reason, many goals are scored in “man-up situations” or as a result penalties.

The scoring rules in lacrosse change during the overtime period. In overtime, the first team to score a goal is immediately declared the winner, known as “sudden-death.” This creates a heightened intensity for both the offense and defense. In collegiate play, teams play as many four-minute intervals as necessary to decide the winner with two-minute breaks in between each period. In indoor lacrosse, the length of each overtime period is 15 minutes.

In general, women’s lacrosse scoring rules are the same as men’s lacrosse. Each goal counts as one point. Where the games differ is on penalty shots and post-goal procedures. Certain penalties that occur in the critical scoring area result in a free position shot on the eight-meter arc. After each goal is scored in women’s lacrosse, the attacking player who shot the ball and scored must immediately drop their stick so that the referee can conduct a stick check. The referee places the ball in the stick pocket to ensure that the pocket depth does not exceed the allowable level; the official must be able to see the top of the ball over the side wall of the stick head.

In professional lacrosse, points are a statistic kept separately from goals. Both goals and assists count towards a player or teams’ point total on the stat sheet. It is important to note that statistical points are different from in-game points, and they have no effect on an individual game’s score. Points are a useful statistical tool for analyzing a player’s offensive performance and for tie-breaking situations.

Points per game is a statistic that measures the offensive strength of a team. It divides the number of points scored by the total number of games in the season.

What is the scoring area called in lacrosse?

In men’s lacrosse, a player can score from anywhere on the field, except within the opposing team’s crease. However, the area where most scoring generally takes place is the attack area, or box. The attack area is the large rectangular box surrounding the other team’s goal, where attackmen spend most of their time.

In the Premier Lacrosse League, there is an additional 2 point line drawn as a semicircle 15 yards out from the goal within the attack area. Scoring in front of this line results in 1 point, and scoring from behind the line results in 2 points. This is not common in most lacrosse leagues and is only currently used by the PLL.

In women’s lacrosse, the critical scoring area is the area 15 meters out from the front and sides of the goal, and 9 meters behind the goal. The field within this area is marked with an 8 meter line and 12 meter fan.

How do substitutions work in lacrosse?

Who can score in lacrosse?

Any player on the field can score in lacrosse, even the goalie. Players may even score on their own goal, which would count as a point for the opposing team. However, most of the scoring is done by either attackmen or midfielders. It is rare to see a defenseman or goalie score, although it does happen on occasion.

What is the objective of lacrosse?

The object of lacrosse is simple, to score more goals than the opposing team before time expires. Points are scored by getting the ball in the other team’s goal, ideally with a shot attempt. Every time the ball enters the goal, the opposing team is awarded 1 point (except in some professional lacrosse leagues where there are 2 point goals). Players may not handle the ball with their hands but are instead equipped with sticks that have a mesh pocket on one end to carry the ball. The sport is played on a large field 110 yards long by 60 yards wide. Players are divided into defense, midfield, attack, and one goalie for each team.

Pages Related to How Does Scoring Work In Lacrosse?