Halftime in lacrosse is the period between the first and second half when play is paused and teams group together on the sidelines to rest and discuss strategy. In this tutorial, we will cover the structure and duration of halftime, the strategies that coaches employ during halftime and the procedure for restarting the game after halftime ends.

Halftime is an obligatory stoppage of play between the first half and the second half. When the game clock reaches the end of the first half or second quarter, a game clock or air horn signals to the official and the players on the field that it is time for halftime. In men’s and women’s collegiate level lacrosse, halftime is ten minutes long. In Major League Lacrosse, halftime is 15 minutes long. The timekeeper tracks the elapsed time at the scorer’s table on the sideline. In indoor lacrosse, there is no halftime. Instead, there is a stoppage of play after the end of the first period and the end of the second period. The break between each period lasts two minutes.

During halftime, players group together at each respective team area on the sideline. Players are allowed to exit the field of play and step out-of-bounds, and players on the team bench can step onto the field. Typically the head coach will address the full team to discuss tactics and strategy, reviewing the first half and instructing any changes that must occur moving into the second half. The offensive coordinator and defensive coordinator may separately coach the attack and the defense, while a goalie coach may warm up a substitute goalie or discuss the performance with the starting goaltender. At halftime, the coach can make substitutions. Starters or players who had significant playing time during the first half can take advantage of the pause at halftime to rehydrate, refuel, or quickly address physical ailments like muscle cramps. 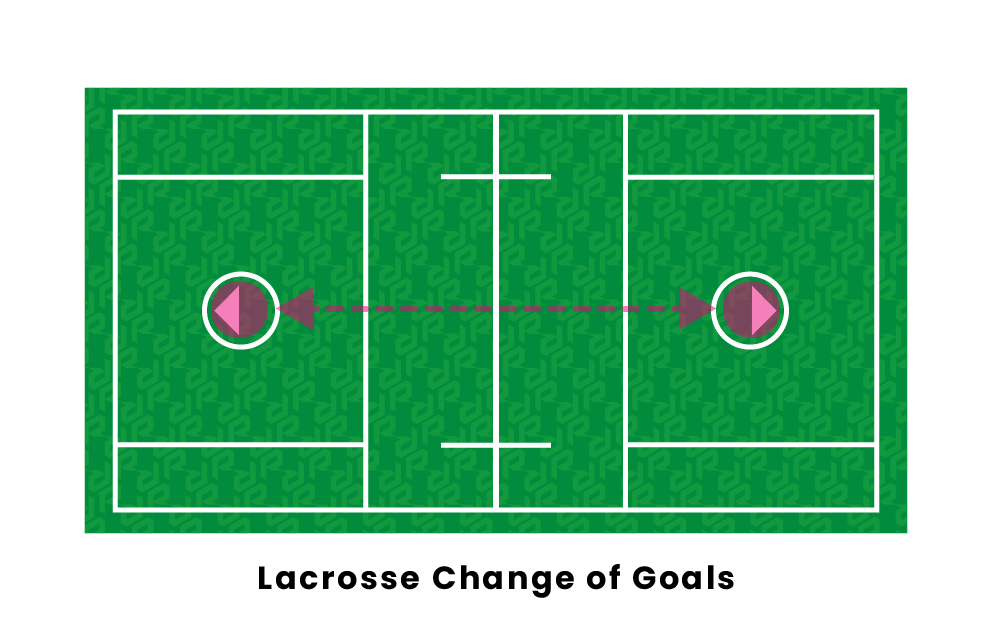 When the halftime period is over, the game clock or air horn signals that players should retake the field. Substitutes and coaches return to the sideline area and players on the field change goals. The change of goals in lacrosse is when the opposing teams switch sides of the field, reversing their defensive and offensive areas. The change of goals allows each team to have the same opportunity to defend and attack the same halves. The change of goals is especially important in the case of outdoor conditions such as wind, sun or field terrain that may create an uneven advantage.

When players are in the appropriate positions behind the restraining line and wing areas, a face-off at the center line resumes play.