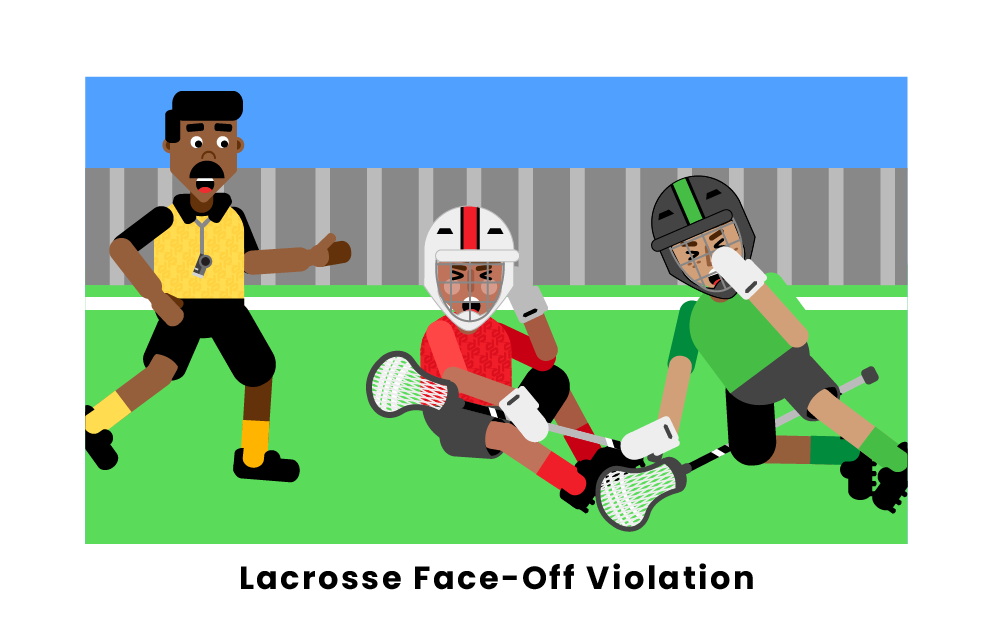 In lacrosse, a face-off occurs at the beginning of each period and after each goal to decide which team will gain possession. In a face-off, both teams send a player to the middle of the field to compete for the ball. The two players kneel on the ground with their backs to their respective goalies and then attempt to grapple the ball away from each other after the referee blows his whistle. There are many different actions that can be classified as a face-off violation.

During a game of lacrosse, a face-off happens whenever a period begins or after either team scores a goal. Face-offs can also occur during certain special circumstances of a game, such as in the case of injuries or simultaneous fouls by both teams. In a face-off, two players from opposing teams crouch facing each other with their sticks held parallel so that the netted portion faces their right side. The ball is placed between the player’s sticks by the referee, who then has the players set their positions, backs off, and blows his whistle. The two players fight over the ball at the whistle to see who can retrieve it first and gain possession.

Due to this complex procedure, there are many violations that can occur during a lacrosse face-off and subsequently be penalized by the referee. Face-off violations can be called if face-off players hold the heads of their sticks to the left side of their body during a face-off, as it is against the rules to do so. Additionally, a face-off violation occurs whenever a player in the face-off position moves from his position prior to the referee’s whistle. Face-off players also cannot allow any part of their body to encroach upon their opponent’s side of the face-off line before the whistle blows. If a referee has to verbally warn a player to adjust their face-off position too many times, a face-off violation may also be called.

There are other actions that also constitute a face-off violation in lacrosse. It is illegal for players facing off to make any loud or distracting noises in an attempt to intimidate their opponent into jumping before the whistle. It is also illegal for face-off players to use their hands to hold down their opponent’s stick in order to stop them from getting the ball. Face-off players cannot put any part of their bodies on the head of an opponent’s stick or touch the ball with their hands or fingers. It is illegal to kick an opponent’s stick during a face-off or to hold the ball in place for more than several seconds without a teammate to assist. Face-off players cannot have the ball on the back of their sticks for more than a single step after winning the face-off without receiving a violation. Finally, it is illegal for any team to send its goalie to face-off.

If a player commits a face-off violation, the referee will stop the face-off and award the ball to the opposing team. If both players commit a violation during the face-off, it will be redone. In most lacrosse leagues, face-off violations contribute to a team’s overall violation count. A single violation may not cause any penalties, but if three team-wide violations occur throughout a half, a 30-second technical foul is given to one of the team’s players and is given out for every additional violation after the third. During a technical foul, the offending player kneels in the penalty box for 30 seconds, during which time his team plays at a disadvantage. If a player attempts to use their hands to play the ball during a face-off or grab their opponent’s stick, an unsportsmanlike conduct penalty is given, which is a personal foul, often earning a one to three-minute suspension from the game. 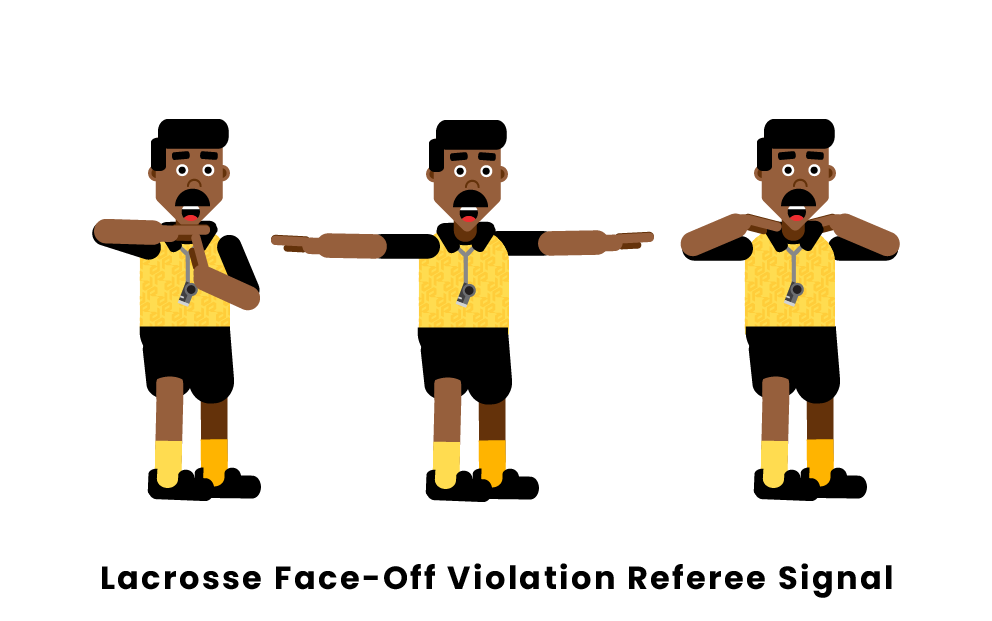 Similar Penalties to a Face-Off Violation

What is a face-off violation in lacrosse?

In lacrosse, a face-off violation occurs whenever a player participating in a face-off follows improper procedures for a face-off play. There are various types of face-off violations, including touching the ball with one’s hands or fingers, going early on the face-off, pinning down an opponent’s stick, or not holding one’s stick with the crosse to the right side of the body. Face-off violations contribute to a team’s overall violation count, resulting in penalties in some leagues if it rises above three violations over the course of a half.

What are the consequences of being called for a face-off violation in lacrosse?

In lacrosse, a single violation usually results in no penalties. However, committing a face-off violation will forfeit your chance at the face-off and award the ball to the other team. In some leagues, if a team commits three violations during a half, the offending player on the third violation receives a 30-second technical foul and must kneel in the penalty box for 30 seconds. A similar foul is given out for every violation after the third. If a player plays the ball with their hands during a face-off or grabs their opponent’s stick, they receive an unsportsmanlike conduct penalty and anywhere from a one to three-minute suspension from play.

Players engaging in a face-off frequently experience body contact while jostling for the ball. During a face-off, parts of the players’ bodies often will connect as they compete for possession of the ball. However, certain forms of body contact, such as an illegal body check or pushing from behind the player, may result in penalties even during a face-off. Certain contact that impedes play, such as holding a player’s stick down with one’s hands or stick, also counts as a face-off violation.