The face-off is an essential element of the game of lacrosse that occurs at frequent intervals throughout the game. In a face-off, two members of the opposing teams, usually short-stick midfield players, battle 1-on-1 for possession of the ball close to the ground. Coaches emphasize the importance of winning the face-off; if one team can control the face-offs and earn outright possession or the ensuing loose ball consistently, they are much more likely to win the game. In this tutorial, we will cover the basic procedure of the face-off, review basic face-off techniques, outline face-off violations and distinguish between the face-off procedures in the men’s and women’s game.

A face-off is administered by the official at the start of each quarter and after each goal. The face-off occurs at the face-off X, located in the center of the field on the centerline. One player from each team - almost always a short-stick midfielder - lines up in their defensive half at the centerline. The opposing players kneel or crouch in an athletic stance on the ground, holding a two-handed grip on the shaft to the left of the throat. Prior to the whistle, each stick is parallel to the other with the sidewalls upright and on the ground. Players must not touch the centerline with their stick or any part of the body.

The official sets the ball in the middle of each pocket and blows the whistle to start play. The centers then use stick techniques and body positioning to win possession of the ball. A face-off is considered over when one team gains clear possession or the ball travels out-of-bounds.

During a face-off, a team at full strength must keep three defensemen plus the goalkeeper in the defensive area, three attackmen in the offensive area and one player in each wing area. Once the whistle blows, the players may release and move towards the face-off X to help win a loose ball or get open for the next pass.

The player responsible for taking the face-off must have a fast reaction time, be agile and use physical strength to outmaneuver their opponent. Because face-off play is so critical to the outcome of the game, coaches deploy specialty teams or FOGO players. FOGO stands for “face-off, get off” and indicates a center who immediately exits the field after the face-off ends and the ball transitions to either the defensive or offensive half. Here is a list of different types of grips and stick techniques used during a face-off.

A clamp in lacrosse is the action of quickly trapping the ball with the back of the lacrosse stick during a face off. After a successful clamp, the center can use their body to block their opponent, release the clamp hold on the ball and scoop the ball into their crosse to begin play.

The double over in lacrosse is when a face-off player wraps their hands around the top of the stick at the top of the handle as if riding a motorcycle or bicycle. This tactic allows for more power on the clamp during a face-off.

A plunger in lacrosse is a slang term for a face-off tactic to gain possession of the ball. The center quickly snaps the back of their stick pocket down over the ball and pulls the ball back toward the butt end.

A rake in lacrosse is a way of picking up the ball by running the top of the pocket forward over the top of the ball and then pulling the stick back in to the body. Raking is illegal in women's lacrosse.

There are several illegal actions that can occur during a face-off. A player may not use their hands to handle the ball or hold the opponent’s crosse with their own crosse. Face-off play is intended to be quick, so a player receives a penalty if they hold the ball to the ground under the pocket for too long. Players cannot use their head or helmet to push their opponent away from the ball. Teams are allowed two face-off violations in one half without incurring a time-serving penalty. After the third violation, the in-home player must serve a 30-second technical penalty.

In women’s lacrosse, the equivalent of the face-off is the draw. As in the men’s game, the players hold their sticks parallel with the sidewalls facing up, but they stand upright and the ball is placed in between the opposing players’ pockets. The centers quickly draw their sticks up and overhead to put the ball in play. Similar rules apply to the positioning of other field players around the center circle and behind the restraining line. 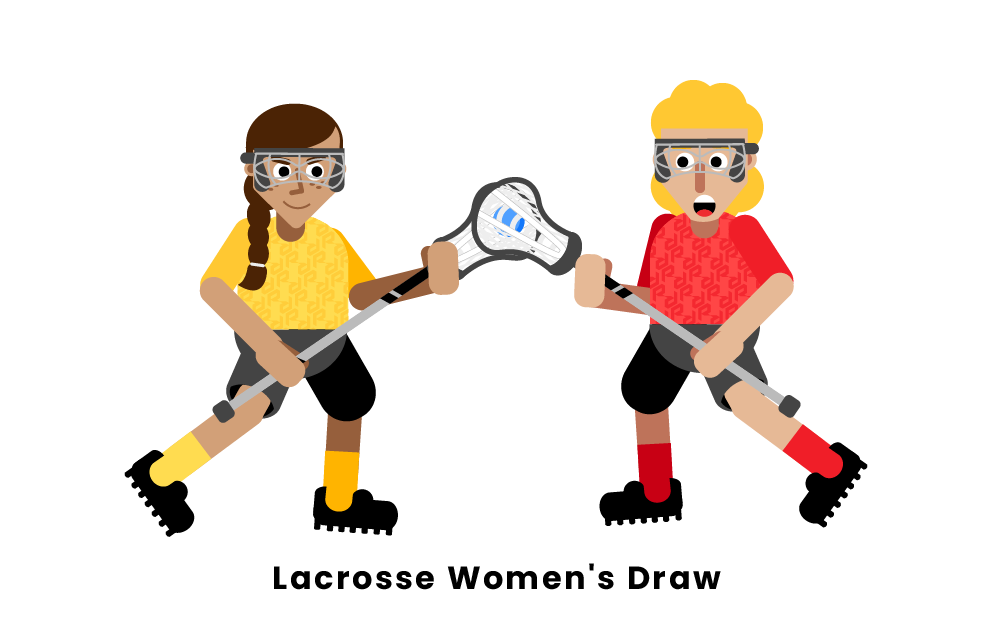