The importance of a strong defense to a lacrosse team's success cannot be overstated. Each team in a lacrosse game will spend some or most of the playing time on defense. When the opposing team is in possession of the ball, all players on the field are collectively considered to be the defense. The main objective of the defense, including the goalie, defenders and defensive midfielders, is to earn shutouts. Defending is both an individual effort and a coordinated team effort that requires clear communication and field vision to anticipate plays and provide help to teammates that may be struggling to contain their assigned attacker.In this article, we will cover the defense types. These are tactics that the coach and defensive coordinator will deploy throughout the game and adjust depending on the flow of play and individual player matchups. This article will explain the differences between man-to-man and zone defense and discuss the nuances of defensive strategies in field lacrosse versus indoor lacrosse.

A man-to-man defense in lacrosse is a defensive strategy where each defenseman covers a single attacker. Individual matchups occur throughout the field, not just in the defensive half. In a settled offensive situation, or even strength situation, there are six attackers and six defenders. Man-to-man defense cannot be used in a man-down defense, such as a six on five scenario. In a man-down situation, teams employ a zone defense, discussed below.

Often in transitions through the midfield, two players on opposing teams find themselves in a one-on-one situation. Therefore, it is important for all players to understand proper footwork, body positioning and checking techniques.Man-to-man defense relies on tight marking and requires strong communication to call for slides and switches. A slide is when an off-ball defender adjacent to the on-ball defender rushes to help cover an attacker who has beaten their defender. The defense should communicate slides so that the second slide or backup slide is ready to help the attacker who is now open. A switch is when a pair of defenders exchange places. A defensive switch is an effective tactic to defend against a pick and roll or screen play. Defenders will communicate this action by verbally calling out "switch."

The zone defense in lacrosse is a strategy used to protect zones of the field instead of man to man marking. If an attacker enters a zone area, the defenseman covering that zone will go mark them. Zones are especially effective in a man down situation. A man-down defense in lacrosse is a defense that is playing with one fewer defender because a teammate is serving a penalty.

There are several common zone tactics in field lacrosse: 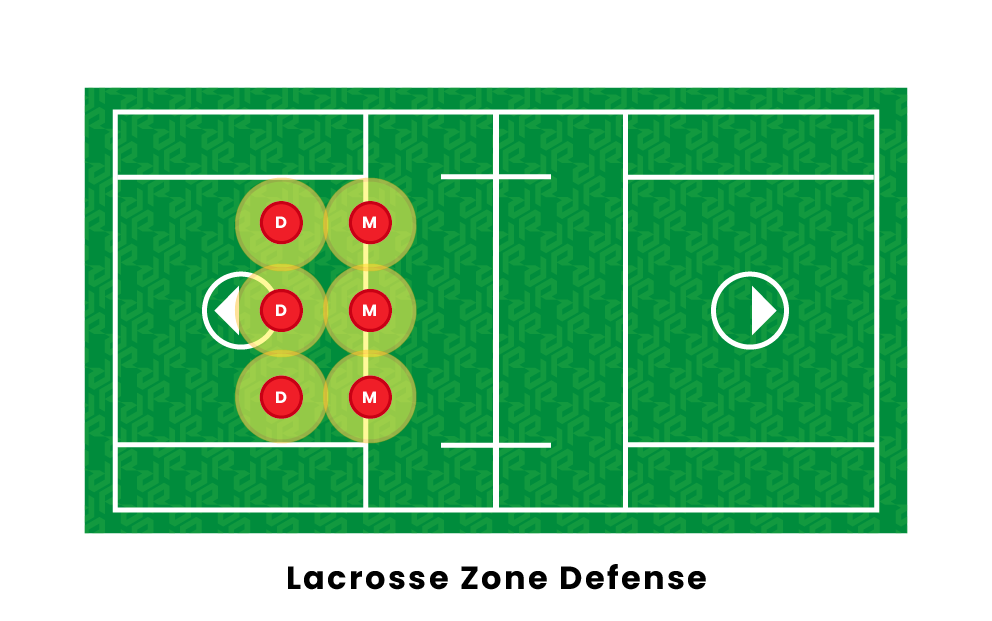 The 2-3 zone in lacrosse is a man-down defensive formation with two defensemen positioned closer to the restraining line and three defensemen covering players closer to the goal. This zone allows the defense to take away plays near the arc close to goal and force the offense to take a low-percentage outside shot.

The slough in lacrosse is a defensive action to drop back from playing the wings and the perimeter and defend closer to the critical goal scoring area. It is a variation on a zone defense.

The box and one in lacrosse is a type of defensive set up often used in a man down scenario. Four defenders form a box-shaped zone close to the goal, while the one extra defender plays man to man against the attacker with the ball. When the offense passes the ball, the formation can shift allowing a player in the four-person box to become the free player.

Because all five players on each team play both defense and offense in indoor lacrosse, zone formations are positioned slightly differently. For example, the diamond man short formation in lacrosse is a defensive strategy used in indoor lacrosse when the defense is in a man down situation. Four defenders make a diamond shape, with three defensemen playing against the cornermen and the pointman, and one defender splitting the two creasemen. The defense requires quick slides and interceptions on passes in to the crease.