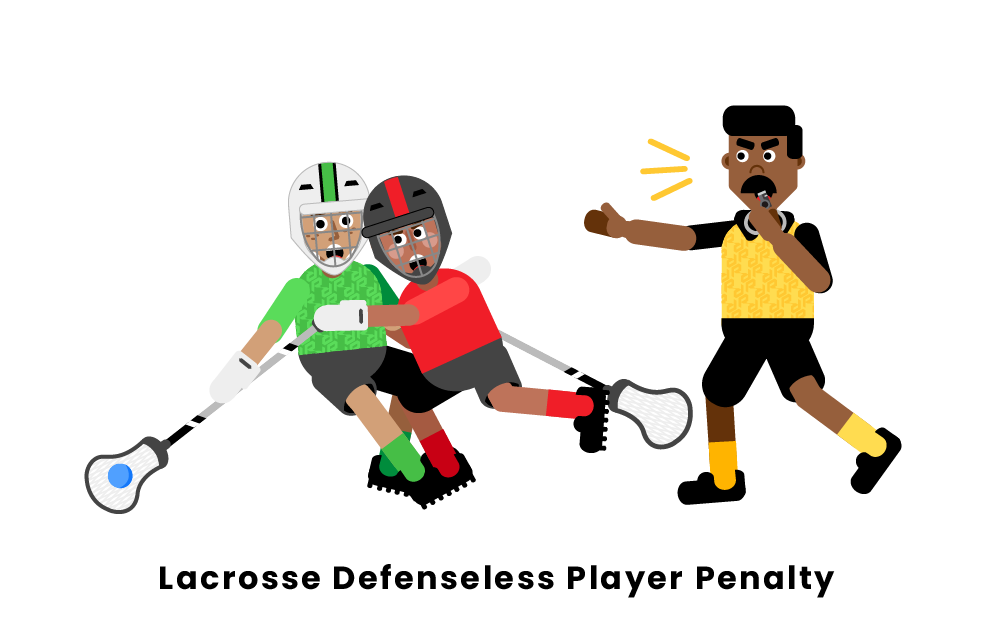 A defenseless player penalty in lacrosse is a personal foul and one that is typically associated with malicious intent. This penalty is called when an illegal body check is performed on an opposing player, such as when opposing players are in the air, facing another direction, or otherwise unable to protect themselves.

In youth and high school lacrosse, NCAA Men's Lacrosse, and many other recognized lacrosse leagues nationwide, hits on a defenseless player are both dangerous and illegal. The defenseless player penalty is categorized as a personal foul, and was created to protect players and discourage malicious checks. It carries anywhere from a one to three-minute penalty sentence, with the potential for ejection from the game in extreme cases. The penalty occurs when a player on the field uses either their body or stick to check an opponent who is defenseless. Typically, this means the player receiving the hit is unable to protect themselves, such as when they are mid-air jumping for a pass or not facing the player hitting them.

The referee makes the call on the field, and they must use their judgment to deem if the offending player had malicious intent. Due to the dangerous nature of hitting a defenseless player, repeat offenders will be subject to expulsion from the remainder of the game. A player might be ejected after their first offense of this nature if the act was deemed violent enough. There is a "zero-tolerance" policy for this type of behavior in youth lacrosse to curb the behavior in young players before the dangerous habit develops.

The penalty for hitting a defenseless player changes based on the league and on-field referee's judgment. In youth lacrosse, the penalty for hitting a defenseless player is more severe than most as there is a zero-tolerance policy that will lead to an immediate ejection. According to the USA Lacrosse Rulebook, the penalty is classified as a personal foul and results in a 1-3 minute penalty box sentence in high school lacrosse. The result remains the same on a collegiate level, with all levels of play allowing for the ejection of repeat offenders. 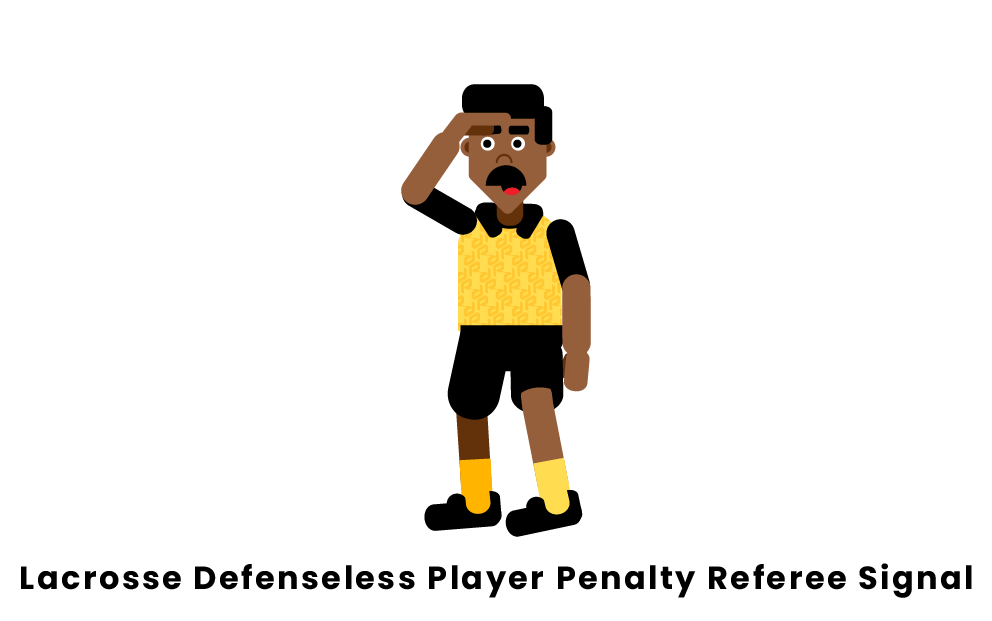 When a referee sees an illegal hit on a defenseless player, he immediately throws a flag to signal the penalty. The referee's hand signal is performed by bringing his hand up to their hat in a "salute-like" manner. The referee then must assess the severity of the offense and determine if the offender had malicious or violent intent in their actions. They then assess either a non-releasable time penalty of one to three minutes or eject the offending player.

What is a defenseless player penalty in lacrosse?

A defenseless player penalty is a personal foul called by the referees on violent hits performed on unprotected opponents. The penalty can warrant ejection if the collision was especially malicious or was not the player's first offense. The rule is similar to unsportsmanlike conduct and covers a combination of illegal cross-checks and body-checks. The penalty was added to increase the protection of the players, discourage malicious checks, and promote safety in the game.

What are the consequences for being called for a defenseless player penalty in lacrosse?

The severity of the penalty for hitting a defenseless player is up to the on-field referee's discretion and varies depending on the level of play. There has been a concentrated effort to remove these hits in youth lacrosse, and there is a zero-tolerance policy that will lead to an immediate ejection for hits on a defenseless player. In all other leagues, including high school, college, and professional lacrosse, the penalty for the action is a one to three-minute non-releasable penalty, depending on the circumstance and evidence of vicious intent.

What makes a player defenseless in lacrosse?

A player is classified as "defenseless" in lacrosse when they cannot protect or brace themselves for a violent impact with an opponent. This includes when a player has any body part besides their feet on the ground and any time a player is mid-air. A player is also considered defenseless if they are looking away from the opponent to receive a pass or go for a ground ball and have their head pointed downwards.