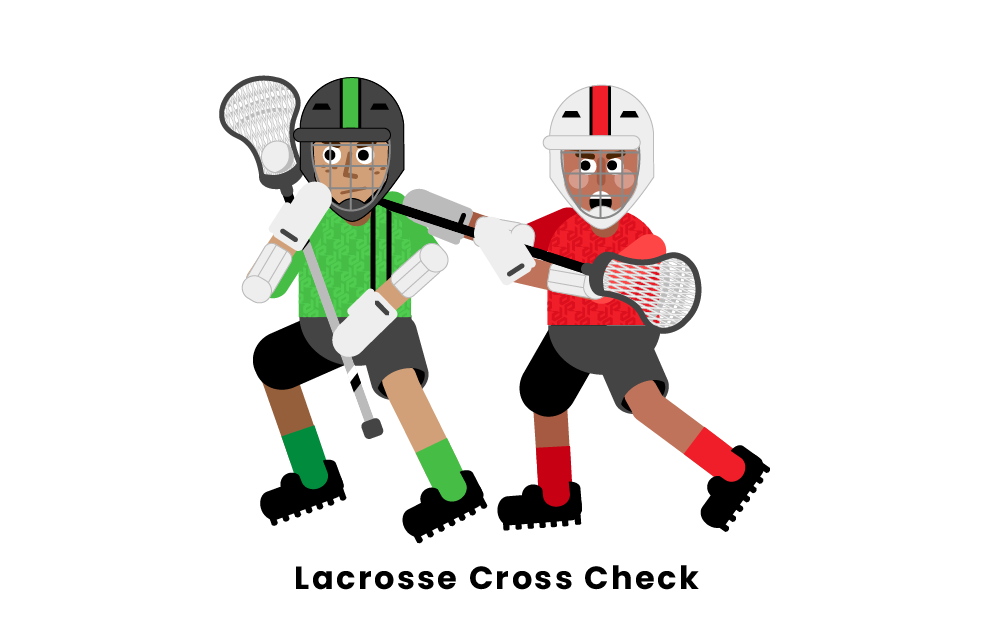 The cross-checking penalty in lacrosse is a personal foul enforced when a referee judges a player's safety is at risk. The foul occurs when an opposing player extends the shaft of their stick into the player running towards them. The call is dependent on the location of impact and the referee's discretion to be called.

The official cross-checking definition varies from league and level of play; according to the official NCAA Men's Lacrosse rules, the foul occurs when a player hits an opposing player with the middle of his shaft and the player's hands are placed wide apart on the stick. Conversely, the NFHS and Youth Lacrosse rules define the penalty as a player performing a check by using the middle of their shaft to thrust or extend away from their body, using in the area between their hands to hit their opponent.

Regardless of league, the act of extending the cross-section of the shaft into the opponent is a typical dead giveaway to referees to make the call. The penalty is dependent on the referee witnessing the rule being broken firsthand. If the foul is observed, the referee will throw a flag and assess a personal foul to the offending player. This call can result in a one to three-minute penalty for the player who performed the illegal cross-check and even ejection from the remainder of the game, depending on the severity of the offense.

The result for a cross-checking penalty varies by league but is typically counted as a personal foul on the offending player. In men's high school lacrosse, the foul generally comes with a 1-3 minutes period in the penalty box. The NCAA is stricter with its enforcement and can even lead to ejection and suspension from games. The only formally recognized lacrosse league to allow any form of cross-checking is box lacrosse. 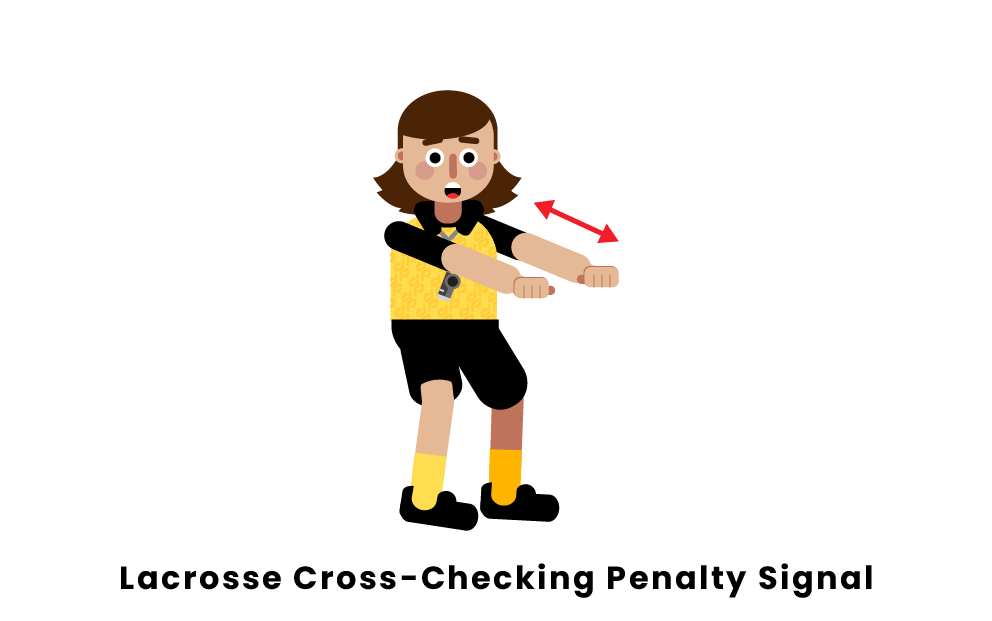 When the referee witnesses a cross-check being performed by a player, they throw a penalty flag and wait for a loose ball or change of possession to stop play. They then signal the penalty by pushing both of their arms straight in and out in a pushing manner with closed fists to imitate the cross-checking motion. The referee will assess the personal foul on the player being penalized and announce the penalty time they must serve, based on the level of the transgression.

What is cross-checking in lacrosse?

Cross-checking is the act of extending the cross-section of the shaft into an opponent to impede their movement, making contact with your hands spread apart. This penalty is called when the stick is not being used properly by a player and could potentially lead to danger or injury for other opposing players. What does and does not constitute cross-checking is ultimately up to the referee's discretion and will be called differently at various levels of play.

What are the consequences of being called for cross-checking in lacrosse?

The consequence for a cross-checking penalty varies by league and level of play. In most recognized leagues, the action is classified as a personal foul and comes with a time penalty between 1-3 minutes for the player who performed the cross-check. Some leagues may even eject the player if the action is violent and dangerous enough; this is dictated by the referee’s judgment.

Are you allowed to body check in lacrosse?

Body-checking may be similar to cross-checking, but it is not the same. Body-checking is defined as a player using their body to try and take the ball away from an opponent during play. Like cross-checking, it can be considered a foul if performed in a dangerous manner; this is left to the referee's judgment can be slightly ambiguous. Both rules focus on the point of contact, but body-checking is concentrated in shoulder-to-shoulder contact instead of the location of contact the stick makes with the opponent, as seen in cross-checking.