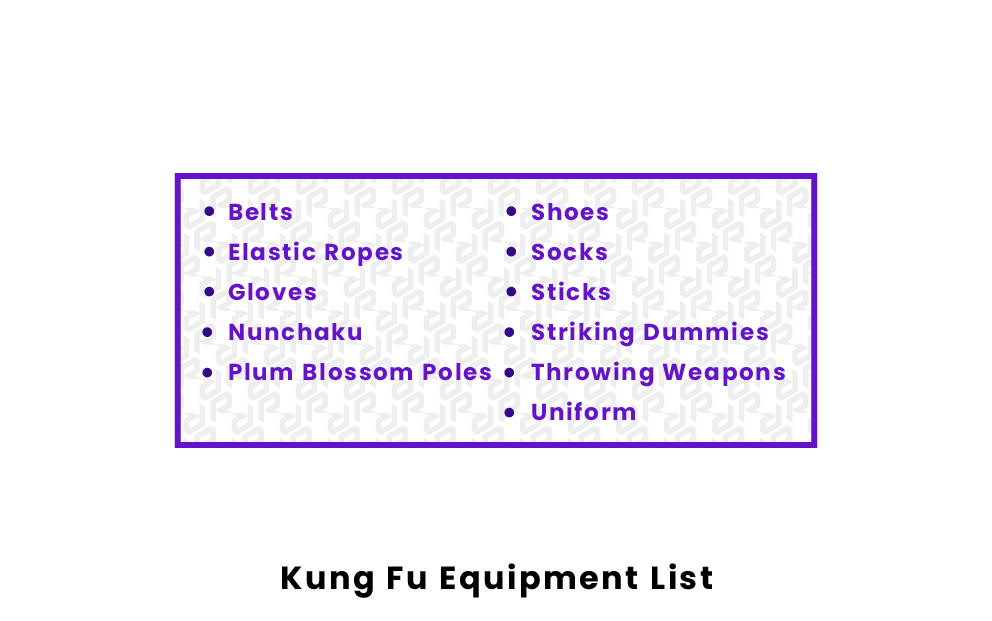 Kung fu is a form of martial arts that uses a variety of equipment for training and fighting. Although much of the equipment is not absolutely necessary to practice kung fu, it is useful in studying different fighting techniques and learning important skills.

Since kung fu is a contact sport and is very physically demanding, protective equipment such as gloves are often used. In addition, kung fu fighters wear uniforms when training that can include specialized shirts, pants, belts, and shoes. To improve upon skills and techniques, there are a variety of training tools used by fighters, such as plum blossom poles and striking dummies, along with weapons such as nunchaku, sticks, elastic ropes, and throwing weapons. 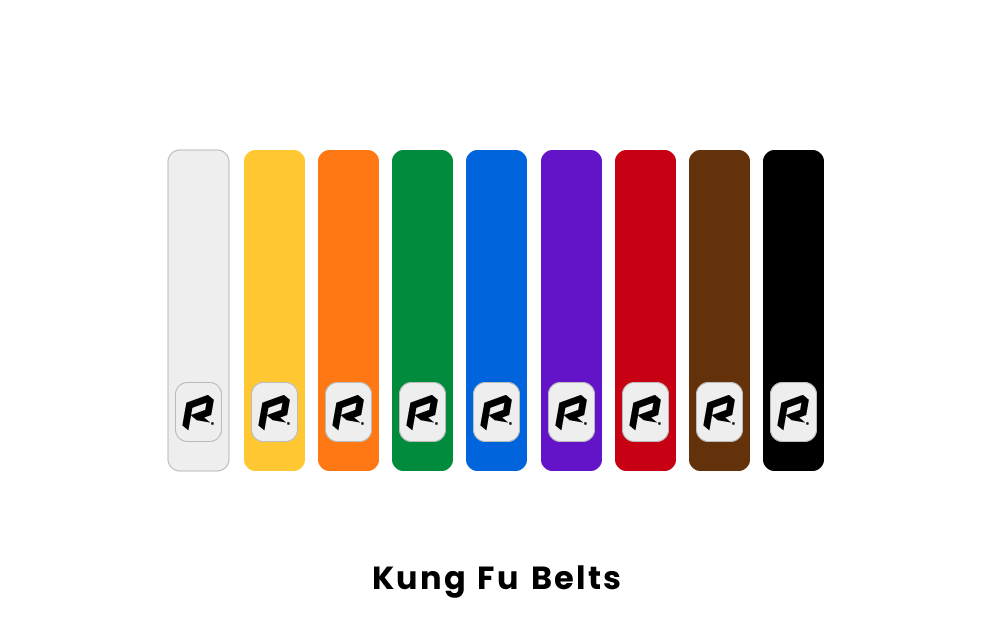 Although not traditionally used in kung fu, a belt system is now used to signal the rank of a kung fu student. Unlike other martial arts, kung fu belts are more like sashes than belts and are often made out of silk. As a student works towards mastery, they are awarded different colored belts that each represent a different level.

In the beginner stages of kung fu, students start with a white belt and progress to a yellow belt and then a green one as they improve upon the fundamental skills of the art. Once they have learned the fundamentals, students move into the intermediate stage of kung fu, where they learn more complex techniques and use weapons. In this stage, students earn a blue belt followed by a purple belt. Following the intermediate level is the advanced level, where students use higher-level weapons and practice sparring with opponents. Throughout this stage, students move up through several degrees of brown belts. The final stage is the black belt, which is awarded to students who have mastered the art of kung fu. 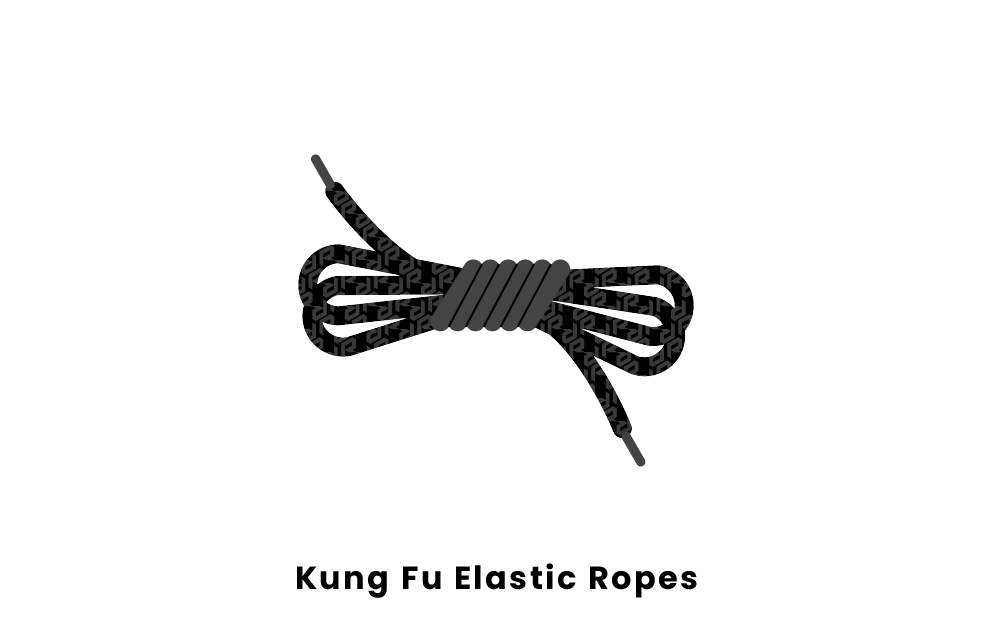 Elastic ropes can serve many functions when practicing kung fu and can help improve crucial skills like timing and precision. One primary function of the ropes is to support hanging speedballs. Students can punch, kick, and dodge the speedball to practice and improve upon their coordination, timing, and balance. Another function of elastic ropes is to introduce students to the use of flexible weapons. By practicing combat with the ropes, they will prepare to use upper-level weapons such as the kusarigama, a Japanese weapon consisting of a sickle with a chain and weight attached. 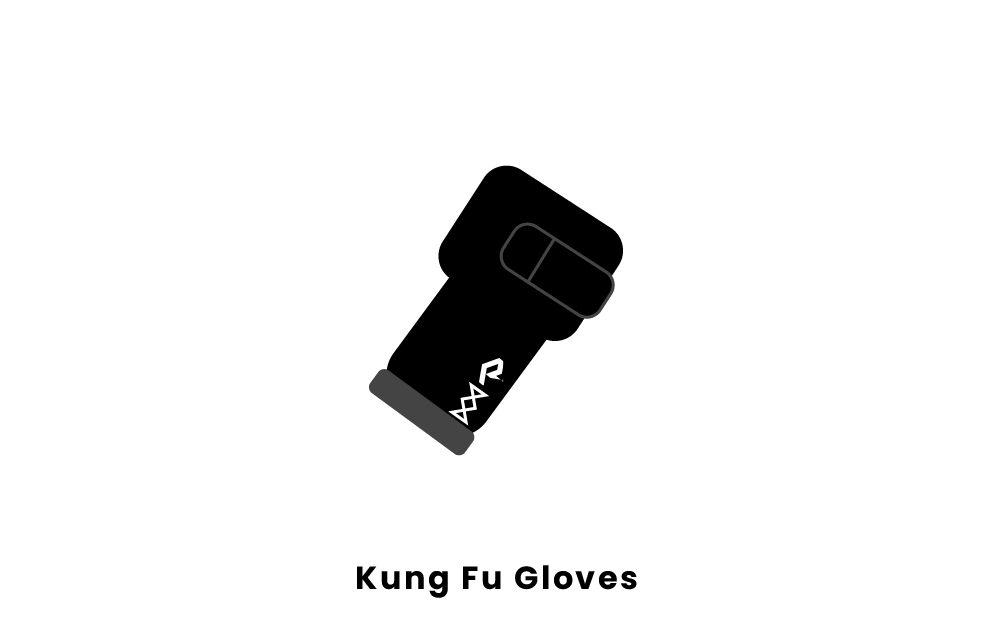 Another useful piece of equipment when practicing kung fu is a pair of gloves. Gloves are often padded and can be worn to protect knuckles and wrists when fighting. They can also help prevent the development of calluses from repeatedly gripping weapons. However, students may prefer not to wear gloves so that they can develop a natural grip on the weapons and can eventually spar with nothing covering their hands. 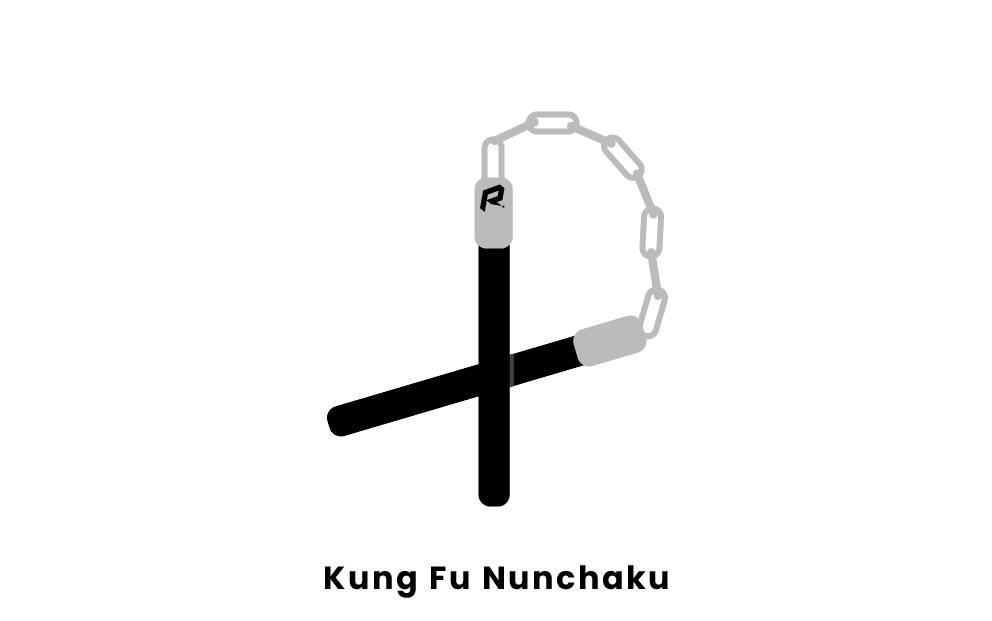 The nunchaku (or "nunchucks") is a commonly used weapon in martial arts that involves two sticks connected by a chain or cord. This weapon is often used to prepare students for the use of other flexible weapons, along with some rigid weapons. It also teaches students how to move fluently and develop rapid hand movements. 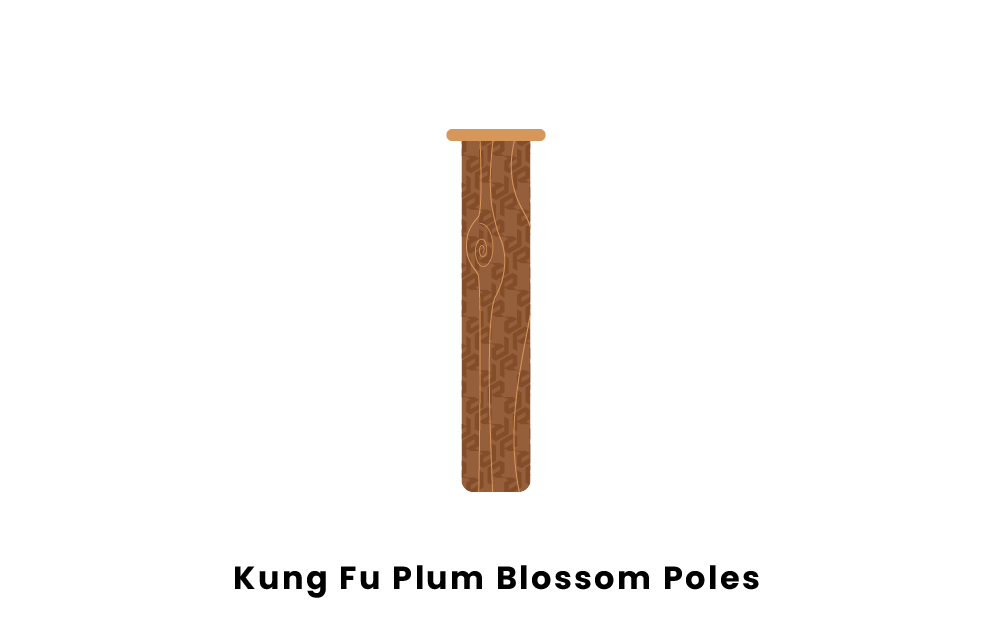 Plum blossom poles are a traditional training technology widely used in China that helps students practice balance and focus their attention on stepping and turning. These poles are usually around 4 to 5.5 inches wide and are planted into the ground. The height, pattern, and number of poles used can vary depending on the location and school. In addition, some schools set all of the poles at the same height while others may set the poles at varying heights. 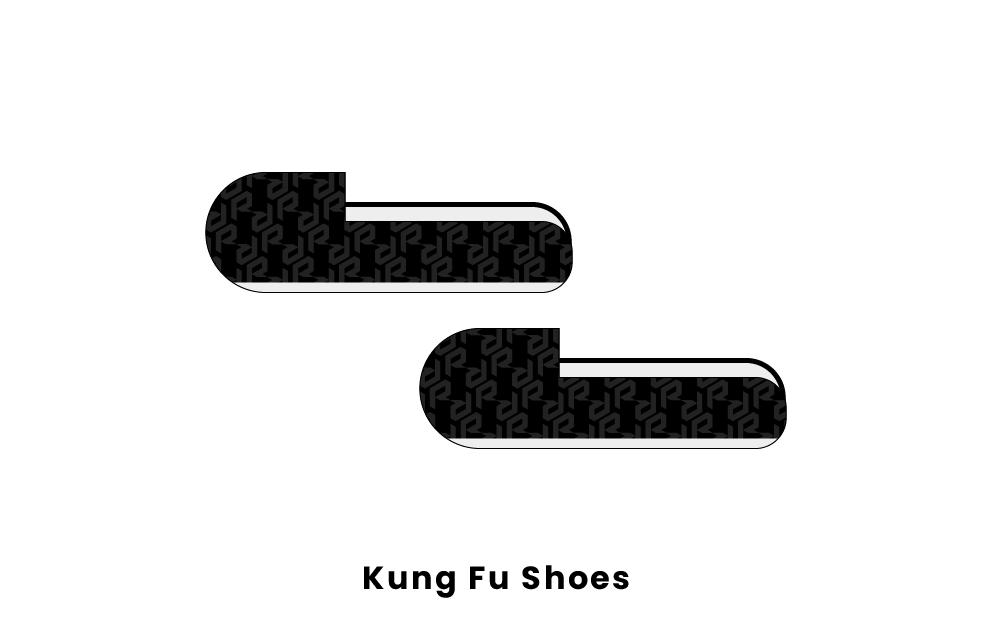 When practicing kung fu, traditional martial arts slippers are often worn. The slippers tend to be low cut and made out of a canvas material. They are light-weight and do not have much grip, allowing the fighter to rotate and shift directions smoothly. Although footwear can be worn when training, many prefer to practice and fight barefoot. 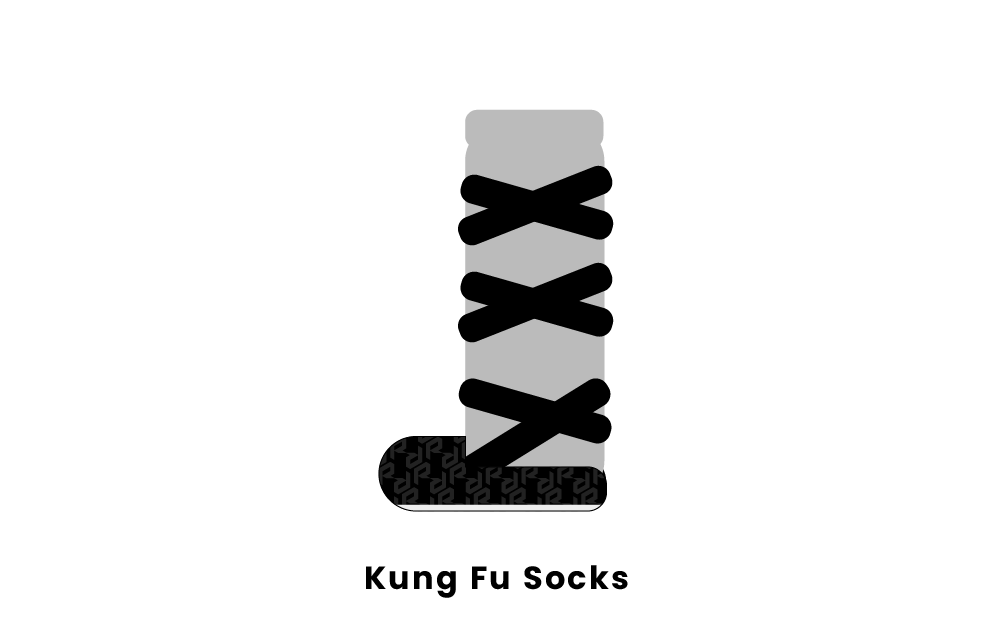 In addition to shoes, kung fu students may also wear special socks that were traditionally worn by Shaolin monks. The socks are worn to go over the bottom of the pants and are often the same color as the pants. They are wrapped in a traditional fashion and can help protect the ankles of the fighter. 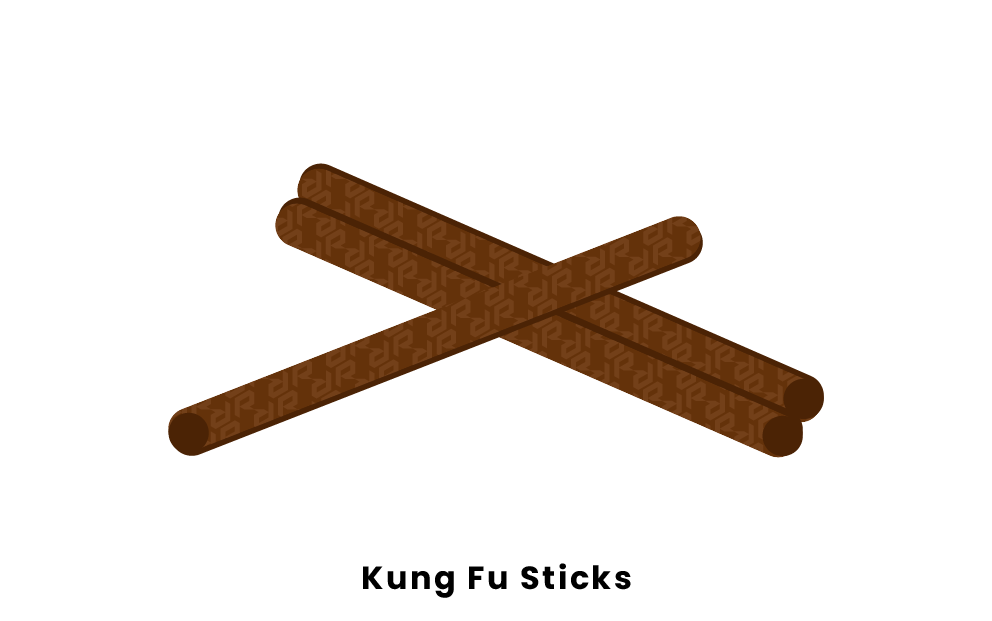 There are several types of sticks that can be used in kung fu. One of the most commonly used is the long stick. Long sticks are often used as weapons in kung fu because they can greatly increase the reach of the fighter. They also help improve the spatial awareness of the user and can be used for other actions, like stretching. Shorter sticks can also be used as weapons, as they imitate small knives or contact weapons like brass knuckles. In addition, fighters may also use two short sticks at once. This can help them prepare to use advanced weapons like nunchucks and can improve coordination and multitasking skills. Lastly, medium-sized sticks can be used in kung fu as weapons and can be used in the place of similarly sized weapons, such as swords. 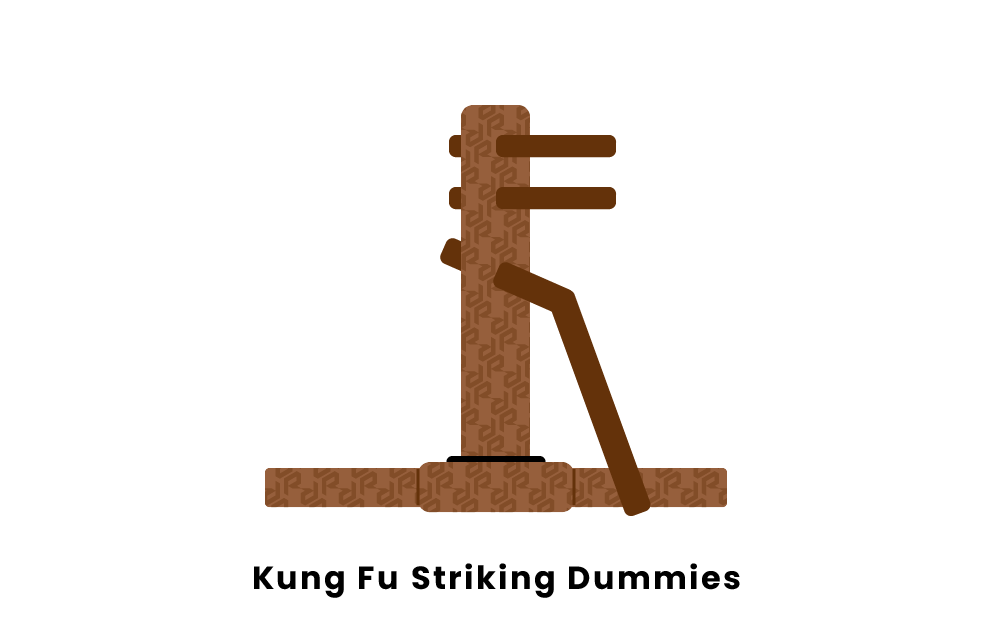 Striking dummies are one of the most popular pieces of equipment used when practicing kung fu. There are many forms of striking dummies used in different countries and at different schools. The most simple form is a single pole that is planted into the ground and struck by students. Another fairly simple model is a pole that has four rods sticking out near the top in the shape of a cross. Similar to the singular pole, this type of striking dummy provides a relatively easy target for fighters to strike openly. On the other hand, striking dummies can be more complex, with several arms and legs along the pole. The dummies may also contain moving parts such as levers and arms that are weighted or fastened to the pole with springs. These dummies are generally more realistic and are more useful for students.

The most well-known type of striking dummy today is the "Wing Chun" style dummy. The design of the dummy was created by Fung Shek and made famous by Ip Man, a legendary Wing Chun instructor. Since Ip Man lived in an apartment building and could not use a standard planted dummy, Fung made the dummy more portable and able to be mounted on the wall. The dummy is commonly made of wood and contains thin wooden strips that allow for more movement of the arms when the dummy is struck. 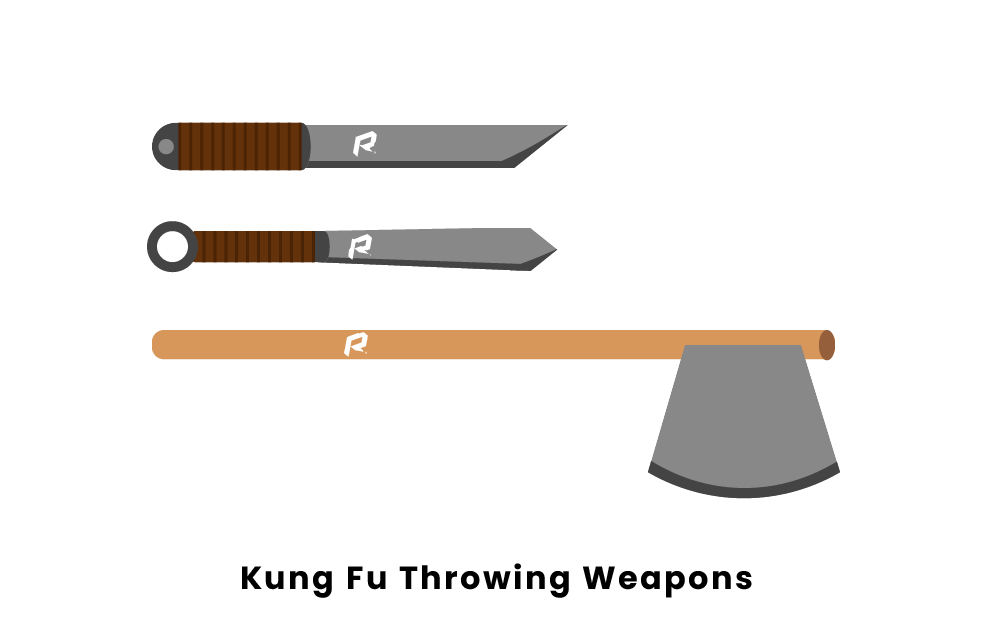 There are a variety of throwing weapons used in kung fu, including knives, darts, axes, and rocks. When training, chopsticks can be used as a safe substitute for these dangerous throwing weapons. For round objects that can be dangerous, tennis balls are often used when training. Tennis balls are a versatile tool and can be utilized for many different exercises when practicing kung fu. 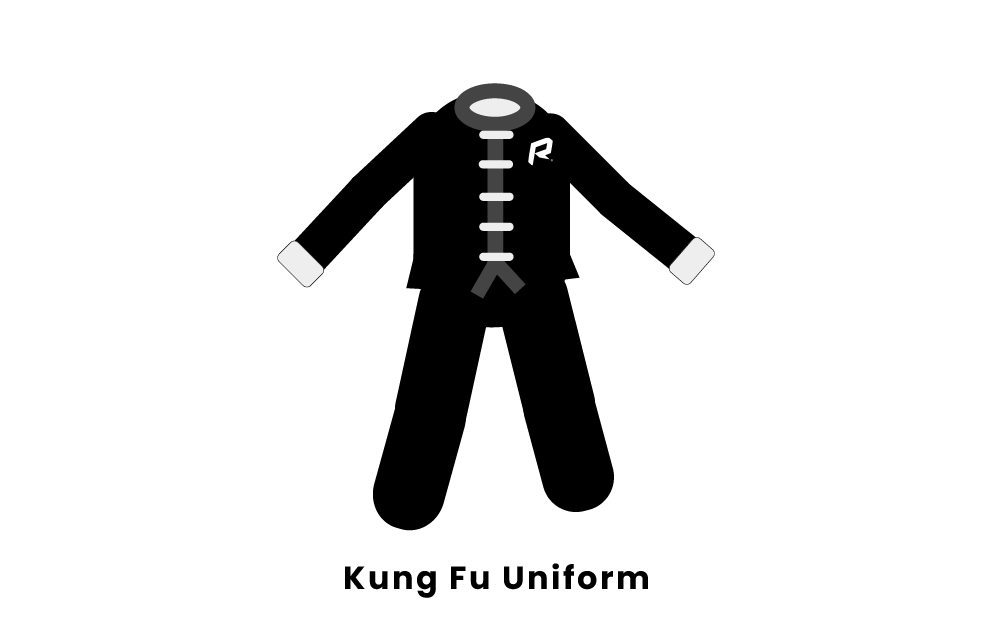 When practicing kung fu, many students wear specialized uniforms that differ from uniforms worn for other martial arts like karate or taekwondo. The uniforms consist of a long sleeved top and long pants. The uniform tops have frog-button style closures that are used in place of traditional buttons to fasten the top together. Both the top and pants are often made up of a polyester blend that allows the fighter to kick, bend, and punch freely, as the fabric will not stick to the skin. Aside from the formal uniform, many students also practice kung fu in a simple black t-shirt.