How Long Is A Kickball Game? 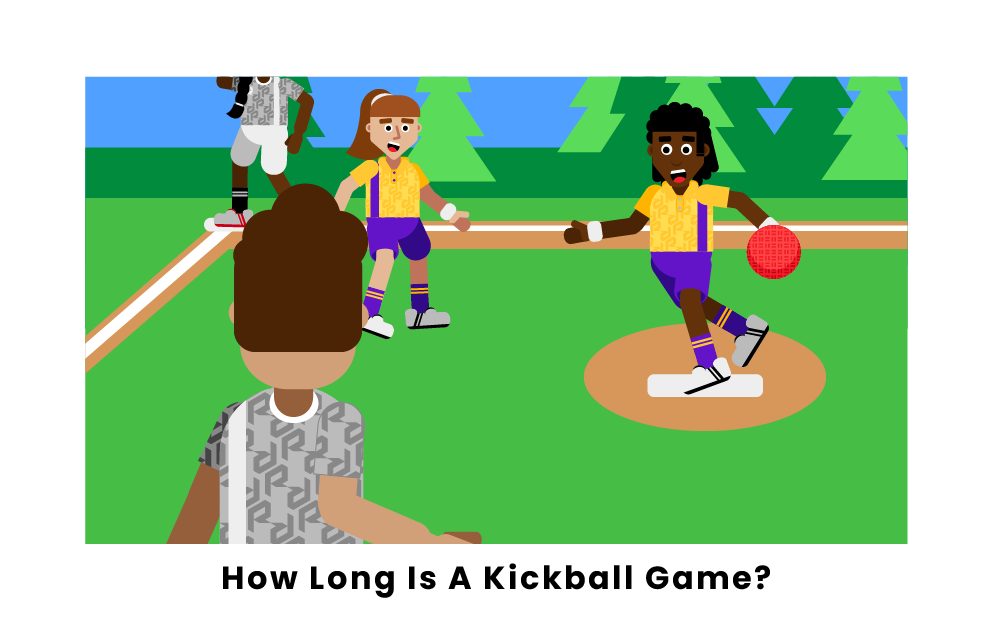 Kickball is a fun game that combines elements of soccer with softball and baseball and is a simple game that can provide entertainment for all ages. Many young adults in America and worldwide have fond memories of playing kickball in school, but how long is a regulation kickball game? The sport itself has a relatively short history, as it was invented in the United States early in the 20th Century, but it currently serves to help teach young children the rules of baseball and provides a fun outdoor or indoor activity.

In its basic form, kickball is a combination of soccer and baseball. It is played with a large rubber ball on a surface identical to a baseball or softball diamond, though the field can vary in size. The object of the game, like baseball, is to score points by kicking the ball and circling the bases, with a point scored each time a player on the kicking team rounds the bases and returns to home plate. Meanwhile, the opposing team must try to prevent as many runs by the kicking team as possible and does so by getting kicking players out. In general, kickball can be played by any group of people, but most kickball games consist of two teams with five to 15 players each. The World Adult Kickball Association (WAKA) rules recommend that teams number between eight and 11 players each.

Like baseball and softball, kickball is structured such that the game is separated into sections called “innings.”  There are two halves to each inning: in the first half of an inning, one team has the opportunity to kick the ball and score runs, while in the second half of an inning, the other team gets a chance to kick. The halves of an inning have no set length, and a team can often score as many runs as possible in an inning before they switch. However, some kickball leagues do limit the number of runs a team can score per inning in order to save time, such as by allowing a maximum of ten runs to be scored per inning. Many leagues also have a “mercy rule,” which states that the game will end if one team is ahead by a wide margin (usually ten or 15 runs) after a certain number of innings.

The easiest way to end one half of an inning is for the kicking team to earn three outs. Whenever a player kicks the ball, only for it to be caught by a player on the opposing team, that player is out and must leave the bases. Another way to get a player out in kickball is for a member of the non-kicking team to tag an opponent with the ball before they reach the base they are running to. A final method of getting an out is if a player is forced out at a base, such as by the baseman receiving the ball and standing on the base prior to the kicker reaching it. Some leagues also permit missed kicks (or “strikes”) to count towards an out, similarly to baseball, with certain leagues allowing an out to be awarded after two or three strikes. Once a team gets three outs, their half of the inning ends.

According to the WAKA Rules, standard kickball games consist of six innings, meaning that each team will get six attempts to score runs in each game. In a kickball game where there are no limits on runs or other time restrictions, this can make it hard to judge how long a game will take. Like baseball, a kickball game with no restrictions on time could potentially last many hours or even days, which is why (as we will see below) many kickball leagues elect to impose certain time limits upon kickball games.

Due to kickball games having the potential to last a long time, certain leagues across America and the world impose time limits upon kickball games in order to keep them brief. For example, many kickball leagues impose a maximum time limit on games that can amount to 45, 50, 55, or 60 minutes, meaning that a game cannot exceed that length of time. However, in most leagues, innings that are still in progress can be finished even if they exceed the maximum time limit, but no new innings are allowed to begin after the time limit expires.

How many innings are in a kickball game?

According to the rules of the World Adult Kickball Association (WAKA), a standard game of kickball consists of six innings, in which each team has a chance to score runs. Innings are divided into two halves, with one half allowing one team to score runs and the other half allowing the other team to do so. Innings can be ended if the kicking team gets three outs but can also be ended in some leagues if the maximum time limit expires or if the kicking team scores a maximum number of runs allowed per inning. Some kickball leagues alter the number of innings per game, allowing for five or seven innings.

How long is an inning in kickball?

There is no set time for an inning in kickball, as the end of an inning is determined by how long it takes each team to get three outs. Theoretically, if there were no time limits on a kickball game, and if one team continued to score runs without gaining any outs, an inning in kickball could last hours. For this reason, many kickball leagues require that games end after a set amount of time, such as an hour, or fix a limit to the number of runs one team can score per inning, forcing the inning to end after that number is reached.

Is there a time limit in kickball?

Some kickball leagues do impose time limits upon their games in order to keep the games brief and prevent them from running longer than necessary. Many kickball leagues impose overall time limits, requiring that a game in-progress must end after a certain time has elapsed. This time limit can range from 45 minutes to an hour. Some kickball leagues allow games to run overtime if an inning is in progress when time elapses, permitting that inning to be finished. Other leagues require that a new inning must begin 10-15 minutes prior to the end of maximum time in order to give each team a final chance to score.

Pages Related to How Long Is A Kickball Game?