What Are The Rules of The Kentucky Derby? 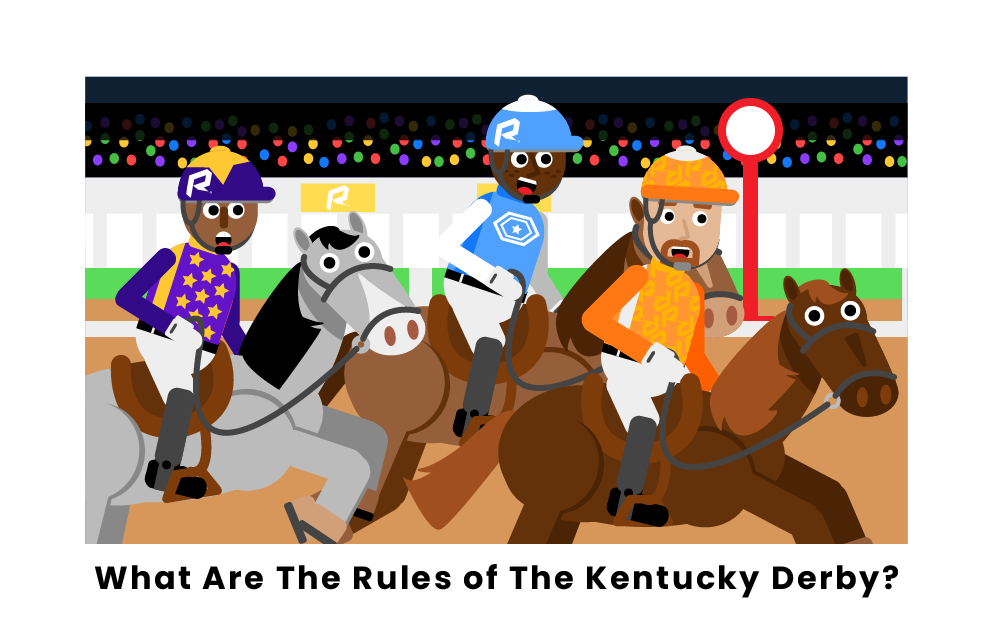 The objective of horse racing is to complete the race before any of the other horses. The horses run around an oval race track with a jockey on their back that needs to control the speed and composure of the horse. One controversial implement in horse racing is the whip stick, which is used to whip the horse as it runs around the track. This typically increases the horse’s speed, but the whip stick is banned in several countries due to perceived violations of animal rights. Despite this, the whip stick is allowed in United States horse racing and, subsequently, in the Kentucky Derby.

Each horse race begins at the starter stall, where each horse runs out after the starting gun is fired. If a horse runs out of the starting gate before the starting pistol has been shot, a false start is declared. As with any other race, the race ends at the finish line, and the first horse to cross that line is declared the winner. It is also illegal to push, shove, or otherwise interfere with another horse or jockey during the race, and the horse and jockey will be disqualified if this occurs.

Horse racing is also a sport with heavy gambling ties. On account of this, there are rules in place to ensure competitive integrity so that no one unfairly loses money due to a jockey not putting in full effort to win a race. If the race steward feels that a jockey intentionally lost a horse race or did not commit full effort to win a race, there can be severe sanctions and suspensions for the horse and jockey, depending on the situation.

Qualifying for the Kentucky Derby

The Kentucky Derby and other Triple Crown races are unique in that each horse in the derby must be exactly three years old. The age limitation creates a competitive environment because every horse is the same age and theoretically has the same physical capabilities. Due to this, the Kentucky Derby is truly a once-in-a-lifetime event for each horse, and qualification into the race is considered a prestigious honor. In order to qualify for the Kentucky Derby, a horse must compete in a number of preparation races, and points are allotted through these races. In each of the prep races, the top four finishers gain points towards qualification for the Kentucky Derby. The number of points allotted varies from race to race, with top finishers in races shortly before the actual Kentucky Derby earning more points than earlier in the circuit. For example, the last prep race before the Kentucky Derby is the Lexington Stakes. The winner of this race is awarded 20 points toward qualification, with second place being awarded eight points. Horses must have 40 points accumulated via these prep races in order to qualify.

While most of these horses qualify from prep races within the United States, there are also prep races in Japan, the United Arab Emirates, Ireland, and the United Kingdom, and any horse that accumulates 40 points from prep races in any of these countries earns a bid into the Kentucky Derby. The Kentucky Derby is also quite costly for any horse that qualifies. Along with any traveling and other costs associated with attending the event, the owner of each horse must pay an entrance and starting fee. For each horse, the entrance and starting fee is $25,000 each, totaling $50,000, as well as a nomination fee that is either $600 or $6,000, depending on how early they qualify for the derby. These fees can be well worth the costs, though, as the winner of the Kentucky Derby earns a $2 million prize.

Pages Related to What Are The Rules of The Kentucky Derby?