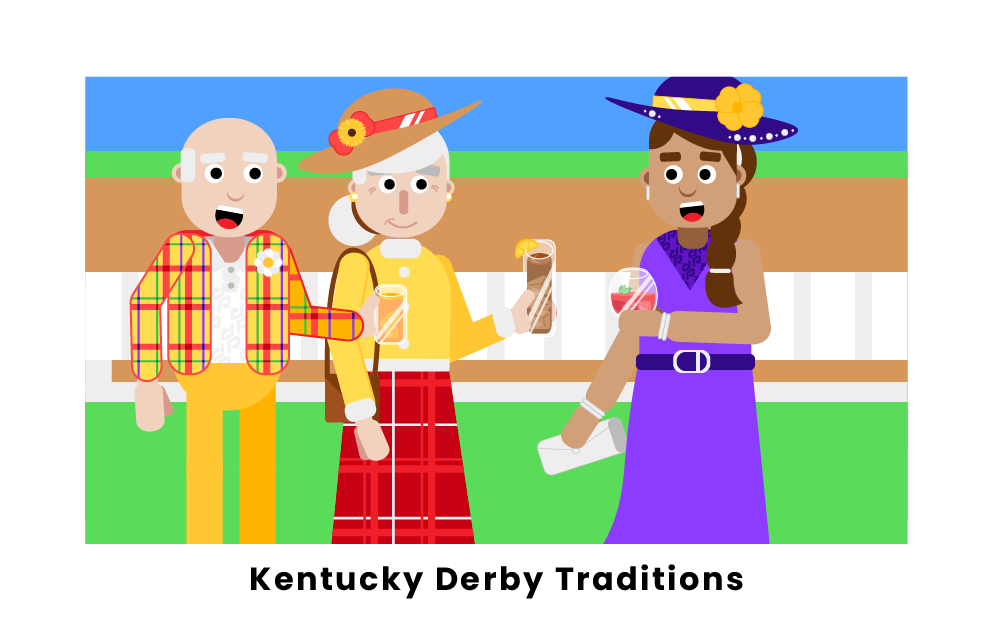 The Kentucky Derby in itself is a long-standing American tradition that has continued annually since 1875. It is held on the first Saturday of May at the Churchill Downs racetrack in Louisville, Kentucky. Due to the derby being an iconic piece of American culture, tons of traditions take place leading up to and during the race. Here is a compilation of some of the best and most notable Kentucky Derby traditions.

What are the most important Kentucky Derby traditions?

One of the most well-known traditions of the Kentucky Derby is the large, ornate hats worn by the women attending the event. Fashion has always been an important component of the derby, and both men and women sport nice suits and fancy dresses.

The tradition of wearing ornate hats to the race has been around as long as the race itself. The hats were attributed to good luck, so the bigger the hat, the more good luck you had. Women use their hats as an opportunity to convey their style and personalities, and these hats stand out among the large crowds.

A common nickname for the Kentucky Derby is the “Run for the Roses,” and this is because of the Garland of Roses tradition. The garland is made of more than 400 roses sewn into green satin. After the race, the garland is draped over the winning horse.

The tradition began in 1896 when the winning jockey of the race, Ben Brush, received an assortment of white and pink roses. After that, winners began receiving roses, and the red rose became the official flower of the Kentucky Derby in 1904. The first Garland of Roses that resembles the one we see today was made and used in 1932.

It is tradition to drink the cocktail from the special julep glasses at the race. The glasses have the name of every Kentucky Derby winner printed on them, and people are encouraged to take their glass home with them afterward as a souvenir.

Betting is an exciting part of the Kentucky Derby that almost every spectator at the event participates in, and even those who don’t attend the derby themselves enjoy putting money on their favorite horses. Over $150 million is won by bettors every year. Crowded kiosks where attendees can wager their bets are everywhere at the event, and the betting has been around since the first race in 1875. Even if it is only a couple of quarters, everyone is encouraged to try their chance to win some money.

The mint julep tradition is taken one step further for the jockey who wins the Kentucky Derby. After winning the race, the jockey is invited to the president of Churchill Down’s room, where there are mint julep cups made of sterling silver.

It is tradition for the governor of Kentucky to toast the winner with these special glasses in celebration of their victory. This way, even the jockeys get to enjoy the derby’s official drink.

This tradition dates back to 1921 and is a source of great pride among Kentuckians. The song, My Old Kentucky Home by Stephen Foster is played almost every year at the derby. The University of Louisville marching band performs this song as the horses make their way to the starting gate. This is one of the most moving aspects of the race because as they play, tens of thousands of people in the crowd sing along in celebration.

Although the Kentucky Derby may be seen as a classy event, the infield parties are a longstanding tradition that can be rather rowdy. The infield is the long stretch of field inside the racetrack, and crowds of people flock there to create one huge party.

The Derby Party is the most affordable place to attend the race, and day drinking begins as early as 8 AM. It is unclear when the parties became an integral part of the Kentucky Derby, as they have grown and evolved as the derby has grown in popularity.

Millionaire’s Row is where many of the celebrities and extremely wealthy watch the Kentucky Derby from. The dining area overlooks the racetrack, and it was introduced in 1966 to accommodate the wealthy people looking to escape the craziness and partying happening throughout the infield.

With tickets costing over $1,000, spectators look forward to seeing which celebrities have traveled all the way to the Churchill Downs racetrack to see the Kentucky Derby.

This tradition started back in 1963 and takes place along the Ohio River. People purchase tickets to watch three boats race down the river. The event lasts about two hours, and the winner is awarded a pair of silver antlers.

A longstanding tradition of the Kentucky Derby is to present the winner with a special gold trophy. It is unclear if trophies have been given out in years prior, but 1924 was the year when the standard Kentucky Derby Trophy design was commissioned by the Churchill Downs president, Matt Winn.

Since 1975, the trophy has been made in North Attleboro, MA. The trophy is 22 inches tall and weighs 56 ounces. It is topped by an 18-karat gold horse and rider and has horseshoe-shaped handles.