History Of The Kentucky Derby 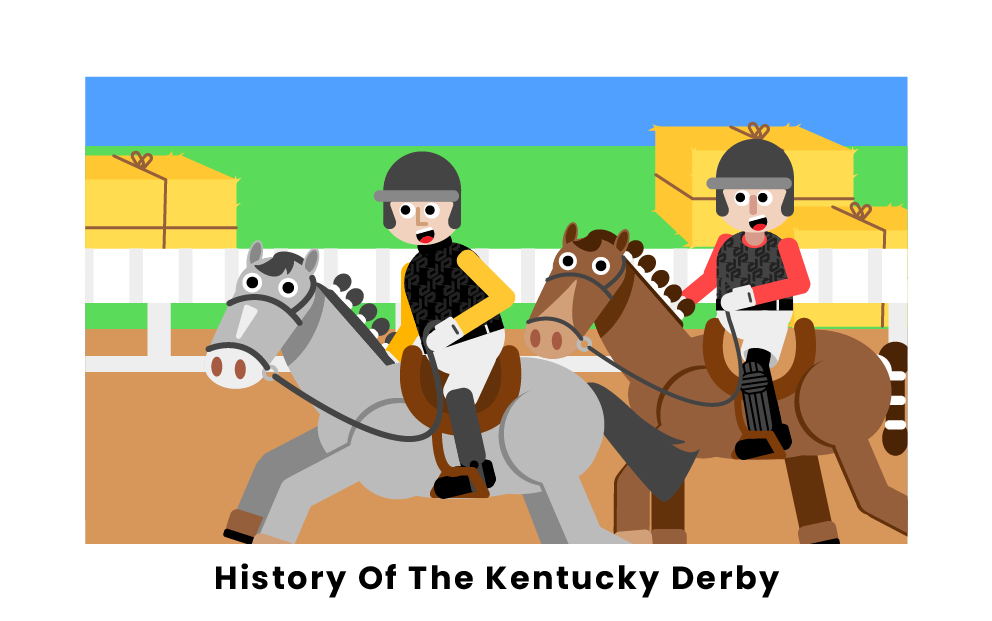 It is doubtful that there is a more famous event in the history of Thoroughbred horse racing than the annual Kentucky Derby. Since 1875, horses from across America have competed in this difficult and exciting race at Churchill Downs in Louisville, Kentucky, often with aspirations of winning the elusive Triple Crown, the most coveted title in horse racing. Here, we take a look at the history of the Kentucky Derby, where it started, famous winners of the race, and the impact it has had on American culture.

The history of the Kentucky Derby began in Louisville, a city known for its horse racing long before the state of Kentucky was accepted into the United States of America in 1792. However, the race's beginnings can be traced to Meriwether Lewis Clark, Jr., an American colonel who was the grandson of famed American explorer William Clark of the Lewis and Clark Expedition. During his own travels to Europe, Clark Jr. met and befriended a number of prominent figures in the horse racing business, meetings which inspired him to set up a jockey club in Louisville. To do so, Clark built a racing track on land owned by his uncles, John and Henry Churchill, which he later named “Churchill Downs” in their honor. The racetrack opened in 1875, and that same year, the first-ever Kentucky Derby was held on May 17th, being won by a horse named Aristides. In 1895, the track’s famous, twin-spired grandstand was completed. In the modern day, the Kentucky Derby is traditionally held annually, usually on the first Saturday in May.

Since its inauguration in 1875, the Kentucky Derby has been the site of many historical events and cultural moments. It and other horse races were notable in the late 1800s for being one of the few sports where athletes of color were prominently featured. For example, in the first Kentucky Derby, 13 of the 15 jockeys competing were black, including the winner, Oliver Lewis, who rode Aristides. Isaac Burns Murphy, the son of a black Union soldier, was the first jockey to win the Kentucky Derby three times, capturing the race in 1884, 1890, and 1891. The Derby has also been known for including many winning horses owned by women, including Penny Chenery, the owner of Secretariat, who won both the Kentucky Derby and the Triple Crown in 1973 and still holds the all-time speed record in the race.

In addition to its long history, the Kentucky Derby has spawned a number of unique cultural practices that are hallmarks of its annual running. Each year, the week before the Derby sees various festivals, galas, and parties for jockeys, owners, and fans alike, and the day of the race itself is known for its many traditions. One of these traditions is drinking mint juleps, which are iced cocktails made from bourbon, mint, and sugar. Women who attend the Kentucky Derby are known for wearing elaborate hats, often with wide brims, feathers, and even jewelry. Another notable tradition at the race involves the winning horse being draped with a blanket of red roses, which led to the coining of the Derby’s popular nickname, the “Run for the Roses,” in 1925. A final tradition well-known to Derby fans is the singing of Stephen Foster’s song “My Old Kentucky Home” while the horses are being led to the starting gate, a tradition that dates back to the 1930s.

What is the history of the Kentucky Derby?

The Kentucky Derby began in Louisville, Kentucky in 1875, with the opening of the Churchill Downs racecourse by Meriwether Lewis Clark, Jr. The first-ever Kentucky Derby was won by Aristides, who was ridden by jockey Oliver Lewis. Since then, the race has been held annually at Churchill Downs, usually occurring on the first Saturday in May. The race is also the first leg of the American Triple Crown and is followed by the Preakness Stakes and the Belmont Stakes.

Who invented the Kentucky Derby?

The Kentucky Derby was invented by Meriwether Lewis Clark, Jr., the son of Meriwether Lewis Clark, Sr., and the grandson of William Clark, the famous American explorer who was one half of the Lewis and Clark Expedition. A colonel in the American army, Clark, Jr. was inspired to open a jockey club and racecourse in Louisville, Kentucky, after traveling to Europe and meeting many famous horse racers. This led to the creation of Churchill Downs and the first-ever Kentucky Derby, which was held in 1875.

Where did the Kentucky Derby start?

The Kentucky Derby started in the town of Louisville, Kentucky, which had a long history of horse racing that started before Kentucky even became a state in 1792. In 1875, the official Kentucky Derby was inaugurated by Meriwether Lewis Clark, Jr., who had opened a new racecourse for his Louisville Jockey Club on land owned by his uncles, John and Henry Churchill. The track was named Churchill Downs in their honor and since then has been the site of every Kentucky Derby through the present day.

Pages Related to History Of The Kentucky Derby