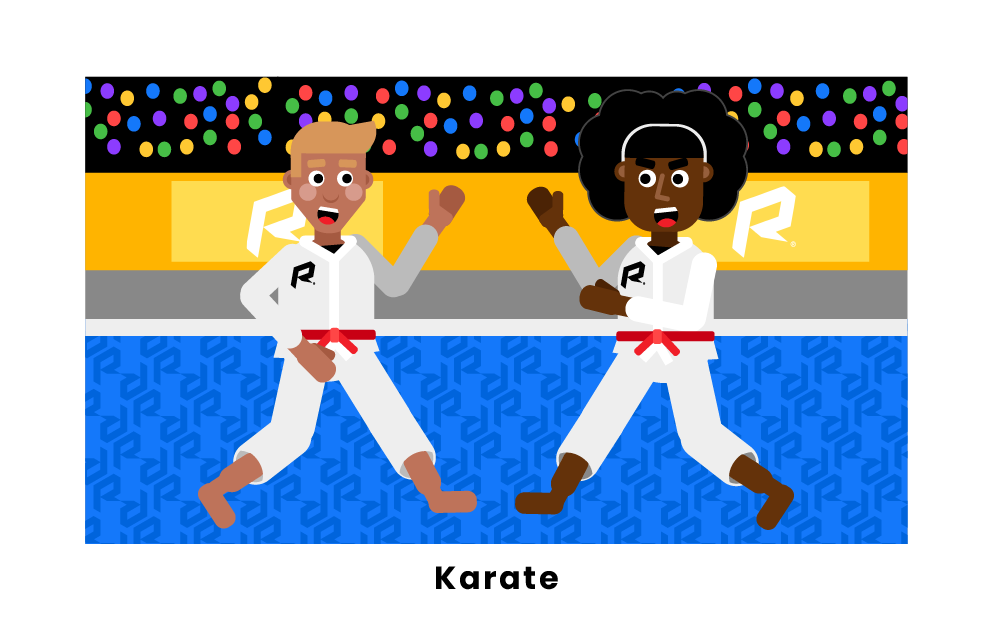 The main concept of karate is the art of self-defense. It is a weaponless martial art that requires use of all parts of the body in numerous attacking and defensive techniques. Belt colors are used to signify a karate student's level, white being a beginner level, and black being a highly advanced level. There are three different types of karate practices, known as Kihon (basic technique), Kata (combat simulation), and Kumite (sparring). 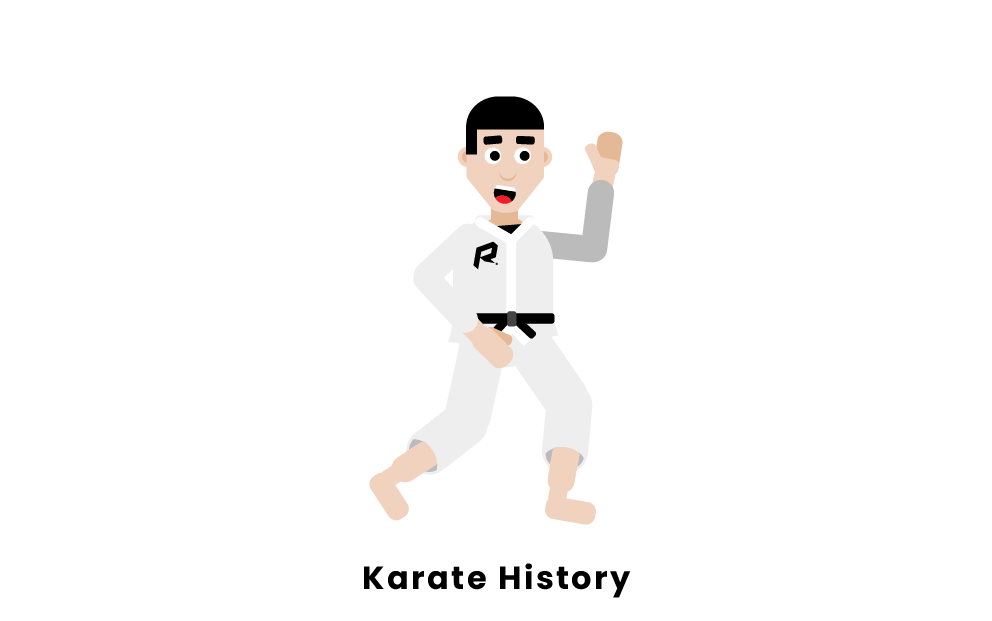 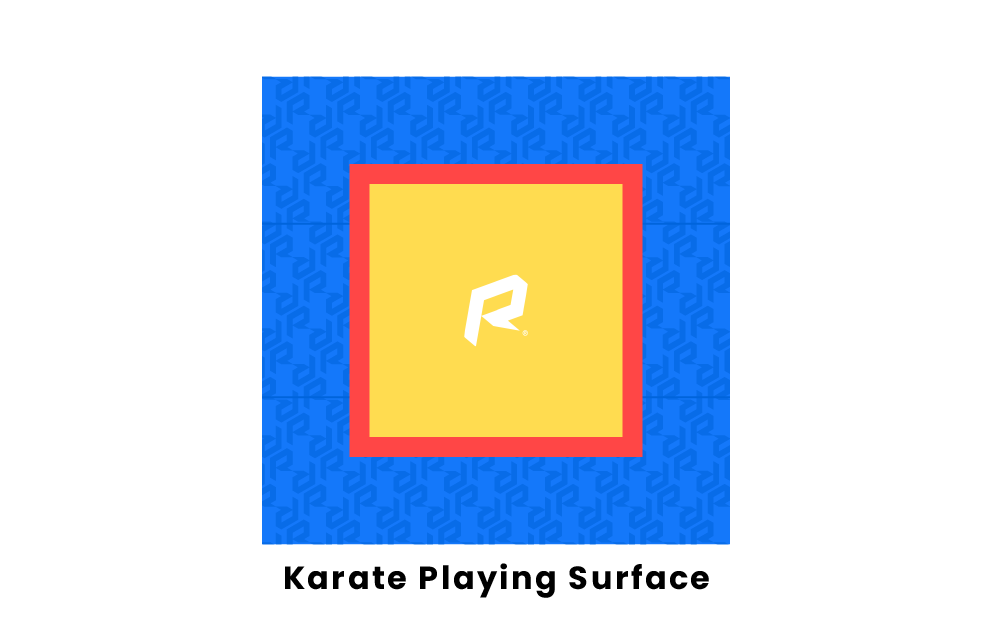 The main purpose of dojo surfaces is to have a good balance between safety, comfort, and flexibility for movement. A typical dojo floor is made up of high-density foam around 1 to 1 and half inches thick. Crash pads are also used often in dojos to protect fighters when rolling or performing takedowns. 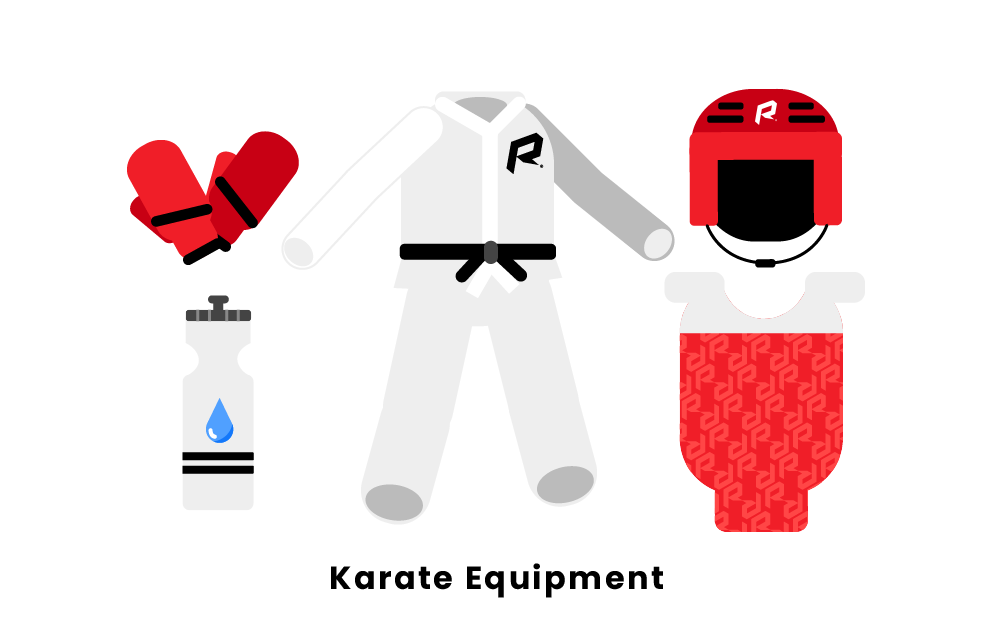 The main piece of equipment required for karate is the uniform. An extension of a karate uniform is a karate belt. Other important equipment for karate are groin protectors, mouth guards, hand guards, chest protectors, and foot guards. Other equipment can be purchased for training purposes, such as training dummies. 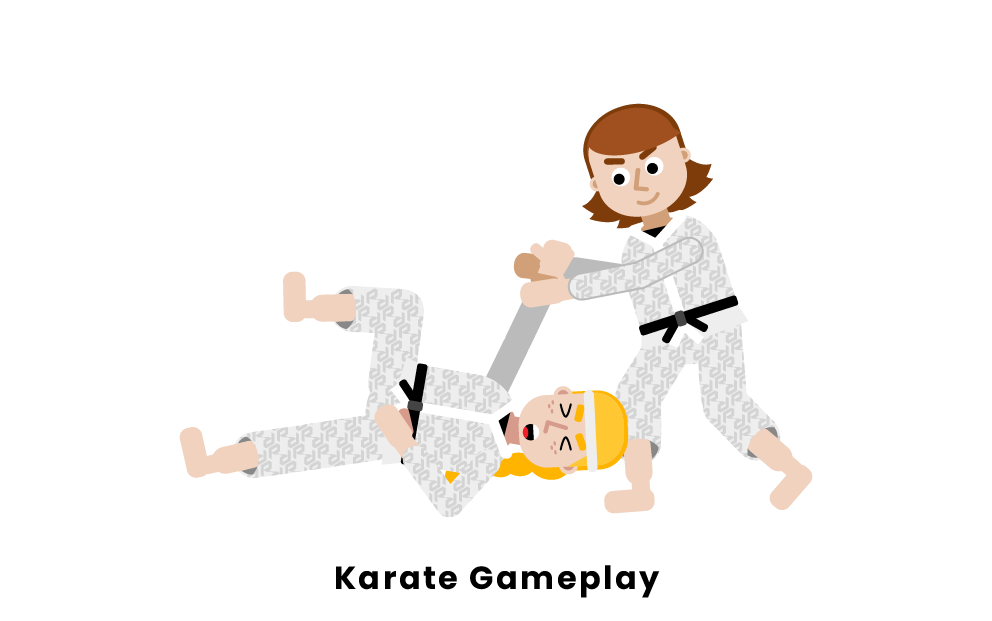 A karate fight or spar is known as Kumite. Many competitive karate fights are overseen by the World Karate Federation. The goal of a karate fight is to score points by landing kicks, punches, and throws. Points are awarded based on where the hits land and how good a fighter's technique is when a hit lands. 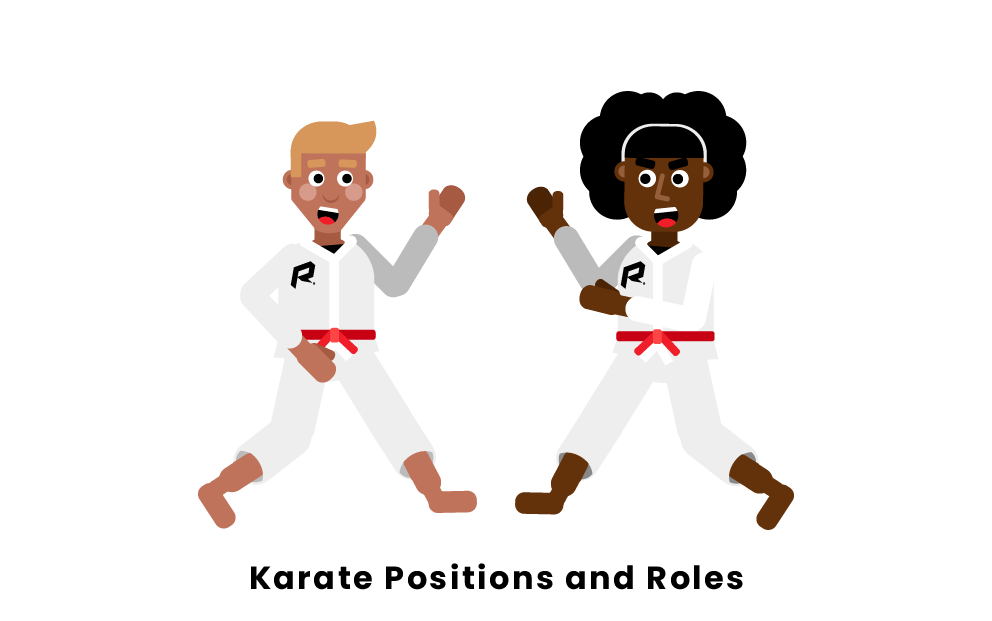 Karate consists of two fighters, a referee, and judges for deciding on points scored. The fighters go head-to-head against each other, while the referee ensures a fair and safe fight. Along with that, referees also indicate to judges when they think a scoring technique was used, and the judges have final say on how many points were scored.

The basic rules of karate revolve around scoring. There are seven areas of the body a hit can land in order to get points. They are the head, face, neck, abdomen, chest, back, and sides. There is also a criteria for scoring techniques. The criteria consists of observing form, timing, distance, vigorous application, awareness, and a sporting attitude. Fighters can score 1, 2, or 3 points based on types of technique used. 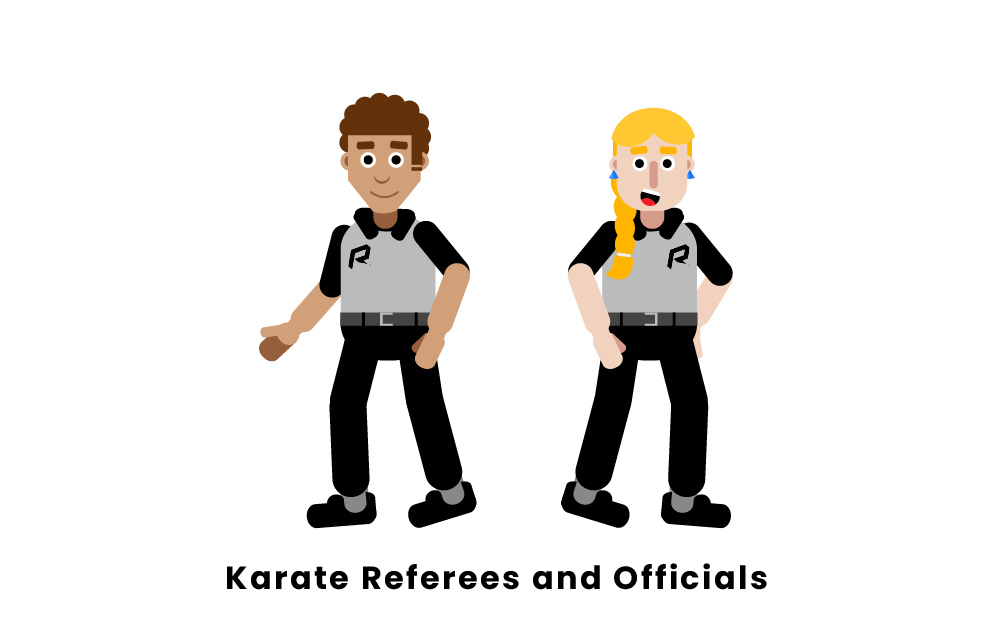 Referees serve the purpose of ensuring the fighters abide by the rules of karate. They also help with the scoring for the fight. A singular referee watches over a fight, and indicates to a group of judges when they think a scoring technique took place. The judges decide if they agree, award the amount of points they deem fitting, and then the fight continues. 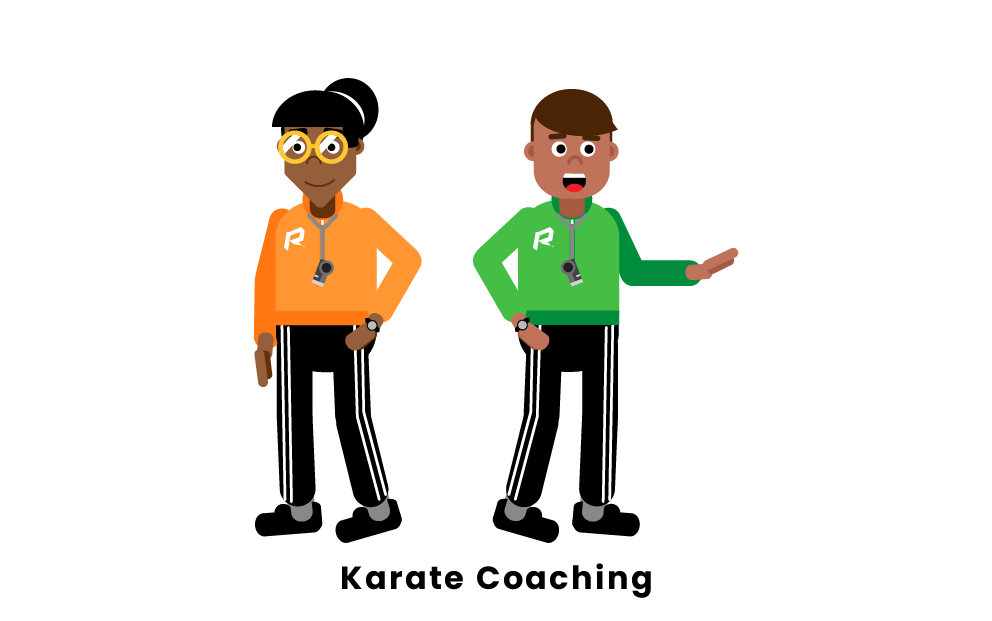 Karate coaches, more commonly known as instructors, teach groups of karate students or a single student all the different techniques in karate. Instructors not only teach the physical skills required in karate, but also attempt to teach the core values of martial arts. Instructors teach karate classes with a belt progression system. If one of their students enters a competition, they may even go with the student to guide them. 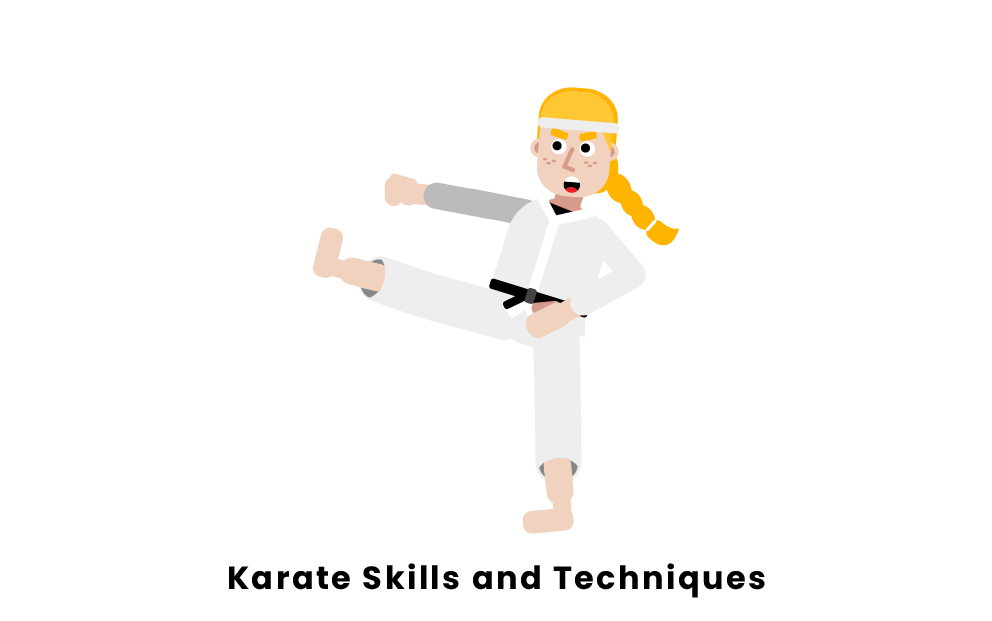 While karate is a contact sport, it mainly focuses on being quick, agile, and a skilled fighter. There are 5 main techniques that karate beginners must know to get better. They are front kicking (mae-geri), upper blocks (jodan uke), knee strikes (hiza-geri), elbow strikes (hiji ate), and palm-heel strikes (shotei uchi).

A karate match can be won in 4 different ways. When one fighter has more points than the other at the end, one fighter obtains an 8 point lead, a fighter is deemed unable to carry on, or a fighter is disqualified. The basic strategy of karate is to try land hits with good technique without the opponent landing hits. The more difficult the technique, the more points a fighter earns, but that also leaves them more vulnerable to take a hit.

There are numerous drills people can do to get better at karate. The main focus of drills include developing instinct, footwork, striking, agility, and coordination. A great example of a common drill is having two fighters spar with each other and putting restrictions on each one to force them to work on something specific, such as their weak side for striking. 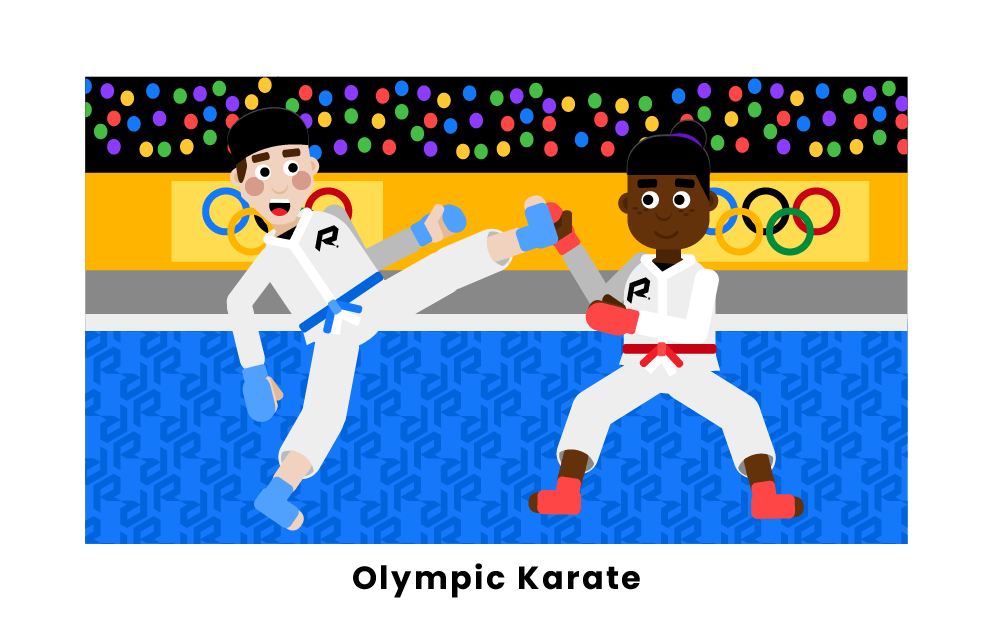 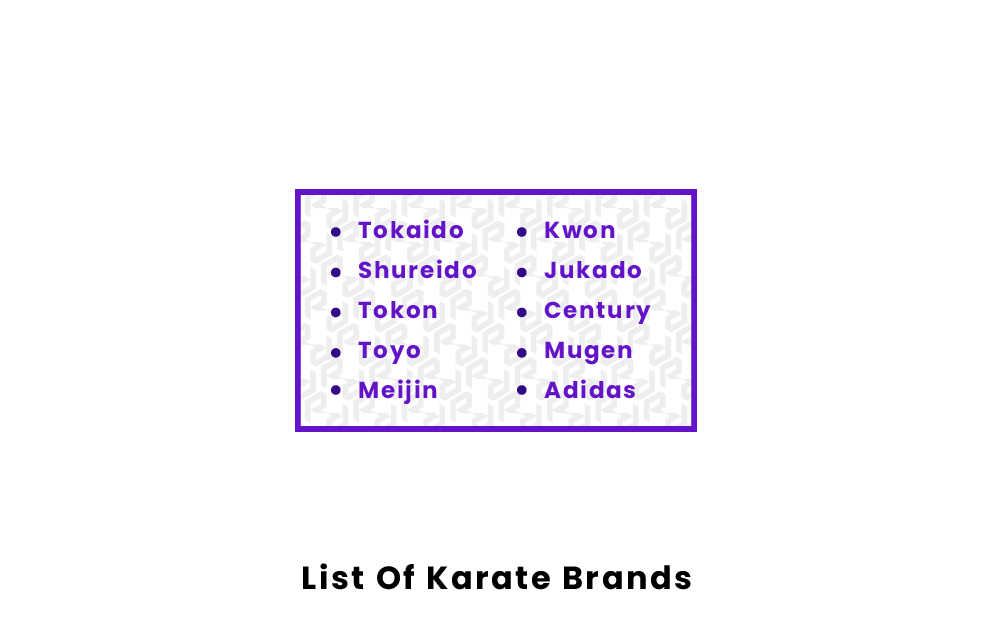 Tokaido: One of the oldest, most well known karate brands. Based in Japan. High quality material leading to a high price.

Shureido: Similar high end quality, price, and fame as Tokaido, however, uniforms have a unique pale blue color. Also based in Japan.

Tokon: Has uniforms suitable for all levels of karate, including a tournament line of uniforms. A german based brand with uniforms ranging from $55 to $195.

Toyo: Japanese based and costs around $195. High end quality, but lacks the fame of Tokaido and Shureido.

Meijin: An American-made brand that offers lots of freedom with customization and sizes. A newer brand with a typical price range of $100 to $150.

Kwon: A German brand that started out making taekwondo uniforms. Now produces different styles of karate uniforms for higher levels, including tournaments, and hover around $100 in price.

Century: Non-traditional uniforms compared to other companies. Prices range between $50 and $150 depending on unique features and quality of material.

Mugen: Well-rated company, but is better known in Europe than the United States. Uniforms are similar to Toyo's but cheaper, ranging from $70 to $80.

While fighters get most of the credit, coaches are very important for success in karate as well. Here are some of the most famous coaches in the world.

While there are many famous karate fighters, most of them live double lives that made them famous along with their famous karate careers. Here are a few examples:

While karate isn't as closely followed as other sports, there are still plenty of leagues. While there are leagues with things similar to karate such as kickboxing and taekwondo, there are 4 premier leagues that focus on karate specifically.

While there are many small club teams in karate, the real high level teams are the national teams. Here are the 3 best countries based on medal count in the Karate World Championships.

There are many different events that take place within a karate competition. Using the World Karate Championship as a guide, here are a few examples of events.

Men And Women Individual Kumite: Single fighters go head to head representing their country in an effort to become the best fighter in the world

Men And Women Team Kumite: A team of fighters goes head to head representing their country to try and be crowned the best team in the world

Men And Women Individual Kata: Single fighters perform techniques and movements to earn the highest score and be the best kata fighter in the world

Men And Women Team Kata: A team of of fighters performs techniques and movements to earn the highest score and be the best kata team in the world

Men And Women Team Kata With Bunkai: Bunkai adds an element of analysis into kata. It essentially converts the dance like kata into fighting techniques, like a combination of kata and kumite

While there are plenty of karate tournaments out there, none of them rival the importance and pedigree of the Karate World Championships. Hosted by the World Karate Federation, the Karate World Championship is the most prestigious tournament in the world, consisting of multiple events and countries competing. Fighters represent their countries, the most important aspect of sports to many athletes. 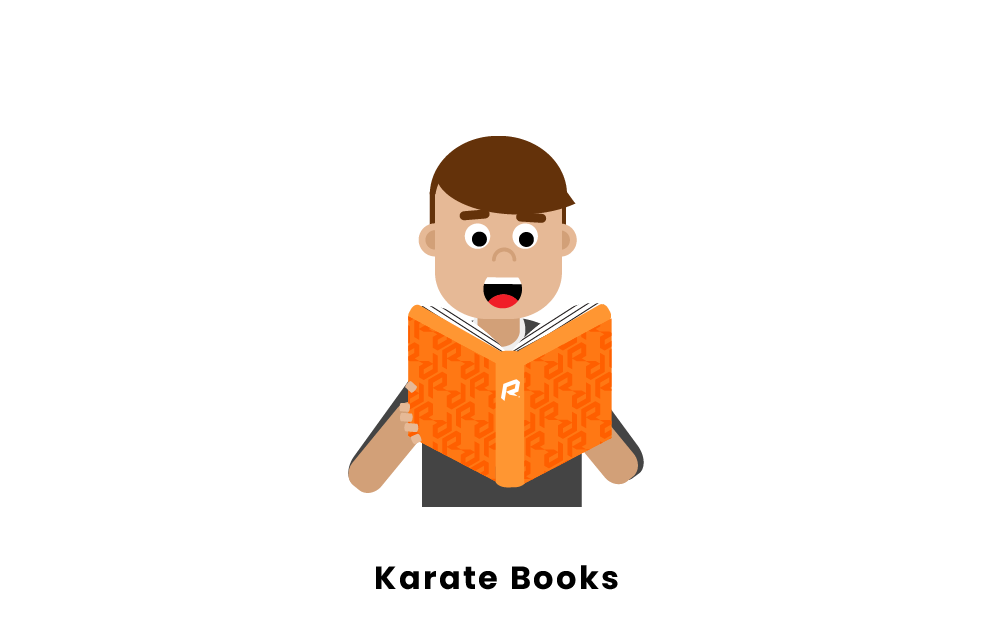 While karate is a tough sport to master, there are plenty of books out there that help people to learn the sport. Here are a few of the most well received books in the karate community. 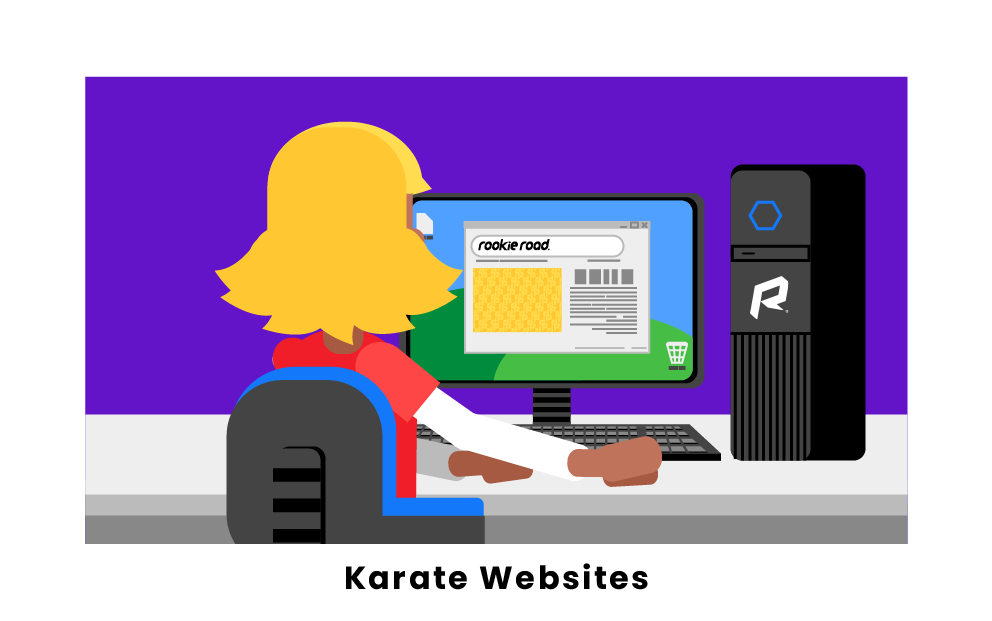 While there are many different karate websites on the internet, a few stand out. Here are some of the most respected websites in the karate community.

Karate is a martial arts form that preaches self defense exclusively with the body and mind.

What country is karate from?

Karate originated in the country of Japan, but was also heavily influenced by Chinese martial arts.

What is the purpose of karate?

The purpose of karate is to exercise both physically and mentally. Karate helps people to develop a more clear thought process, self-confidence, composure, and a deeper understanding of oneself along with the physical benefits. Along with fighting and self defense, karate aims to improve an individual as an all-around person.

How dangerous is karate?

Considering karate is a sport martial art indicating that there is concern for an opponent's well-being, it is no where near dangerous on a lethal level. However, as with most martial arts, bruises and sprains occur most often.

What does karate literally mean?

The word karate is comprised of two chinese characters kara and te. Kara translates to "empty", while te translates to hand. Therefore, the literal translation of karate is "empty hand," which most likely refers to it being weaponless fighting.

Pages Related to What is Karate?