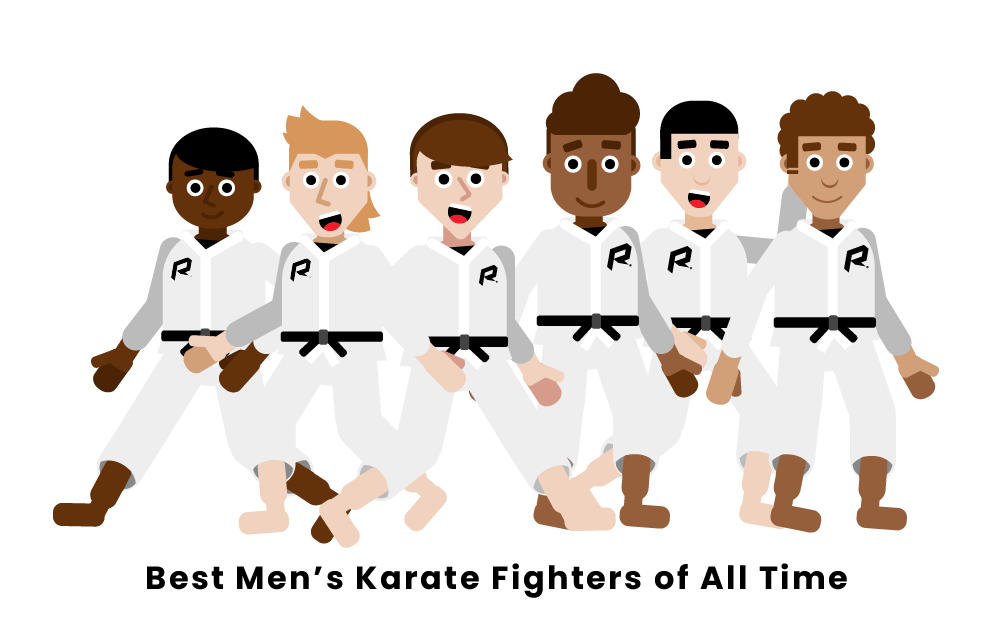 Karate is one of the most popular and well-known forms of martial arts in the world, and many people participate in it at various levels, from amateur to professional. It is likely that many people in America know someone who took karate lessons as a child, but many people also know of the many famous athletes who have gone beyond childhood lessons and distinguished themselves professionally in the dojo. Here, we take a look at the top six best men’s karate fighters of all time.

Who are the best men’s karate fighters of all time?

Joe Lewis is known across the world for being one of the best and most capable American karate fighters the world has ever seen, a man with incredible raw talent and skill. Born in 1944, Lewis joined the United States Marine Corps at the age of 18 and was stationed in Okinawa, Japan. While abroad in the service, Lewis began to study the Shorin-Ryu discipline of karate, learning from teachers such as Eizo Shimabukuro, Seiyu Oyata, Chinsaku Kinjo, and John Korab. Under their tutelage, Lewis received his black belt in an astonishing seven months, much shorter than the average of three to four years. When Lewis returned to America, he began a 17-year long fighting career that was filled with successes and titles, which he won more of than any other tournament fighter of his day.

Lewis trained with other great martial artists such as Bruce Lee, Sugar Ray Robinson, and many more. He also went on to be the father of American kickboxing, a new discipline that he helped to pioneer in the United States. Lewis amassed many firsts in his career, among them being the first-ever World Professional Karate Champion, the first U.S. Heavyweight Kickboxing Champion, and the first Professional Karate Association Heavyweight full-contact Karate Champion. In 1974, Lewis was officially inducted into the Black Belt Hall of Fame. Among his other pursuits in the field of karate were the creation of dozens of instructional videos and DVDs on the sport, as well as the authoring of several books on karate and kickboxing.

Though Joe Lewis may be the greatest karate fighter of all time, it is an indisputable fact that few people in America (and many around the world) are not familiar with the name and legacy of Chuck Norris. Over the course of his decades-long careers in both martial arts and entertainment, Chuck Norris has put his karate skills to good use both in the dojo and on the silver screen. Norris began to study martial arts in Korea during the 1950s while serving in the U.S. Air Force.

After returning from service, Norris opened up dozens of karate studios and taught for a few years, but in the 1970s, he transitioned his talents to the film and television industry, starring alongside legendary martial artist Bruce Lee in Way of the Dragon. Norris’ film career took off during the 1980s, and he became one of Hollywood’s most prolific action stars. In the 1990s, Norris headlined the famous action crime television series Walker, Texas Ranger, which aired from 1993 to 2001. During his martial arts career, Norris won a number of tournaments and accolades, including the World Middleweight Karate Championship, which he won in 1968 and successfully defended five times. He officially retired from martial arts in 1974 in order to pursue his acting career. More recently, Norris has also been a supporter of numerous charities, such as the Make-A-Wish Foundation and the United Way, and has even founded his own charity, Kickstart, which offers martial arts training to middle-school students. Norris, like Joe Lewis, has also written several books.

Ron Marchini was born in Stockton, California in 1945, and began to train in Renbukai Karate under Gordon Kennedy in 1964. Four years later, in 1968, Marchini took the next step in his martial arts career by traveling to Japan to continue his schooling, becoming the first American athlete to train in Renbukai in Japan. While in Japan, he learned from Masayuki Koide, Gordon Kennedy’s former instructor, and earned a 4th-Degree Black Belt. With his black belt achieved, Marchini went on to fight in tournaments, becoming a champion Renbukai fighter in the late 1960s and early 1970s. From 1968 through his retirement in 1972, Marchini was constantly ranked in the top three of all karate tournament competitors, and in both 1969 and 1970, he received Black Belt Magazine’s #1 competitor ranking, even appearing on the cover of the magazine. Marchini was known for his famous fight with Chuck Norris in May of 1964, a fight which Norris won by half a point.

Marchini amassed many victories in his career, including grand championships at the 1968 North American Tournament of Champions and the 1971 National Black Belt Championships, among many others. Marchini was a frequent member of the United States World Championship Karate Team, fighting in both the first and second Karate World Championships and coaching for the team thereafter. He has won several awards as both a coach and a referee, including seven Golden Fist awards. Marchini has owned three Renbukai Karate studios with fellow master Leo Fong and is currently the only licensed Renbukai instructor in America. He and Fong have also co-authored many books on Renbukai Karate.

Born in June of 1943, Mike Stone began to learn karate in his native Hawaii while attending high school and joined the Army after graduating, receiving a station in Okinawa. While in Japan, he met Sergeant Herbert Peters, a karate instructor, and began to learn Shorin-Ryu karate, achieving his brown belt in three months. Like Joe Lewis, Stone advanced quickly, earning his black belt in six months. When he first began fighting in tournaments, Stone quickly became unstoppable, winning every single individual black belt match he fought in, as well as all of his kata competitions.

When Stone retired from tournament fighting, he had 91 consecutive black belt victories, the only black belt with such a record. In 1971, he was inducted into the Black Belt Hall of Fame for fighting, and he was inducted a second time in 1994, this time as an instructor. In addition to his fighting career, Stone followed fellow fighter Chuck Norris into the entertainment industry, starring in and even writing films. One of his stories became the basis for the popular Enter the Ninja film series of the 1980s. Stone also branched out into various other fields, becoming a sports instructor, inventor, bodyguard, and personal fitness trainer, among other things. Today, Stone is a motivational speaker who has his own seminar on living one’s dreams and has also published many books.

In the 1970s, Mike Warren was known across America as the best karate fighter in the United States and had the skills and power to back up the name. A withdrawn man, Warren began to practice karate at age 13, after his older brother Albert began to practice boxing. Warren learned karate from famed martial arts master Ki Whang Kim, who taught an all-black karate class that Warren was eligible for. Under Kim, Warren studied tang soo do but also gained some proficiency in short-stick fighting, nunchaku, and aikido. Though shy and quiet outside the ring, in the dojo, Warren employed a fierce and ferocious fighting style, utilizing incredible speed and complex combinations of techniques. Warren was known for competing only in Korean-style tournaments and competed for the American team at the World Taekwondo Championships, where he was ranked second in the heavyweight competition of 1973, losing by a controversial decision. Warren went on to become a Martial Arts Grandmaster, defeating many other famed fighters in the ring, including Joe Hayes, Bill Wallace, and Al Cheeks.

Known in the karate world as “Superfoot,” Bill Wallace (along with Joe Lewis) was one of the initial pioneers of kickboxing. Born in Portland, Indiana, in 1945, Wallace trained as a wrestler during high school and began to study Judo in 1963, though an injury forced him away from the sport three years later. While healing, Wallace decided to learn karate, and after returning to the dojo, he began to master shorin-ryu under instructor Micky Geneck. Soon, Wallace was ready to fight in tournaments, and when he began his professional career, he experienced remarkable success, winning almost every major event in his sport.

Wallace won the U.S. Karate Championship three times, the USKA Grand Nationals three times, and the Top Ten Nationals twice. He then began to take up the sport of full-contact karate, which would later become kickboxing, and became the PKA Middleweight World Champion in 1974, defending the title 11 times over the following five years. In his final kickboxing match, Wallace faced Robert Biggs, a challenger who had a sterling 15-1 record and won in 12 rounds by decision. The match was Wallace’s 23rd consecutive kickboxing win.

Wallace was named to the Black Belt Hall of Fame three times in seven years and also has a degree in physical education and a master’s degree in kinesiology, which is the study of human movement. In his retirement, Wallace has authored three books and been involved with a number of film and television productions, including films with Chuck Norris, Jackie Chan, and Mickey Rourke. Wallace also conducts seminars worldwide and owns several martial arts schools.

Who is the greatest men’s karate fighter of all time?

Joe Lewis is widely considered the greatest men’s karate fighter of all time. Often referred to as the “Father of American Kickboxing,” Lewis won more titles than any other karate tournament fighter over the course of his 17-year career. Lewis was known as the first-ever World Professional Karate Champion and was also the first U.S. Heavyweight Kickboxing Champion. He also became the first Professional Karate Association Heavyweight full-contact Karate Champion in 1974, the same year he was inducted into the Black Belt Hall of Fame. To his fellow fighters, Lewis was known as "The Greatest Karate Fighter of All Time," a title his own peers chose to give him in 1983.

What men’s karate fighter has won the most Karate World Championships?

Who won gold medals for men’s karate in the 2020 Summer Olympics?