The Top 10 Rules Of Karate 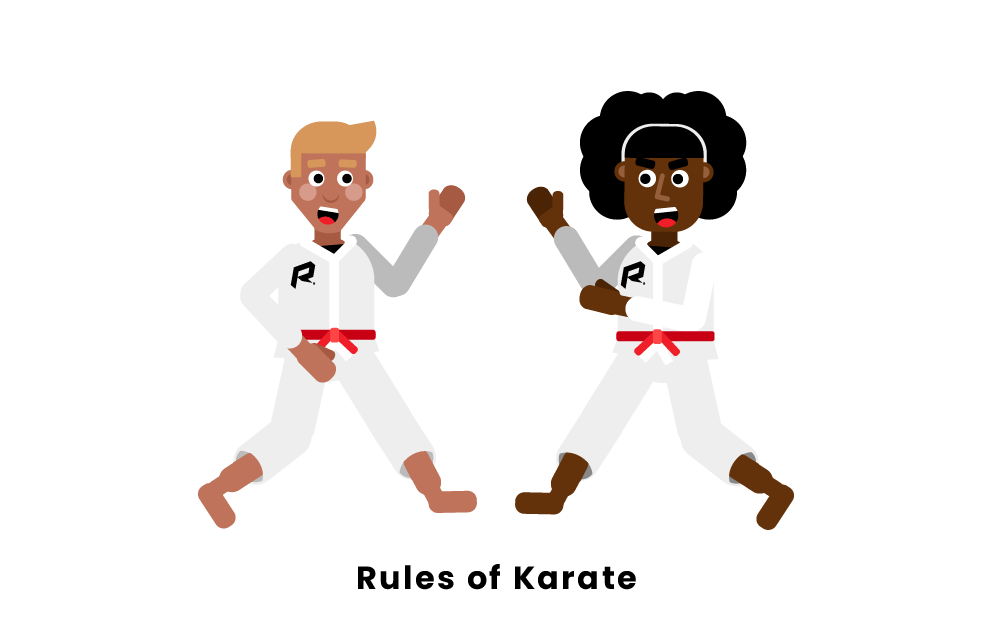 Karate is a form of martial arts that encompasses various different striking and defensive techniques. The sport rose to popularity in Japan during the early 1900’s and quickly spread its way across the world. Karate can be performed by people of all ages, and teaches both mental and physical strength. Participants wear the traditional karate uniform called a gi, and a colored belt to represent their skill level in the sport. Karate can be practiced in numerous ways, whether it be as an art, for self-defense, or as a combat sport. There are many opportunities to get involved in karate with thousands of beginner friendly schools in the United States. Karate made its first official appearance as an Olympic sport in the 2020 Summer Olympics in Tokyo. Read on to learn the top ten rules of karate.

What are the Top 10 Rules of Karate?

The top 10 principles of karate are:

“Karate begins and ends with respect,” is a common phrase that you will hear in karate schools around the world. Courtesy is a cornerstone of the sport, as both mental and physical strength are a part of the training in karate. Children beginning to learn karate will first receive lessons on respect and self-control before ever learning striking techniques. First and foremost, it is important to have respect for the martial arts discipline itself. That means following traditions, learning the history and meaning behind the sport, and abiding by its rules. Connections between students and their teachers are of utmost importance in karate. Showing respect for those who are willing to teach you, as well as those learning along with you, is a vital part of what karate values.

2. Use what you Learn Wisely

Using what you learn in karate wisely can have two meanings. Firstly, many of the strikes learned in karate have potential to harm others if used improperly. This means that the techniques learned in karate should only be used for a just cause such as self-defense. Never use a technique learned in karate for anger or revenge, as this is against the very principles karate was founded upon. Secondly, when practicing karate techniques, it is important to be cautious and aware of the strikes you use. Controlling the strength of your strikes, especially against opponents or training partners is extremely important to keeping yourself and those around you safe. You must be wise in the use of your techniques, even during practice, as karate is not meant to harm others.

3. Karate goes Beyond the Dojo

Many lessons learned in the karate dojo are also applicable in the real world. Principles such as respect, self-control, and integrity are emphasized in karate but are taught to be upheld at all times, not just during training time. Karate is about developing yourself both physically and mentally, so the mental fortitude practiced during training should be extended to your everyday activities as well. Students should represent themselves well inside, as well as outside, of their dojo. Additionally, if it ever becomes necessary to apply karate techniques outside of your training facility, the same control and respect must be exerted in any environment.

4. There is no First Attack in Karate

There is no first attack in karate. This rule references the belief that karate techniques should only be used when absolutely necessary. A central belief of this martial arts discipline is that the purpose of karate is solely for self-defense. Therefore, those trained in karate should never attack first, and only respond with force as a last resort. The best option is to remain peaceful or escape an attack before utilizing techniques learned through karate. To abide by this rule, those trained in karate should never allow themselves to begin an altercation or attack, especially using the striking techniques learned in karate. Remaining calm and composed in confrontational situations is a key to following this rule. Upholding this principle is vital to karate’s traditional beliefs in respect and self-control.

Character development is an essential part of what karate teaches to its participants. Karate teachers emphasize mental strength just as much as physical techniques when working with their students. A misconception of karate is that it focuses on physical prowess and striking techniques. In reality, karate is about strength of the mind and becoming the best version of yourself both physically and mentally. Karate values traits such as integrity, courtesy, confidence, discipline, and self-control. It uses character development to teach students lessons that can be applied outside of martial arts.

6. Put Forth your Best Effort

Karate masters expect each and every student to give their best effort at all times. If students are not focused on trying their hardest, then they are not dedicated enough to master the art of karate. Training in karate can be tough and exhausting at times, and requires particpant’s fullest determination. It’s not about outperforming others, but instead about performing to each individual’s own full extent. Whether in success or failure, if you give your full effort there is nothing to regret; it only serves as motivation to succeed in the future. Giving your full effort in training also means knowing your limits. There is no shame in taking a break during training. Giving your best effort in karate is essential to fully grasping its lessons. Students should always arrive eager to learn, motivated to grow, and give 100% effort during karate training.

This relates back to karate’s core principle of using your knowledge wisely, as many of these rules are connected. Those trained in karate are expected to use it carefully, because using karate carelessly is not what its inventors had envisioned. Poorly utilizing karate’s techniques can lead to negative consequences, as its creators warned. One must be extremely diligent during karate training. Certain techniques in karate will require careful precision and complete focus to practice safely. The safety of yourself and those around you is vital in the karate dojo. In fact, karate teachers suggest removing carelessness from your entire life, not only during training. This aligns with karate’s belief of improving one’s overall character through training in the sport.

8. Make Adjustments According to your Opponent

An important part of karate is knowing your own strengths. It is the responsibility of each individual to gauge their strengths and to use them wisely. Each situation where karate is utilized will not require the same amount of power. This is extremely relevant when practicing the sport, as not each opponent or training partner will have identical skill levels or physical abilities. You don’t always need to exert your fullest force on opponents or training partners, as karate is about growth for everyone involved. Therefore, students must learn to adjust the strength of their strikes when sparring or training with others. It is not about victory or defeat; instead, helping yourself and others focused on improvement is much more valuable. This connects with karate’s founding principle of respect, as showing respect for opponents is important in martial arts.

Having a beginner's heart means always being eager to learn. Students should constantly be ready to learn new lessons in karate, regardless of their skill level. No matter how long you have been practicing karate, there is always something more to learn or improve upon. In karate, if you think that you have learned everything possible, then you are mistaken. Students should always welcome the ability to gain new knowledge, as there is always room for growth. A passion for learning is what allows beginners to eventually reach the level of master. The motivation to learn is what separates good martial artists from the great ones.

This final rule encompasses every rule before it. Being faithful to karate means following its principles and respecting traditions. By upholding the high standards which karate sets for its students, they are being faithful to the martial art itself. Karate students should look to apply the lessons learned during training to obstacles in their everyday lives. Most importantly, students should use the techniques they learn wisely and only for self defense. By doing so, it shows a student’s faith in the skills they have gained throughout their time training in the sport. The bow in karate is meant as a sign of respect and faith for the martial art itself. Students will frequently show their faith by bowing at times throughout training sessions or fights, specifically at the beginning and end.

What are the different belt ranks in karate?

In karate, different belt ranks are indicated by the color of the belt. While there are generally six or seven usual belt rankings that are used, more individual colors can often be found per dojo. The most commonly used belt colors in order from least to most experienced are white, yellow, orange, green, blue, brown, and black. Red and purple belts are also often used in particular cases. On top of the base colors, stripes can also be used to indicate progression within a certain color rank.

Can you kick the face in karate?

How do karate tournaments work?

In karate, tournaments can have a variety of different formats. Competitors most often compete in a series of “kumites,” which is an individual match between two opponents. A fighter can win a kumite if they take an eight point advantage over their opponent or by having more points at the end of a bout. Besides this, the format of a karate tournament is completely up to the discretion of the committee holding the event. Certain formats, such as single elimination, double elimination, and round robin are the most commonly seen in karate tournaments.

Pages Related to The Top 10 Rules Of Karate