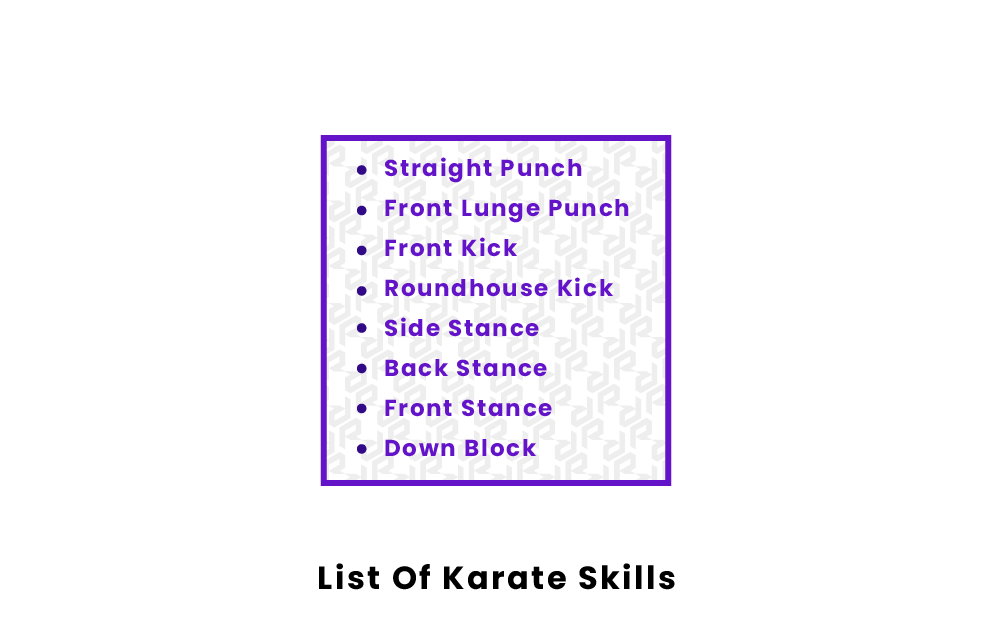 Like any sport, karate requires certain broad skills that overlap with many other sports. As a martial art, karate also requires athletes to possess a range of unique skills and techniques in order to perform well in competition. Keep reading to learn about the most important techniques to learn in karate.

Below is a list of the most important skills needed for karate:

Known as Choku Zuki in Japanese, or more commonly as the jab, the straight punch is the most basic punch there is in karate. This move is made by forming a fist, with fingers tucked into the palm and the thumb tucked in between the first and second knuckles. The striking point should be the knuckles of the pointer and middle finger, as it is the strongest part of the hand.

Known as Oi-Zuki in Japanese, this punch starts by stepping into a front stance, or Zenkutsu Dachi, with the punching leg. When throwing the punch, the arm technique should be the same as a straight punch. However, for this punch, you also push both the front hip and pectoral forward with the punch in order to add force.

One of the basic kicks in karate, known as Mae Geri in Japanese, the front kick is very versatile, as it can be used quickly and sharply as a snapping front kick or longer and more powerfully as a thrusting front kick. It can also be performed from the back or front leg in a fighting stance. This kick follows the four basic steps of any kick: chamber the kick by bringing the leg that’s kicking up with a bent knee and ankle, perform the kick, return to chamber, and finally put the leg back down. The striking point should be the flat of the foot.

Known as Mawashi Geri in Japanese, a roundhouse is a rapid kick that gains power through rotation of the hips. It follows the same four basic steps (chamber, kick, chamber, down) and is done off the front leg from the side of the target. The kicking leg should be raised, knee and ankle bent, with a straight line from the shin bone down to the top of the foot. This is then released in a snapping motion, with the striking point being the top of the foot.

There are various stances in karate that help maximize offense and defense. The first of the three basic stances is the side stance, known as Kiba Dachi in Japanese. This stance is performed by keeping the feet wide and parallel, keeping the back straight, having knees and feet pointing somewhat inwards, and keeping most of your weight on your lower body.

Another one of the three basic stances, the back stance is also known as Kokutsu Dachi in Japanese. This stance is performed by keeping a straight front leg with forward-pointing feet, a slightly bent front knee, a heavily bent back knee, keeping both feet apart by one and a half times your shoulder width, keeping an upward pelvis, keeping a straight back and neck, and keeping 70% of your weight on your back foot, with 30% of your weight on your front foot.

The last of the three basic stances, the front stance is also known as Zenkutsu Dachi in Japanese. This stance is performed by keeping an extended back, the rear leg straight at the knee, the front knee bent, and the back foot turned outwards from around 30° to 45°. Your feet should be wider than shoulder width, with 60% of your weight on your front foot and 40% of your weight on your back foot.

What are some basic skills in karate?

The most basic skills in karate are the straight punch (Choku Zuki), front kick (Mae Geri), and roundhouse kick (Mawashi Geri). The straight punch is the most fundamental punch in karate, and the front and roundhouse kicks are the simplest forms of kicks. Basic stances and blocks are also important foundational skills. These are among the first moves you will learn when you start practicing karate.

How many types of karate are there?

There are a variety of types and styles of karate, with about 75 total types currently existing. The most common types of karate include Shotokan, Goju-ryu, Shito-ryu, Uechi-ryu, Shorin-ryu, Wado-ryu, and Kyokushin. Each of these karate types consist of similar skills, which are executed in subtly different ways.

What are stances in karate?

In karate, there are many different stances, which are prescribed positions for a karateka’s feet, shoulders, arms, and body. Stances (Dachi) are designed to maximize power and efficiency in movement in combat situations. The types of stances can be categorized as high, middle height, or low stances, depending on how the body is positioned. Mastering new stances is one of the most important parts of advancing in karate.