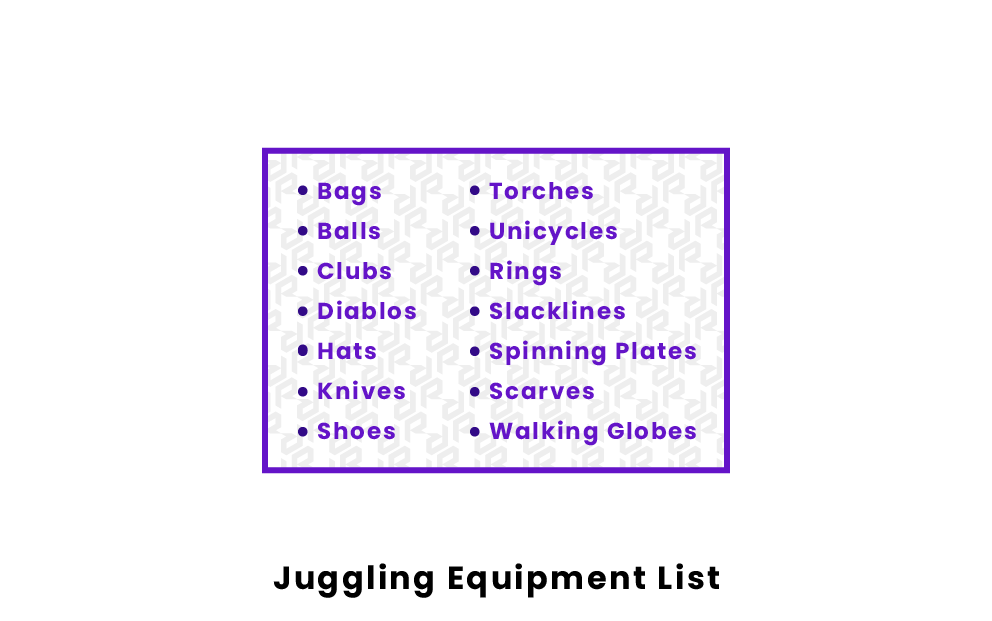 Jugging is a fun individual sport that requires little equipment. Juggling can also be done anywhere and in any climate. People can juggle just about anything, from balls to batons. However, expert jugglers use special equipment and are able to juggle dangerous objects such as knives and flaming torches. For beginners, learning to juggle bean bags and plastic balls is essential and will get you on your way to being an advanced juggler with practice and time. 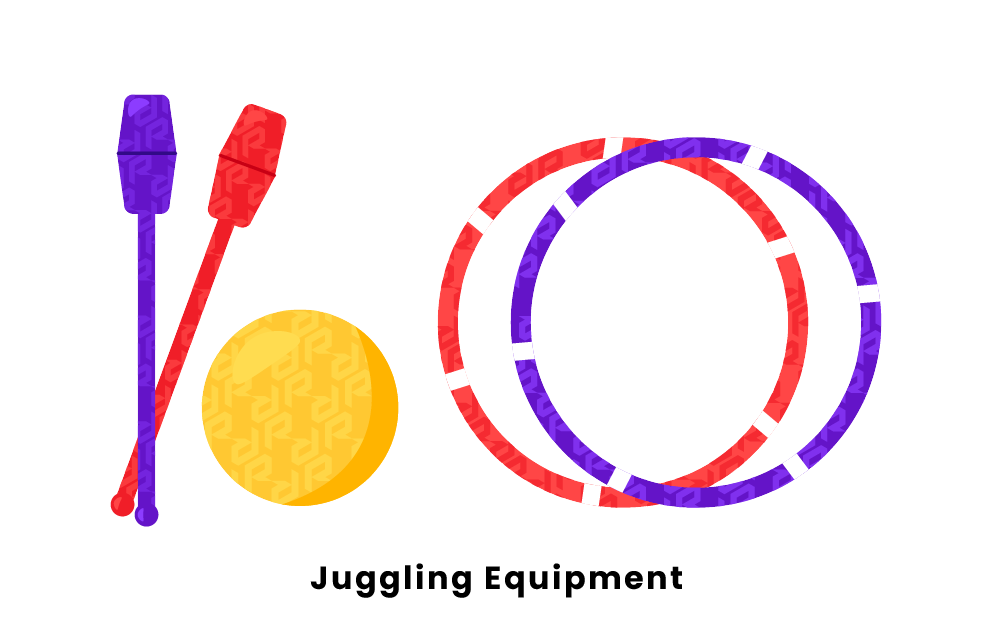 Juggling is a sport that requires little to no equipment aside from the objects necessary to juggle. Juggling objects include beanbags, batons, plastic balls, discs and a juggling object called a diablo. Below find a list of equipment needed to practice and perform the sport of juggling.

Juggling bags help athletes carry and travel with their equipment around. Juggling equipment bags come in all shapes and sizes. Small drawstring like bags are good for jugglers who only juggle items like beanbags and clubs, while big ones are for more experienced jugglers. Regardless, a juggling bag is a good item to have in order to keep all equipment organized and safe from getting lost or stolen.

Juggling balls are some of the most basic pieces of equipment a juggler can have. They are also one of the first objects a juggler learns to juggle with before moving on to harder and more dangerous objects. While most balls are similar to bean bags, jugglers can juggle any round object, such as fruit, baseballs, and tennis balls. The average cost of a set of 3 juggling balls goes for about fifteen dollars. However, more advanced juggling balls can be much more expensive as they vary in size, weight, and color.

Juggling clubs are a basic part of a juggler's array of juggling equipment. They are constructed so that the juggler can easily grab the handle at the end of the club. The most common club sizes are 88mm, 95mm and 105mm. Most of these clubs, however, have the same shape and only differ in the shell width. A set of average juggling clubs cost about $25 dollar per club but price can vary depending on brand, size, and color.

Juggling diablos are a special kind of juggling equipment. The object, made up of two cylinders attached to an axel, is spun on a string that is attached to two hand strings. In addition, multiple diablos can be spun on the same string. The diablo derives from the yo-yo, which are also used by jugglers in a similar fashion to the diablo.

Juggling hats are a fun cheap addition for jugglers to add to their set of tricks. Aside from wearing the hats, jugglers can learn to juggle three or more hats at a time. Unlike bean bags or juggling clubs, juggling hats are not weighted as heavily, making them a little bit harder to juggle compared to other objects. The style of hat most jugglers use is called a bowler hat.

Juggling is usually a stationary sport that is conducted in one space. As a result, closed-toed workout shoes are typically worn by jugglers when juggling. Just like any other sport, shoes are an essential part and important in steering clear of injuries and being able to move quickly from one spot to another without worrying about tripping or falling.

Juggling torches are another dangerous piece of equipment reserved for more advanced jugglers. On one side, there is a handle for jugglers to catch, and the other side is a wick that is often made up of kevlar. The kevlar can be easily lit on fire to perform juggles. Juggling torches are nicely weighted as well in order to make them easier to juggle. Wicks at the tops of torches eventually need to be replaced, which can cost on average about $1.50 for a 5/8th inch piece of kevlar rope, enough to fit at the top of a torch.

A juggling unicycle is not a necessary piece of equipment for jugglers, but can be a fun addition to a juggler's arsenal of tricks. A unicycle is a type of vehicle with only one wheel attached to a seat. Riders then maintain their balance and peddle in order to get around. Jugglers add unicycles in order to make juggling more difficult, as they must balance while also juggling objects in their hands.

Juggling rings are another basic and beginner piece of juggling equipment. Just like bean bags, jugglers use rings as one of the first pieces of equipment they use when just starting out. Juggling rings come in different sizes and colors, however, the bigger the ring, the easier it is to juggle. Rings can also be made up of different material, ranging from wood, plastic, and cloth. In addition, hula hoops can also be used as juggling rings.

Just like the unicycle or the walking globe, slacklines are a great way to add to a juggler's routine. Fastened between two sturdy objects a set distance apart, slacklines are tight pieces of webbing that jugglers walk across and attempt to balance on. Performing on slacklines is a hard task that requires lots of practice and balance. Slacklines can range in different heights off the floor, however, the world record for tallest slackline is 600m. For the average juggler and slackline user, a slackline set up between two nearby trees in a park will serve well in order to practice balancing on a line in the air.

Spinning plates are a difficult object to balance and juggle. Juggling plates, also known as plate spinning, is when a person spins a plate or bowl on top of a poll without them falling off. This prop was really popular in the 1990s. Beginners start out using cheap plastic plates, but slowly work their way up to using expensive dining ware. In addition, speciality silverware for jugglers can also be purchased. These plates and bowls are made up of a special material and are specifically weighted with the idea of juggling them in mind. As a result, specialty juggling plates are easier for jugglers to juggle and use in their act.

Juggling scarves are a cheap and accessible item to juggle for beginner-level jugglers, however, jugglers of all abilities use them. In addition, juggling scarves are one of the first items a person learns to juggle, as their lightweight allows for a slow descent when throwing them up in the air. Scarves allow beginner jugglers to practice the technique of juggling. In addition, they can come in many different sizes, materials, and colors ranging from many different price points.

Walking globes are a fun addition to a juggler's set of tricks. Jugglers learn to balance on a large solid ball, while also being able to walk around on the ball. Jugglers who are able to successfully juggle three or more balls should attempt to add a walking globe to their routine. Being able to balance and juggle is a difficult skill to master that requires the juggler to be well versed in stationary juggling.The ball is usually made up of polyethylene and was invented by Renegade in 1992.