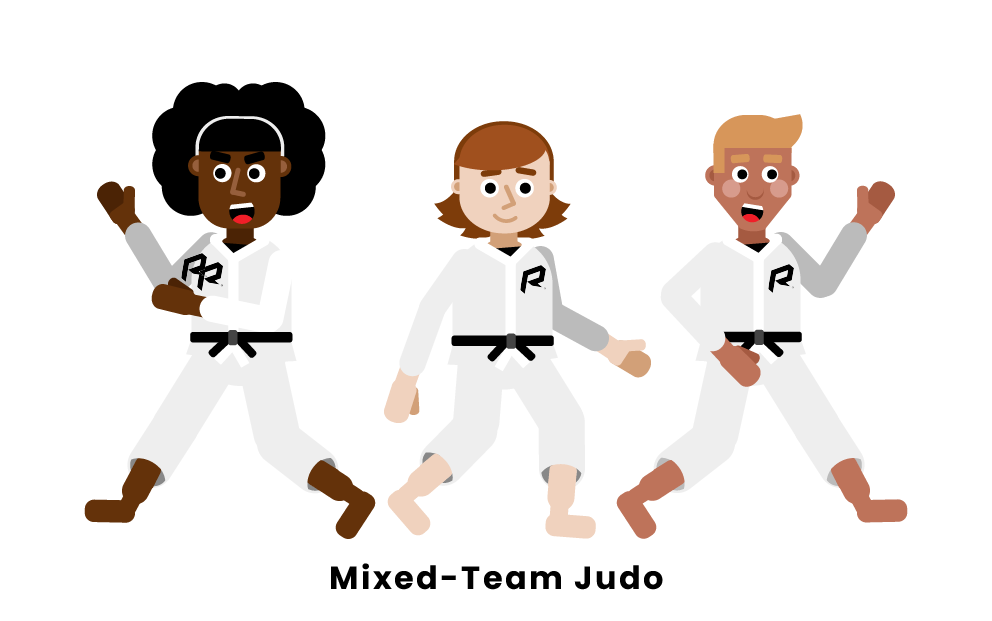 For the most part, Judo is an individual sport. Two judokas compete on a mat and try to score points to beat their opponent. However, Judo has a team component as well. In a team event, you still compete as an individual, but score points for your team. If your team wins more matches than the other team, your team wins. Team Judo is a lot like collegiate or high school wrestling in the United States.

Mixed team Judo means that the team of judokas is made up of both men and women. For the 2020 (now 2021) Olympics, the mixed team will be made up of three men and three women. These six athletes will compete against another team of six athletes. The athletes will compete individually and only against a same sex competitor at the same weightclass. However, as opposed to individual Judo, the judoists will score for their team.

Mixed team Judo will be making its debut at the Tokyo 2020 (now 2021) Olympic games. Three men will compete in the three weight classes, under 73kg, under 90kg and above 90kg. Three women will compete at under 57kg, under 70kg, and over 70kg. All of these athletes will be chosen from the pool of individual competitors, so they all will have already competed at the Olympics. Mixed-team Judo will occur on the final day of Judo competition.

Japan, the country where Judo was invented, is the most successful of all time but is not as much of a powerhouse in recent years. So, it was only appropriate that Tokyo be the location where mixed-team Judo will make its Olympic debut.

For mixed-team Judo at the Olympics, a minimum of twelve teams will compete. Of these twelve teams, four will be seeded. The teams will be set up into a tournament. Each match will be worth a point, with a total of six points available to win. If the teams are tied at three, a random seventh match will be selected. The matches are single elimination until the quarterfinals. Once you get to the quarterfinals the losers will be sent to a second bracket where they will compete for a bronze medal. At the end, a gold, a silver and two bronze medals will be awarded to the four best teams.

The mixed-team Judo competition lends itself to the country with the best all-around Judo. The U.S., for example, has a strong Judo team but is not as well-rounded as other teams. Japan, where Judo was invented, is historically the best Judo team, with 40 Olympic Judo wins.

The key to mixed-team Judo is that the country has to have a mix of talented female and male judoists. Japan has qualified for mixed-team Judo at the 2020 (2021) Olympics with it’s six required judokas. Other countries that have qualified include Brazil, Canada, France, Germany, Israel, Italy, the Netherlands, South Korea, and Russia.

The United States is on the list of countries that are right behind the rest in qualifying for mixed-team Judo in 2021. The U.S. has fulfilled the requirement for women at the above 70kg and below 57kg weight class and the men below 90kg weight class. That is what is so difficult about mixed-team judo; a country has to have talented judoists in six different weight classes.

What does mixed-team mean?

Mixed-team for any sport means that people of both sexes compete in that event. That doesn’t necessarily mean that men and women are directly competing against each other. In some sports, like mixed duets in figure skating, it means that one man and one woman compete together in a routine. In a mixed-team relay, the teams can choose when women will compete and when men will compete. For Judo, mixed-team means that both women and men will score for a team. However, the men will still compete against men and women against women.

When can I watch mixed-team Judo?

Mixed-team Judo has been a part of the Judo world for quite a few years. However, it is making its debut at the Olympic games in 2021 at the Tokyo Olympics. If you want to watch mixed-team Judo at the Olympics, it will be taking place on the final day of Judo competition at the 2020 (2021) games. Mixed team Judo will be a large event, with twelve teams competing. The event promises to be exciting and big for everyone who enjoys Judo.

What team is the best at mixed-team Judo?

Mixed-team Judo is interesting because a country has to be very well-rounded in order to compete and be successful. Teams that have very strong Judo backgrounds but only in one sex won’t be as successful. Japan is currently ranked very highly for mixed-team Judo because they are the inventors of the sport Judo and are historically the best country. Other countries that are predicted to do well at mixed-team Judo are Brazil, Canada, Korea, and Russia, among others.

What are the athlete categories for mixed-team Judo?