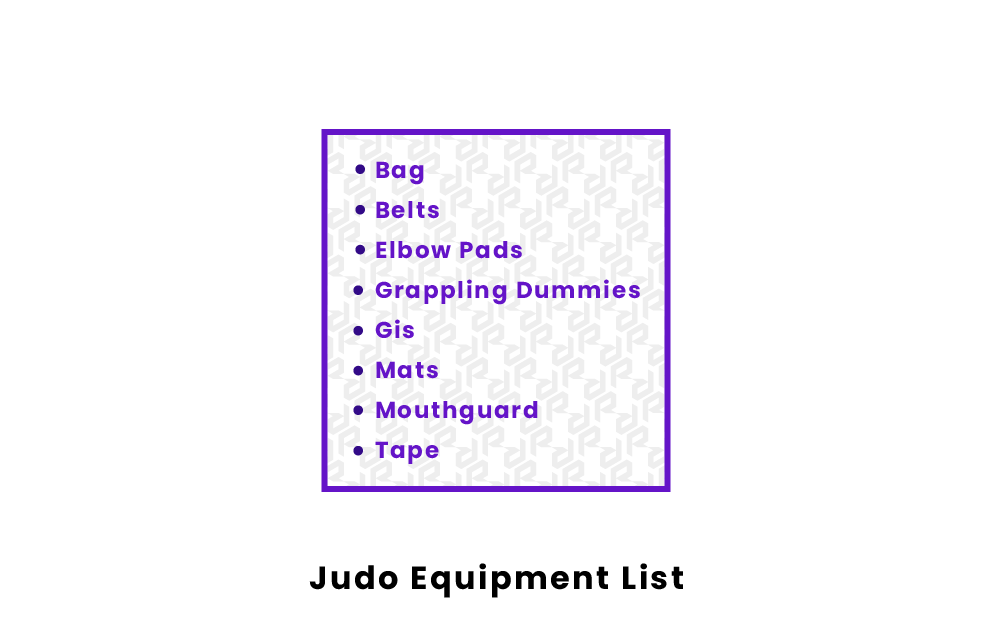 Judo is a competitive combat sport that requires both physical and mental strength. The purpose of Judo training is to instill discipline, both physical and mental, through the art of attack and defense. The Judo player must practice and learn techniques that enable them to lift and toss opponents onto their backs. Once on the ground, the skills required are full control grabs like chokeholds and joint locks, which can submit the opponent to defeat. Judo does not involve any form of striking or the use of weapons of any sort. Judo purely involves two athletes trying to overpower one another through the forces of strength, balance and movement.

While there isn’t as much equipment needed in Judo as other martial arts, Judo does require a variety of equipment for training, as well as for competition. The most recognizable pieces of Judo equipment are surely the fighter’s uniform, known as a gi and the different colored belts. But there are other items of equipment that no Judoka (Judo fighter) should be without. 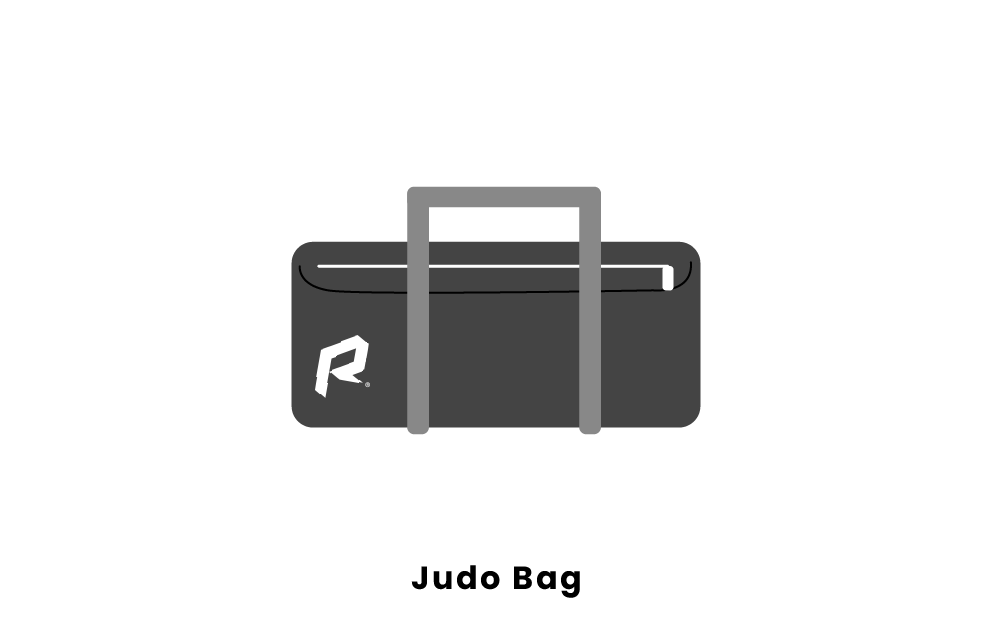 A Judo bag is similar to any other combat sports bag. It is designed to carry any and all of the equipment that a Judo athlete would need to bring with them to the dojo. Most bags are made of a synthetic polymer, such as nylon or polyester. The bags may have a padded shoulder strap for comfort and two handles to be carried at the side. It is important to find a bag that is large enough for all the equipment needed, but not too large where it becomes burdensome.

The majority of bags cost between $30 and $75, with high-end bags costing over $100. Many of the Judo bags available are designed with a convenient breathable fabric to allow the wet, sweaty gear to ventilate. These bags are also designed with multiple separate compartments to keep the wet, dirty gear away from the clean gear. Many of the higher-end models offer waterproof compartments as well. 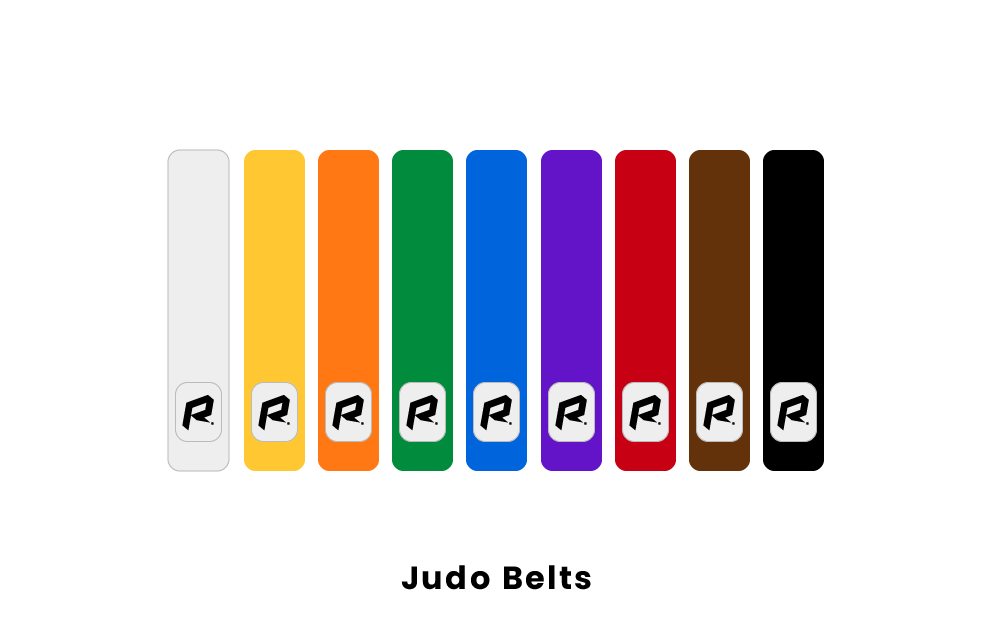 Judo belts are extremely important to the sport because they are an indication of the Judo player’s skill level, which is designated by the color of the belt. Many of the martial arts practiced around the world have a similar belt system; however, Judo is considered the originator of this system. Depending on the country and the association, there are distinct belt color ranks for junior and senior players.

Judo belt holders are assigned into one of two groups, kyu and dan grades. The kyu grades are for beginner-level Judo players. Once the player advances through the six kyu grades, they take a test to proceed further into the dan grades, better known as black belt. Belt colors will be different according to country and Judo club, but the general ranks are:

The goal of most athletes new to Judo is not only to complete the process from white to black belt but, in doing so, improve their inner selves as well. 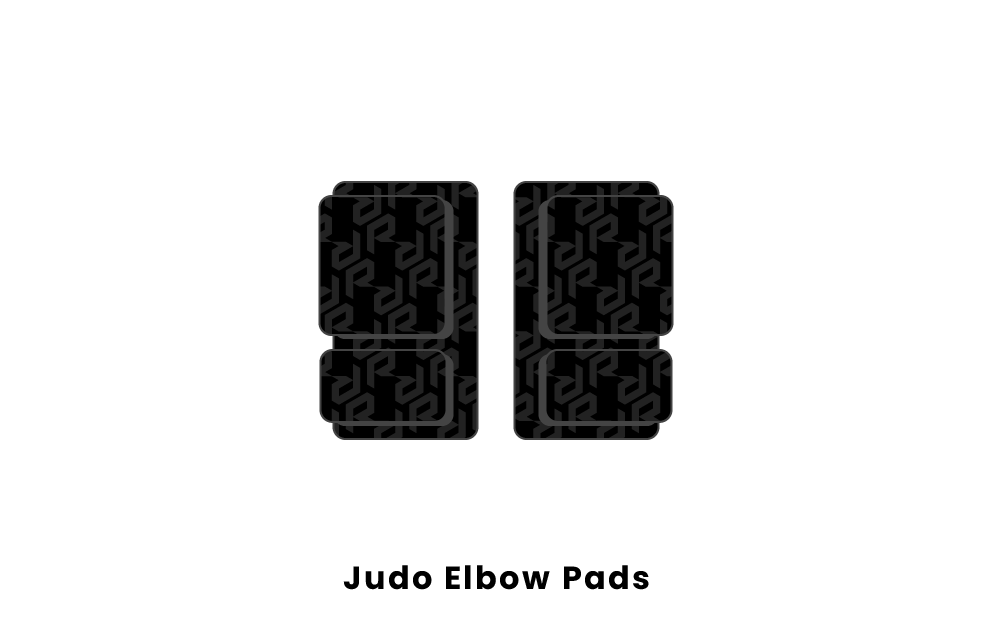 It is not considered mandatory to wear elbow pads when practicing Judo, however, it may be a smart idea. While pads are not allowed in Judo competition, they can help ensure that the Judo player makes it to competition by avoiding injury. There is frequent falling to the ground in Judo and many times this leads to landing on an elbow. It is important to select a tight-fitting pad to make sure of proper protection. These pads are manufactured with a stretchy knitted fabric that include a cushion around the elbow which provide protection from impact. A pair of elbow pads will cost about $25 and are available in sizes small to extra large. 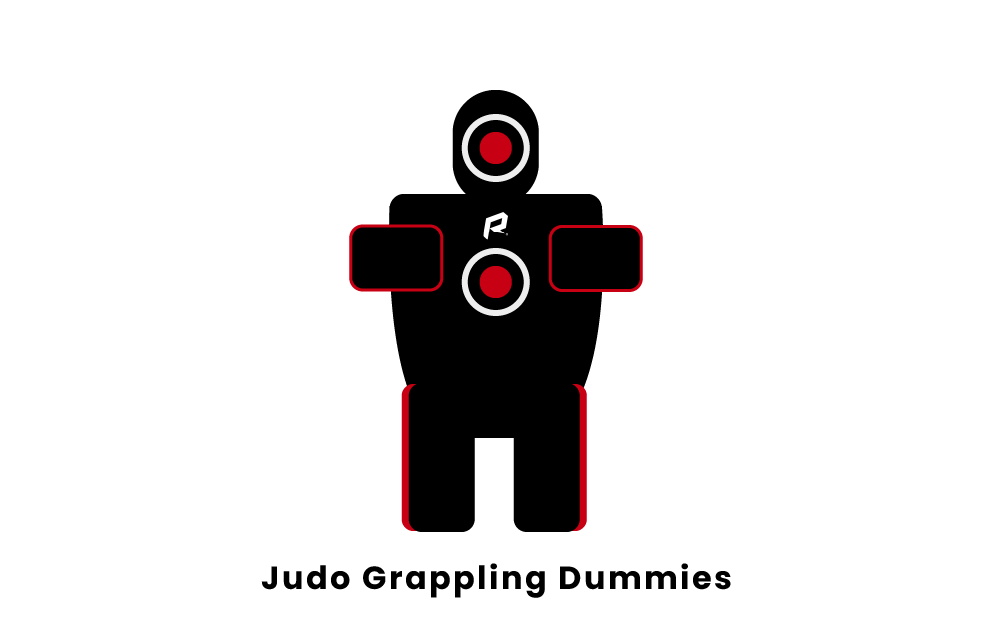 When the Judo player is alone and wants to practice throws and sweeps, the grappling dummy can be a useful substitute for a training partner. A grappling dummy won’t contribute the type of resistance that a human would bring, but it is a useful training aid and the Judoka doesn’t have to worry about injuring the dummy. High quality grappling dummies will cost over $150, with many costing over $500. 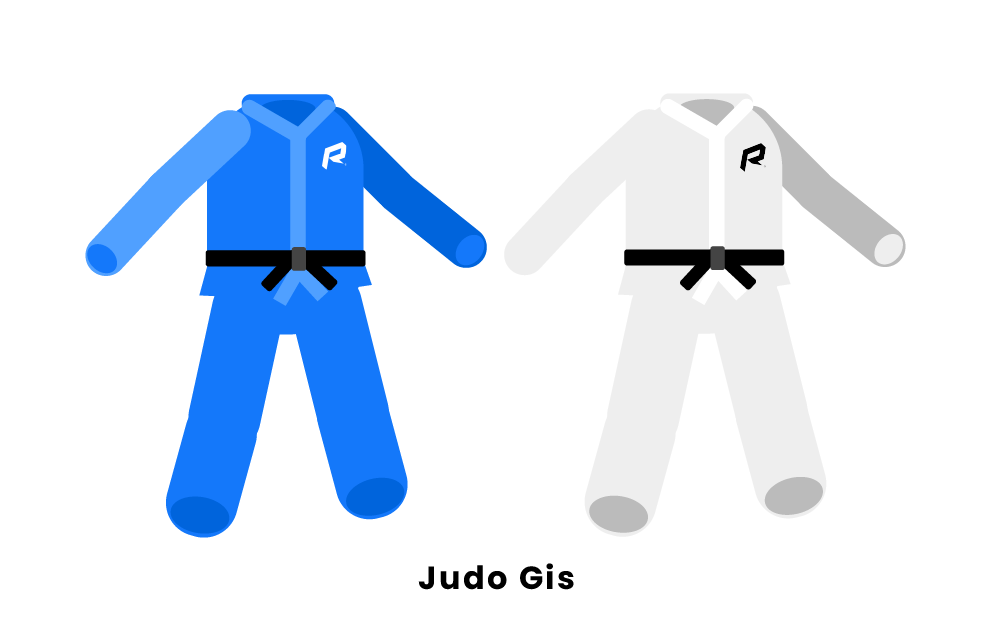 The traditional uniform worn by Judo players during practice and competition is a Japanese kimono known as the Judogi, more often referred to as the gi. While it is common to see athletes practicing all martial arts in their respected uniform, the gi was the first modern martial arts uniform. The gi consists of pants and a tunic, either white or blue, accompanied by an official belt. During competition, there are very strict rules on how this uniform must be worn. The gi needs to fit the athlete perfectly, according to the rules set forth by the International Judo Federation, or the referee can disqualify the competitor. A player wearing a gi that is smaller than the rules allow will have an unfair advantage because it will be harder to grab and lighter to wear. Gis can be purchased for as little as $30 with the most expensive gis costing over $200.

There are a few important features to look for when selecting a gi. Gis are available in cotton, which will keep the athlete cooler than most, or synthetic fabrics, such as polyester, which can be stronger and more resistant to water. Another important feature is the weight of the uniform. Cotton fabric gis will usually be heavier than their synthetic counterparts. Gis made with a lighter cotton will allow for more freedom to move and better airflow than the heavier cotton gis, but will be less durable. Synthetic fabric gis offer both lightweight and great durability but suffer when it comes to airflow. 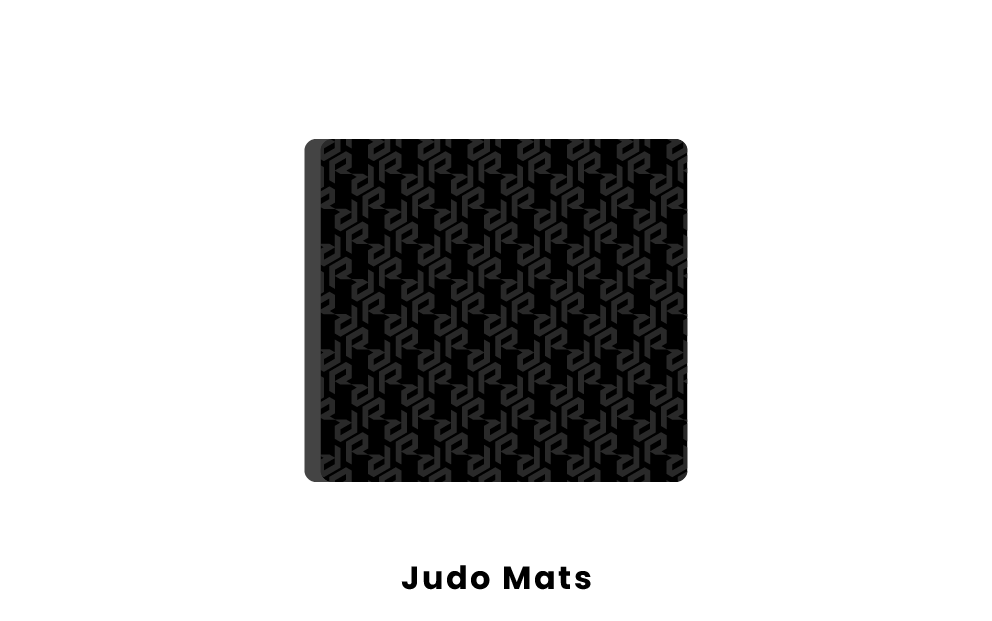 Official Judo competitions take place on tatami mats. Tatami is a flooring material that dates back to 16th century Japan. This flooring has gone through many changes over the years, but modern day tatami is usually made from polystyrene foam that is at least 1.5 inches thick. These mats can be in one piece, rolled or folded when not in use, or in sections that resemble a jigsaw puzzle.

In an official Judo competition, the mat area must be 14 x 14 meters, at a minimum. The matches are contested in an area of at least 8 x 8 meters but no more than 10 x 10. The rest of the provided space serves as a safety zone between playing areas when multiple competitions are taking place at the same time. 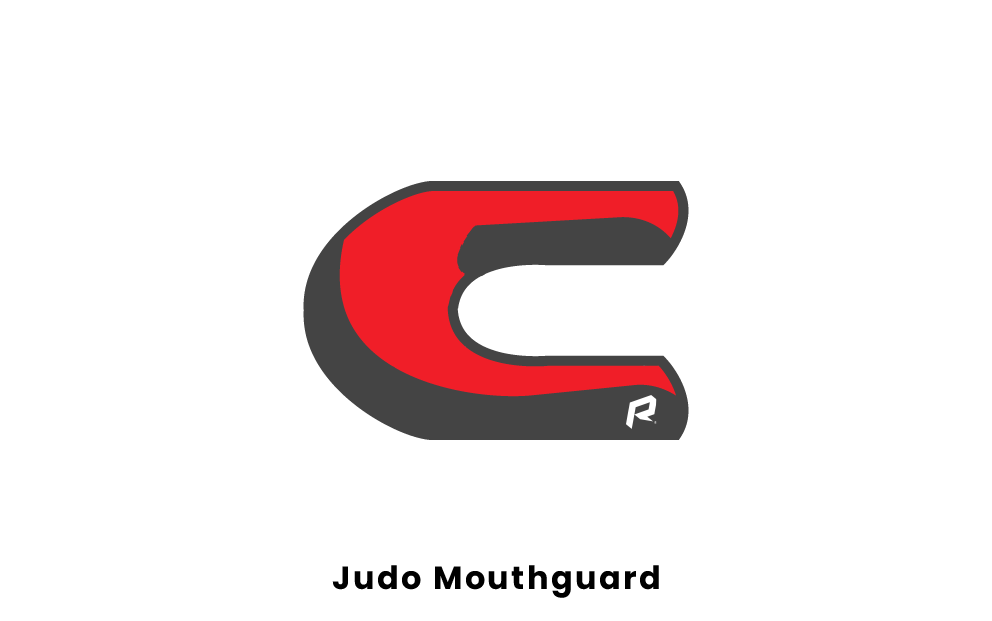 Mouthguards are not mandatory equipment for Judokas, but wearing one may very well end up saving the athlete from unneeded pain and dental bills. There is no striking in Judo, but that does not mean that the teeth and gums are free from injury. With all the grappling in Judo, it is possible for an accidental elbow or head butt could strike a competitor in the mouth and do damage. They are made from plastic polymers and can be purchased for around $15, but there are better fitting models available for more money. 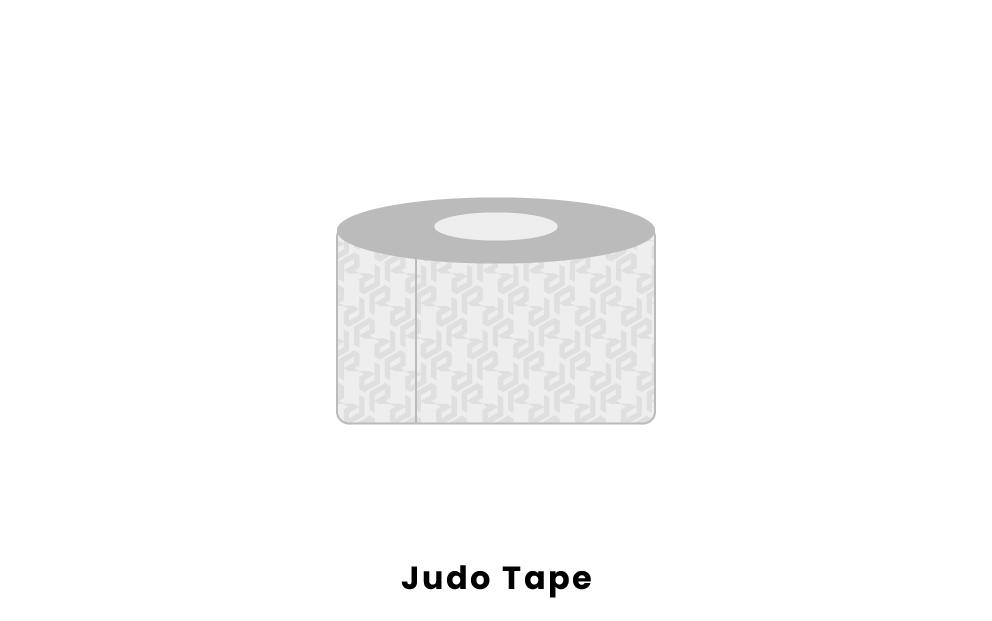 Judo players put a good deal of stress on the joints and extremities which can result in frequent injuries, especially to the hands and ankles. In the interest of preventing potential injuries, many Judokas have their fingers and ankles taped prior to engaging in Judo. Taping produces compression on these areas to reduce swelling. Taping these joints also adds stability which can aid in taking the strain off the tendons. Rolls of tape can be purchased at little expense and, when applied properly, can prove to be a lifesaver for the Judo athlete.