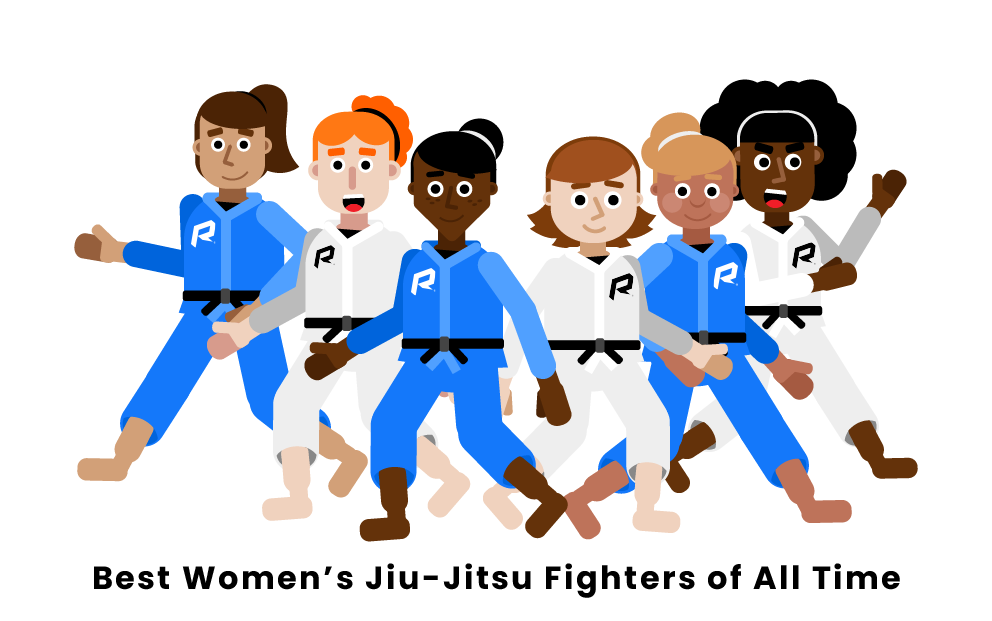 Brazilian jiu-jitsu has seen countless talented women compete since the earliest female divisions in the 80s, to the highly competitive scene we know today. From pioneering legends like Leticia Ribeiro to indomitable younger talent like Bia Mesquita, the top women in jiu-jitsu have brought indispensable skill and passion to the sport. Here are the top six best women’s jiu-jitsu fighters of all time.

Who are the best women’s jiu-jitsu fighters of all time?

Michelle Nicolini is one of the greatest women to ever compete in jiu-jitsu. Raised in Sao Paulo, Brazil, Nicolini started Brazilian jiu-jitsu at 17. Due to her exceptionally dedicated and spirited nature, she earned her blackbelt in only six years. Between her world championships and tournament titles, Nicolini is one of the most decorated champions in women’s jiu-jitsu. She won a whopping eight IBJJF World Championships between 2006 and 2014, as well as three IBJJF Pan-American World Championships between 2008 and 2011. Though a strawweight, many of her most thrilling victories have been against opponents as many as four divisions above her weight class. She retired from Brazilian jiu-jitsu in 2016 to pursue a promising MMA career. In 2014, she became one of the only few women to ever make the IBJFF Hall of Fame.

Known for her exceptional power, Gabi Garcia is one of the most well-known and dominant jiu-jitsu grapplers of all time. Garcia started training in jiu-jitsu after moving to Sao Paulo at 13 years old, soon after which she would become practically unbeatable in tournaments. She is a six-time blackbelt World Champion of the IBJJF, won nine world titles, and 11 Pan-American titles. Garcia initially won the IBJJF 2013 World Championships in both the weighted and absolute competitions, but her titles were stripped in 2014 after it was found she had used performance-enhancing drugs during her campaign. Garcia retired from IBJJF competitions in 2021 after an astounding career, though she will continue to compete in ADCC competitions and pursue her MMA career.

Mackenzie Dern is one of the most talented jiu-jitsu fighters of her era and is still currently competing. The daughter of world-class blackbelt Wellington Dias, Dern was trained from an early age and received her blackbelt in jiu-jitsu at just 19 years old. Though she only competed in jiu-jitsu until her mid-twenties, she had an extremely decorated run in which she won two IBJJF Championships in gi and no-gi categories, two Pan American Championships, and a number of international tournaments. She’s known for taking on opponents well above her weight class. One of her most iconic victories was against jiu-jitsu legend Gabi Garcia, against whom she had an 85-pound weight disadvantage. After becoming the number one female competitor on the scene, Dern left jiu-jitsu in 2018 to pursue an MMA career in the UFC.

Leticia Ribeiro is a decorated veteran of Brazilian jiu-jitsu and a key pioneer to women’s advancement in the sport. Raised in Rio De Janeiro, Ribeiro made her competitive debut in IBJJF colored belt tournaments in 1995, before they even had a women’s division. With her legendary grappling skills, she helped define the women’s division of the sport and took home seven IBJJF titles in the 2000s. Though she retired from competitive jiu-jitsu in 2010, her love for grappling brought her back to the IBJJF World Championship a few times afterward, where she managed thrilling victories in 2011 and 2012. Today, she is perhaps the most renowned coach in women’s jiu-jitsu, developing programs to engage young women in the sport and training new talent, including the highly accomplished Bia Mesquita. She was inducted into the IBJJF Hall of Fame in 2014.

Bia Mesquita (or Beatriz) is a world-class, lightweight Brazilian jiu-jitsu fighter who is arguably the most indomitable in the sport today. She was raised in Brazil and trained by renowned jiu-jitsu fighter Leticia Ribeiro. She has since become Ribeiro’s most successful student yet. Mesquita has won a remarkable record of 10 International Brazilian Jiu-Jitsu Federation World Championships (eight weighted, two absolute) as well as three Pan-American Championships, making her one of the most decorated women’s jiu-jitsu fighters ever. She has also successfully competed in the disciplines of judo and freestyle wrestling and has begun a UFC career as of 2021.

Gezary Matuda is one of the most respected and beloved veterans of Brazilian jiu-jitsu, who is known for her armbar and tendency to thrill. Matuda began as a martial artist in Thai boxing and fell in love with jiu-jitsu in 2004 after her coach suggested trying more ground work. After just a month of training, she entered the competitive scene, where she was an instant success in colored belt competitions. She went on to win the IBJJF World Championship three times in 2013, 2014, and 2016, as well as the IBJJF European Open Championship in 2017 and three IBJJF Pan American Championships between 2015 and 2018. Today, she teaches jiu-jitsu based fitness and has a wide following on social media.

Who is the greatest women’s jiu-jitsu fighter of all time?

Many fighters have brought invaluable skill and passion to the game, from the pioneers like Leticia Ribeiro to newer talents like Bia Mesquita. Michelle Nicolini, however, is currently widely regarded as the best fighter of all time for the innovation she brought to the sport and impressive world champion title run. However, Bia Mesquita, who has broken the record for most world championship titles, is currently competing and has a promising chance of being considered the greatest of all time when her career is over.

Who has the most women’s World Jiu-Jitsu Championship titles all time?

Who is the greatest women’s Jiu-Jitsu fighter to ever fight in the UFC?

Mackenzie Dern is widely regarded as the greatest woman from jiu-jitsu to have made a successful career for herself in the UFC. Having left jiu-jitsu as the number one competitor in the world and as a young woman with plenty of years ahead of her, Dern has proven herself an extraordinary UFC fighter. She made her debut in March of 2018 and had posted an impressive record to start her career.