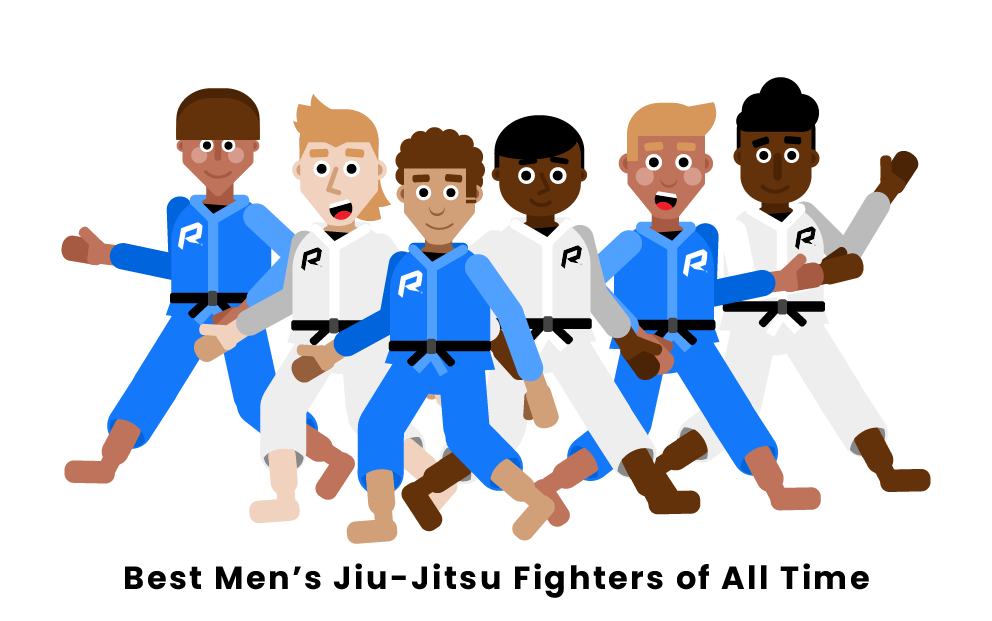 Brazilian Jiu-Jitsu, often known simply as jiu-jitsu, is a martial art that focuses on individual competitors grappling with one another until the winner can force their opponent to submit. A fighter must utilize a superior amount of strength, grip, and leverage to win such matches. Read on to learn about the six best men’s jiu-jitsu fighters of all time.

Who are the best men’s jiu-jitsu fighters of all time?

Marcus Almeida, aka “Buchecha,” is the reigning king of Brazilian jiu-jitsu. Under the expert tutelage of BJJ World Champion Rodrigo Cavaca, Almeida began his illustrious career by winning five Brazilian National Championships from 2007 to 2010. In 2009, he won his first IBJJF World Championship and went on to win sequential double gold medals every year from 2012 to 2019, with only two exceptions made for instances of injury. During his ten years competing at the international level, Almeida set the all-time record for most IBJJF Championships, winning his thirteenth in his final year competing. Thanks to his impeccable record, Marcus Almeida is undoubtedly the best men’s jiu-jitsu fighter of all time.

In terms of wins alone, Bruno Malfacine is one of the greatest grapplers in Brazilian jiu-jitsu history. After making it through the ranks of the Brazilian Nationals, he won his first IBJJF World Championship in 2007 and continued to win gold for the next eleven years in his rooster weight class (under 126.5lbs/57kg), with the exception of 2008 and 2013. Due to his extreme success, Malfacine was inducted into the International Brazilian Jiu-Jitsu Federation Hall of Fame and is now widely considered the best rooster weight fighter of all time in the sport of jiu-jitsu.

Londrina-born Ruben “Cobrinha'' Charles Maciel is among the best competitors in the history of Brazilian jiu-jitsu. After a five-year training period starting in 2000, Charles obtained his blackbelt. Every year since, he has medaled in every IBJJF World Championship in which he has competed and thus won ten gold medals in his weight class. After obtaining silver in the first two, Charles has also won a total of three ADCC Submission Wrestling World Championships in 2013, 2015, and 2017. In early 2022, he was inducted into the ADCC Hall of Fame and cemented his place as arguably the best featherweight grappler in jiu-jitsu history.

Besides being a member of the infamous Gracie family, Roger Gracie is known as one of the greatest heavyweight grapplers in the history of jiu-jitsu. After receiving a black belt from his family’s academy, Gracie began competing internationally in the Super Heavyweight class (over 100.5kg/222 lbs). From 2004 to 2010, he won a total of ten IBJJF World Championships and received silver in five other instances. Over this period, he became famous worldwide for his accuracy as a high-ranking submission specialist. In 2021, he became the first official inductee in the ADCC Hall of Fame and retired with his title as one of the all-time greatest secured.

Formiga native Marcelo Garcia is the greatest middleweight (66-76 kg) grappler in Brazilian jiu-jitsu history. After training under world-champion Fabio Gurgel of Team Alliance, Garcia began competing internationally in 2003 at the ADCC World Championship. He ultimately won gold in his weight category and repeated the feat in 2005, 2007, and 2011. Making his name as a highly technical fighter, Garcia also won five IBJJF championships between 2004 and 2011 in his own division as well as in the absolute division. After a brief stint fighting in MMA and opening up his own BJJ academies, Garcia was announced in 2021 as the third inductee to the ADCC Hall of Fame.

Leandro Lo Pereira do Nascimento, more popularly known as simply Leandro Lo, is one of the greatest jiu-jitsu athletes of all time. Besides his spectacular record of six IBJJF Pans Championships from 2012-2018 and seven IBJJF World Championships from 2012-2019, Lo is most famous for competing across five weight classes (light, middle, medium-heavy, heavy, and open weight). With his IBJJF World win in 2019, he even broke the record for most world titles in different weight classes, a feat that had been held for twenty years by his rival’s brother, Saulo Ribeiro. Thanks to his renowned international performances across many weight classes, Leandro Lo is clearly one of the best men’s jiu-jitsu fighters of all time.

Romulo Barral is a retired Brazilian jiu-jitsu fighter who started practicing martial arts at only eight years old. He started training in jiu-jitsu at 15 years old with the intention of one day competing in mixed martial arts competitions. He ended up focusing on Brazilian jiu-jitsu and saw enormous success during the late 2000s and early 2010s. After winning the Brazilian National Championship in back to back years in 2006-2007, he went on five IBJJF World Championships between 2007 and 2014. With a career record of 107 wins and only 41 losses, he cemented his place as one of the best jiu-jitsu fighters of all time.

Saulo Ribeiro is a sixth-degree Brazilian jiu-jitsu blackbelt, so it should come as no surprise that he is considered one of the greatest jiu-jitsu grapplers of all time. Ribeiro was an understudy to Royler Gracie of the prestigious Gracie family. Ribeiro earned the title of world champion in four weight classes during his career (a world record) and also achieved the status of ADCC champion twice. All in all, Ribeiro is a five-time world champion, to go along with two Pan American Championship titles and seven World Masters and Seniors wins during the later stage of his career. On account of his success and contributions to the sport, Ribeiro was named a member of the inaugural ADCC Hall of Fame Class in 2022.

Who is the greatest men’s jiu-jitsu fighter of all time?

The greatest men’s jiu-jitsu fighter of all time is Marcus Almeida, also known by his coach’s nickname “Buchecha.” In 2007, he catapulted to national fame in his native Brazil for winning the national championship, a feat he continued for four years. With the exceptions of a personal injury and a merciful forfeit due to his opponent’s injury, he followed up his national success at the IBJJF Championship. Between then and 2019, Almeida won a record thirteen world championship titles.

Who has the most men’s World Jiu-Jitsu Championship titles all time?

The all-time record for most men’s World Jiu-Jitsu Championship titles is Marcus Almeida. After a respectable silver and bronze showing the previous year, he won his first two gold medals at the 2012 IBJJF Championship for both the +100Kg and Absolute classes. With the exceptions of injury in 2015 and 2018, Almeida won first place in both classes until his retirement from international competition in 2020, finishing with a record total of 13 World Championship titles.

Who is the greatest men’s jiu-jitsu fighter to ever fight in the UFC?

The greatest men’s jiu-jitsu fighter to ever fight in the UFC is Royce Gracie. Despite never taking part in traditional competitions thrown by the IBJJF, Royce was trained as part of the prestigious Gracie family. Between 1993 and 1994, Gracie rose to fame for winning UFC 1, UFC 2, and UFC 4, before ending UFC 5 in a draw. Thanks to his success on the UFC stage, Royce Gracie is credited with popularizing Gracie Jiu-Jitsu and its incorporation into MMA.