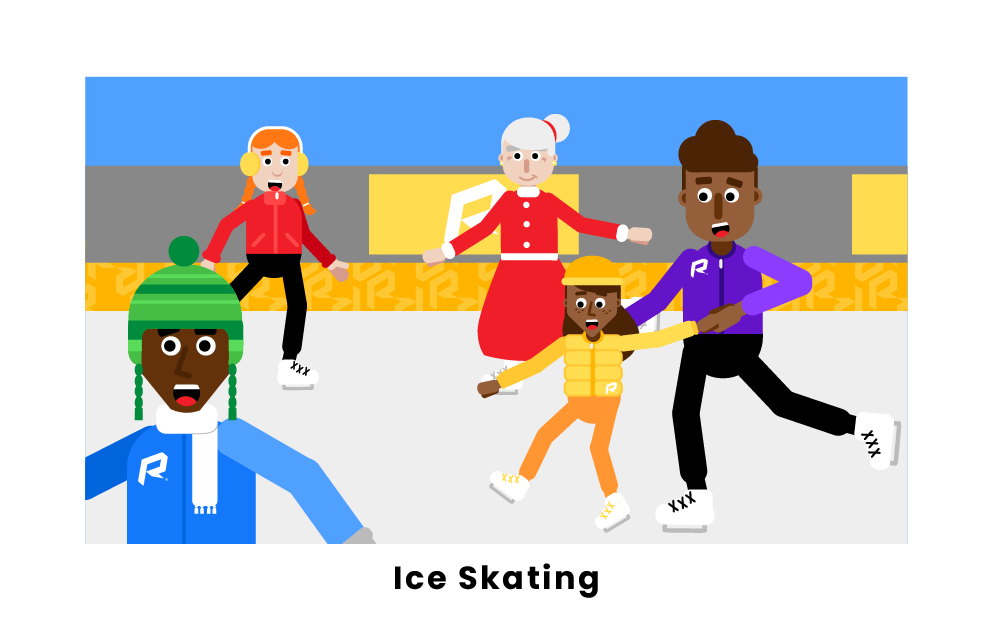 As inferred by the name of the activity, ice skating takes place on an ice playing surface. Ice skating is the recreation and sport of gliding around an ice surface on blades attached to the bottom of a shoe-life skate product. Ice skating rinks are often found to be both indoors and outdoors. It's a fun way to spend a day with friends and family. Ice skating is also the key component of sports such as ice hockey, speed skating, and figure skating as well.

Ice skating was established in early 1000 BCE in Scandinavia. Initially, the first skates were made from a variety of animals, such as shank and rib bones of oxen and deer. However, as time progressed, the metal runner was introduced by the Dutch. In 1950 in the United States, the steel blade attaching to the bottom of the skate itself was invented. The transformation of ice skating from a seasonal pastime to a popular sport and form of entertainment occurred when refrigerated ice rinks were constructed in London (1876) and at Madison Square Garden (1879).

As mentioned before, ice skating is considered to be its own type of recreation but also plays a key role in sports like ice hockey. Ice skating as a form of recreation and entertainment, however, has no structured rules or gameplay. Skaters must always be safe and keep their head up while gliding around the ice surface because the rink can sometimes be busy with families and friend groups.

There's no real rules or regulations to ice skating. However, like any sport or recreational activity that one takes part in; it is always important that one stays safe and be aware of the rules and their surroundings.

A coach must have a great deal of knowledge on ice skating. More importantly, however, a coach must know how to treat and respect their own skaters. The great ice skating coaches know what it takes to help their skater's reach the next level. These coaches must also know The 4 coaches below are a few of the premier ice skating coaches:

The great thing about ice skating is the fact that professionals and children work on the same drills while practicing. There are hundreds of drills that each help a skater or duo can practice. Common drills include different variations of how to efficiently stop, spin, or jump. Other drills often include how an individual or duo will pull off a certain routine.

Because it includes speed skating, figure skating, and ice hockey, ice skating is arguably the most prominent activity that occurs throughout a Winter Olympic Games. Professional skaters and players from all over the world travel to one country to compete for gold.

Each sport has its go-to brands that provide the necessary equipment and accessories to both fans and to players from all different levels. Some of the most popular ice skating brands include:

Ice Skating youth organizations exist in order for skaters of any level to have the chance to train and improve their skating techniques and skills with professionals. A few highly regarded youth organizations and locations in the tri-state area to learn how to skate are below:

There are not so many leagues associated with ice skating. There are more teams and youth organizations and locations (as listed above). Below are some of the most highly recognized and touted ice skating teams:

From the Olympics to World Championships, there are numerous ice skating events each year which showcase the most-talented skaters worldwide. Each skater has the chance to display their talent in front of large crowds and have an opportunity to win world/national championships.

Ice skating books are often fiction, nonfiction, or novels on how to train made for skaters to help them improve their craft. Some of the stories are based on real-life events. Other books are made up stories meant to be fun and enjoyable for a reader. Some of the more popular hockey books include:

There are many different ice skating websites that each have its own special purpose. There are sites made for purchasing equipment, sites to explore rankings, sites to see an individual skater's performance. Some of these websites include:

Ice skating is a recreational activity that almost any individual can take part in both outdoors and indoors. One must know how to ice skate to be involved and compete in a sport like ice hockey, figure skating, or speed skating.

Learning how to ice skate is a process. However, with the proper training and hard work, an individual will be able to improve and keep mastering new skills.

How much is it to ice skate?

A pair of ice skates ranges anywhere from $100 to $1000 depending on the brand and on if one is a beginner or professional. However, if an individual simply wants to go ice skating for fun, the cost of renting a pair of skates and taking the ice for however long they wish can range from $10 to $20.