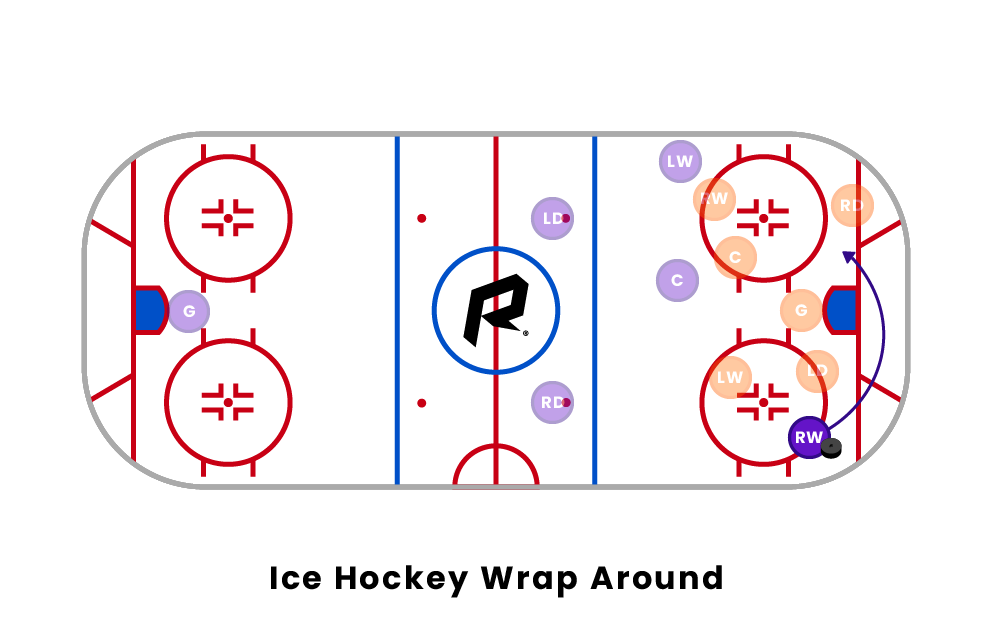 A wrap around is a type of shot in hockey that features a player starting on one side of the net, quickly going behind the net, and then wrapping the puck around the other side’s post to slip the puck into the net. Unlike many scoring opportunities in the game, this strategy is dependent on timing rather than accuracy. To score a wrap around, a player must sprint behind the net from one post to the other before the goalie can adjust. If the skater successfully gets around the net before the goalie can switch posts, they can just slip the puck into the net for a goal.

Along with the goalie in the net, the offensive player must also take account of the defense. If a defensive player notices the wrap around attempt and reaches the player before they get to the other side of the net, they can lay a hit on the player, going full speed in the opposite direction. These hits make a wrap around a high-risk, high-reward play.

How To Score On A Wrap Around

To start a wrap around, you want to skate with the puck towards the goalie on one side of the net. The key to a good wrap around attempt is making the goalie think you are going to shoot straight on net. Once the goalie has committed to facing the puck, you then quickly sprint behind the net as fast as possible towards the other side of the net. Next, make a quick move with the puck on your stick toward the opposite post and slip it into the net.

Are the number of wrap-around goals in hockey increasing?

The size of the net has a great impact on how many goals are scored on wrap arounds. When the NHL made the net narrower and more shallow before the 2013-14 season, wrap around goals increased greatly. This change occurred despite less ice to cover for the goalies because the shallowness of the net makes it easier for the offensive player to cross behind the net quickly.

What percentage of goals in the NHL are scored from wrap arounds?

Due to the skill and speed needed to execute a wrap around, these types of goals do not account for much of the scoring pool in the NHL. Only about one percent of goals are scored using wrap arounds today. This number pales in comparison to wrist shots, which account for 49 percent of the goals, and tip-ins, snapshots, slapshots, and deflections, which individually account for around ten percent each.

How can goalies protect from wrap-around goals?

Timing is essential for goalies to stop wrap-around goals from occurring. When a goalie defends a wrap-around attempt, there are also different ways offensive players can take advantage of the situation. The player can pass the puck for a quick one-timer, or if the goalie commits too hard to one post, the skater can try to slip the puck towards the far post and score that way. This variety of options means the goalie must be very aware of the offenses’ movements to successfully prevent a wrap around goal.

Pages Related to Hockey Wrap Around