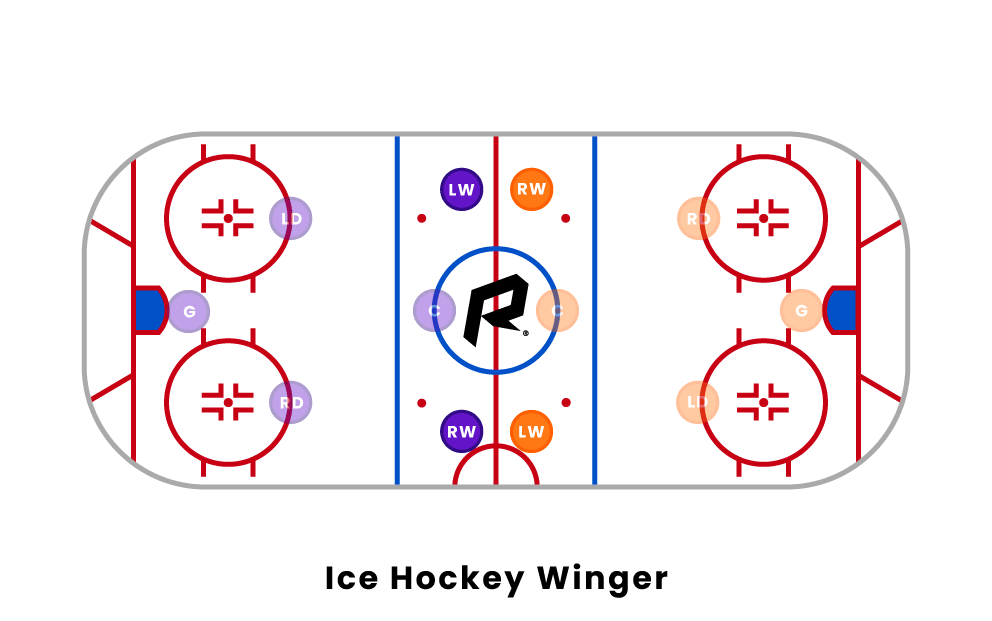 Wingers, also known as wings, are forwards who typically play on the sides of the rink. Wingers are typically the main scorers and lead the team in shots on goal. Wingers practice shooting more than any other position in hockey. There are typically eight wingers on the team roster.

There are two wingers on a line in hockey. They are named for the side of the ice they play on: right wing and left wing. They share similar roles and responsibilities on both ends of the ice but have a few differences when it comes to handedness and strategy.

Left wingers typically play along the left side of the rink. It also helps for a left wing to shoot left-handed, as it makes it easier to play the puck on the boards and distribute it to the middle of the ice. However, right-handed players also sometimes play left wing, as it is easier to take one-timers and create better shooting angles in the offensive zone.

Right wingers have much of the same responsibilities as the left wingers, except they play primarily on the right side of the rink. As opposed to left wingers, it helps to have a right-handed shot when playing right wing on breakouts and when skating the puck up ice against defensemen. However, some left-handed players play right wing because it is easier to take one-timers and create better shooting angles in the offensive zone.

Top NHL Wingers of All time

The following lists some of the top wingers in the National Hockey League:

What does a winger do in hockey?

A winger is a forward position in hockey who plays near the boards on the left or right-hand sides of the ice. Wingers are responsible for making shots on goal in the offensive zone and covering the point and high slot in the defensive zone.

How do you break out as a winger?

As a winger, you should break out on whatever side you are playing on. A winger will typically try to keep their feet moving up ice and open up for a breakout pass from their teammate. The wings should be supported by the center in case passing lanes are cut off up the boards. Making sure to keep the puck out of the middle of the ice will ensure that a breakout doesn’t result in a turnover.

How do you play wing in hockey?

To play the winger position in hockey, players should have excellent skating skills and offensive awareness. The left and right wings are positioned on their respective sides. On offense, wingers on the wing should focus on creating offensive opportunities by setting up their teammates and taking quick shots on goal. On defense, wingers will typically be covering the opposing defensemen in the defensive zone.