Who are the Boston Bruins' Biggest NHL Rivals? 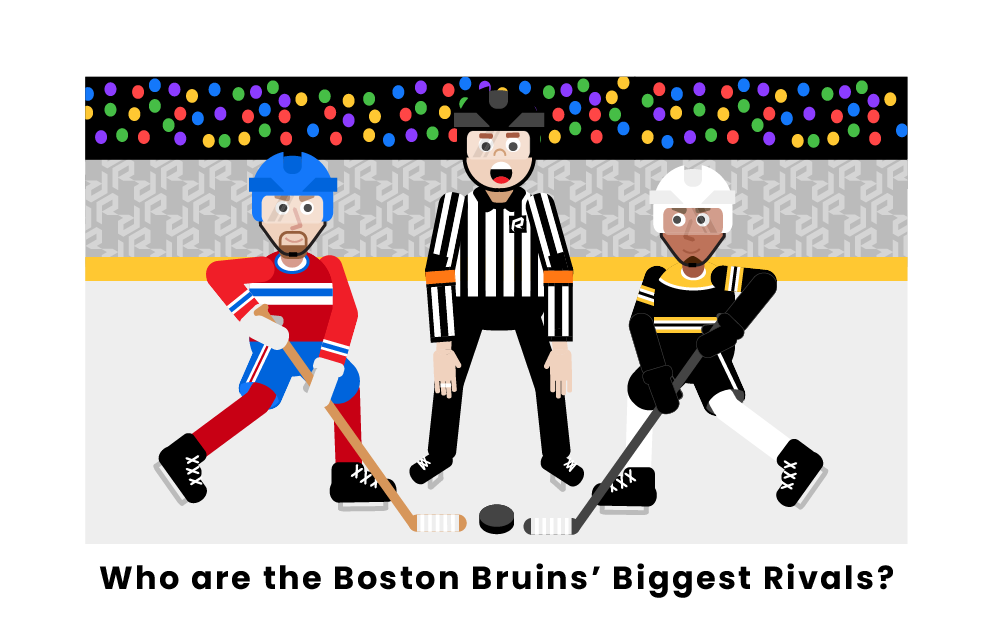 The Boston Bruins' biggest rivals are the Montreal Canadiens, Toronto Maple Leafs, and the Buffalo Sabres. The Boston Bruins are one of the NHL's Original Six teams and are the oldest American NHL team as they were founded in 1924. As a result, the Bruins have accumulated fierce rivalries due to their proximity to other teams and extensive success.

The Boston Bruins and Montreal Canadians have been playing each other since 1924; however, the rivalry didn't really pick up steam until the 1970s when both clubs were league juggernauts. In that decade, the Bruins won two Stanley Cups but could never beat the Canadiens in a playoff series. In fact, Boston matched up against Montreal in the playoffs 18 times between 1946-87 and never won the series. Thus, the frustration from Boston fans is what truly started the rivalry. Most hockey fans believe that this rivalry is the best rivalry in all of hockey. One of the greatest moments of the rivalry was in 1979, in which the Bruins held a 4-3 lead late in Game 7 of the Stanley Cup Playoff Semifinals. On the verge of finally defeating their rival in the playoffs, Boston inexplicably took a too many men on the ice penalty. Montreal would tie the game with 2:34 to go and eventually win the series in the ensuing overtime.

The Toronto Maple Leafs are an Original Six team alongside the Bruins. In fact, the Bruins lost to the Maple Leafs 5-3 in their second game ever back in 1924. However, the rivalry has gotten significantly more intense since 2009, when Boston traded away its leading goal scorer in Phil Kessel to Toronto. The Bruins capitalized on the return by selecting Tyler Seguin and Dougie Hamilton, who both became All-Stars. While Montreal dominated Boston for over a 40-year span, the Bruins have beaten the Maple Leafs in the postseason six times in a row between 1969-2021. In 2013, the Bruins famously came back in Game 7 of the Eastern Conference Quarterfinals against the Leafs. Boston trailed 4-1 with under 10:00 to play in the game before scoring three unanswered goals and winning in overtime. The Bruins also came back in 2018 in Game 7 of the Eastern Conference Quarterfinals against the Leafs, but it was only a one-goal deficit.

The Boston Bruins and Buffalo Sabres have been rivals since they were in the old Adams Division in 1973. Up until 2018, the Sabres have had more fights (233) against the Bruins than any other team it has played in its franchise history. The Bruins first faced the Sabres in the postseason in 1982 and won their first five playoff series against Buffalo; however, the Sabres finally broke through in 1993 when they swept the Bruins in the opening round of the playoffs. Another famous moment came in 2010, in which former Sabre Miroslav Satan scored an overtime game-winner in Game 4 of the Eastern Conference Quarterfinals to give Boston a 3-1 series lead. He would go on to score the game-winner in Game 6 to complete a series win against the favored Sabres.

Are the Boston Bruins and Montreal Canadiens rivals?

The Boston Bruins and Montreal Canadiens have been playing against each other since 1924 and have been major rivals ever since the 1970s. It's considered one of the best rivalries in all of hockey, as both fan bases have bad blood towards each other. Boston fans like to embrace grittiness, while Canadiens love finesse. Both do not like the other's style. Currently, the Bruins and Canadiens play in the Atlantic Division of the NHL's Eastern Conference.

Who is the Boston Bruins' biggest rival?

The Montreal Canadiens are considered the Boston Bruins' most hated rival. It's derived from the success Montreal had over them in a 40-year span from the 1940s to 1980s. The rivalry has featured some of hockey's greatest players going head-to-head, like Bobby Orr and Jean Beliveau squaring off in the 1969 Semifinals, or the classic goalie duel between Carey Price vs. Tim Thomas in the 2011 Eastern Conference Quarterfinals.

Why are the Boston Bruins and Toronto Maple Leafs rivals?

The Boston Bruins and Toronto Maple Leafs are both Original Six franchises, so their history spans longer than most other matchups in NHL history. Their rivalry got much better in the 2010s, in which the Bruins beat the Leafs three times in the playoffs. Each playoff series victory took place in Quarterfinal Game 7s in Boston. The decade featured many talented players such as David Pastrnak and Auston Matthews.

Pages Related to Who are the Boston Bruins' Biggest NHL Rivals?