Which NHL Teams Have Never Won A Stanley Cup? 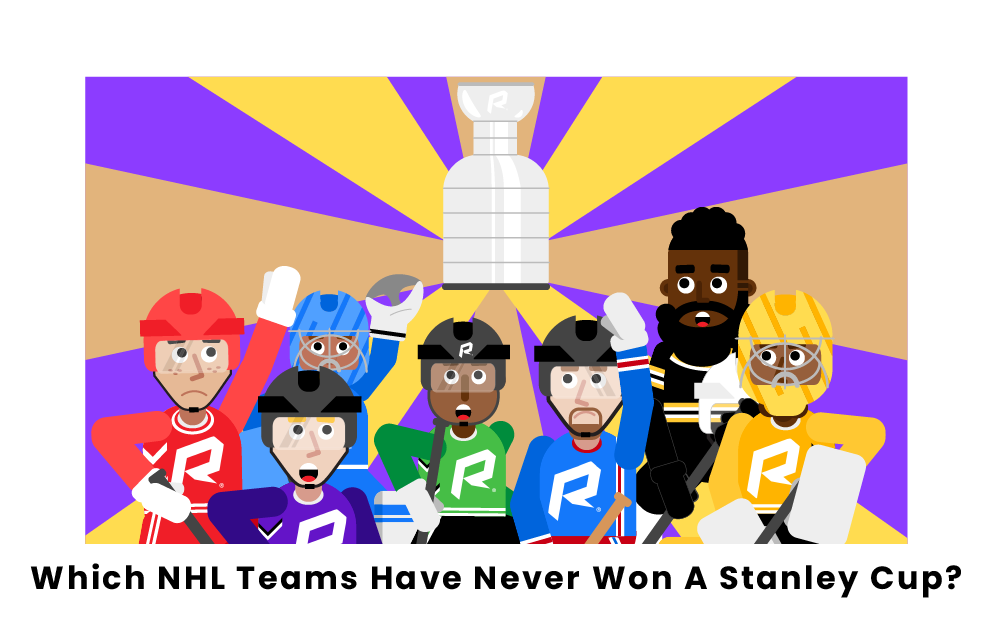 Each year when hockey season arrives, the 32 teams in the National Hockey League (NHL) battle it out for a chance to win the coveted NHL Championship trophy, the Stanley Cup. But how many of the NHL’s 32 teams have never won the trophy? Here, we look at the surprisingly-long list of teams that have never won the Stanley Cup, which is sometimes called “the hardest trophy to win in professional sports.”

As of 2022, there are a total of 11 teams in the NHL which have no Stanley Cup victories. The teams, listed with their playoffs and Stanley Cup Finals appearances, are:

The Wild joined the NHL in the year 2000. They reached the Western Conference finals in 2003 but lost to the Anaheim Mighty Ducks. Since 2003, Minnesota has returned to the playoffs multiple times but has not advanced to the Stanley Cup Finals.

Created in 1972 as the Winnipeg Jets, Arizona reached the playoffs twice in the mid-1980s and was eliminated both times in the second round. After moving to Arizona, the team reached the playoffs four consecutive times but was eliminated in the first round each time. In 2011-2012, they won their first division title in franchise history, as well as winning both the first and second rounds of the playoffs, only to be eliminated in the Western Conference Finals by the Los Angeles Kings.

The Buffalo Sabres joined the league in 1970, and since then, have made it to the Stanley Cup Finals twice. In 1973, they were defeated in the finals by the defending champions, the Philadelphia Flyers. In 1999, Buffalo was defeated in the finals by the Dallas Stars, thanks to a controversial triple-overtime goal by Dallas’ Brett Hull, which Buffalo fans contended was illegal.

Entering the NHL in 1993, the Florida Panthers have reached the Stanley Cup Finals once, in 1996. Led by star goalie John Vanbiesbrouck, the team upset two higher-seeded teams in the Eastern Conference to reach the Stanley Cup Finals. However, in the end, Florida was swept in the championship series by the Colorado Avalanche, and since 1996, the team has failed to come anywhere close to the Stanley Cup.

Peaking in the mid-to-late 2000s, the Ottawa Senators also have one Stanley Cup appearance, which came in 2006. That year, Ottawa easily beat the Pittsburgh Penguins, the New Jersey Devils, and the Buffalo Sabres to advance to the finals, where they were ultimately defeated by the Anaheim Ducks in five games. Since then, Ottawa has floundered slightly as a team, reaching the playoffs a few times but never passing the second round until 2016-2017, when they reached the Eastern Conference Finals, only to lose to the Pittsburgh Penguins in a double-overtime game seven.

The Vancouver Canucks, founded in 1970, have appeared in the Stanley Cup Finals three times. In 1981-1982, the Canucks overcame a losing record to face the New York Islanders but were swept in four games. In 1994, facing the heavily-favored New York Rangers, Vancouver surprisingly managed to hold the series to seven games, though they lost the deciding match 3-2. The Canucks’ final Stanley Cup appearance thus far came in 2010-2011, a year where the team managed to secure the best record in the NHL season. Unfortunately, Vancouver fell yet again, losing the Stanley Cup to the Boston Bruins in seven games.

Created in 1998, the Predators achieved their first playoff series win in 2010-2011, defeating the Anaheim Ducks, but then they lost the following round. In 2016-2017, Nashville reached its first Stanley Cup Finals but lost a six-game series to the Pittsburgh Penguins. Since then, the Predators have advanced to the playoffs frequently but have not made it past the second round.

Founded in 1991, the San Jose Sharks have reached the postseason numerous times but have won only one Western Conference Championship in 2016, advancing to the Stanley Cup Finals. That year, San Jose lost to the Pittsburgh Penguins in six games. Since then, the Sharks have advanced to the playoffs three more times and advanced to the Western Conference Finals again in 2018-2019, only to lose to the St. Louis Blues.

One of the youngest NHL teams, the Vegas Golden Knights, were founded in 2017, and though they have not won a Stanley Cup, they have come extremely close for such a young team. Despite low expectations, the Golden Knights excelled in their very first season, winning the Western Conference to advance to the 2018 Stanley Cup Finals. Unfortunately, they lost those finals to the Washington Capitals in five games.

The main reason the Seattle Kraken have not yet won a Stanley Cup is that they only joined the league in the 2021 season. First approved as an expansion team in 2020, Seattle was given the ability to draft players in 2021 and is currently the newest NHL team. Only time will tell if the Kraken will become a Stanley Cup contender in the future.

Which NHL teams have never won the Stanley Cup?

There are eleven teams in the NHL that have never won the Stanley Cup: the Minnesota Wild, the Arizona Coyotes, the Buffalo Sabres, the Columbus Blue Jackets, the Florida Panthers, the Ottawa Senators, the Vancouver Canucks, the Nashville Predators, the San Jose Sharks, the Vegas Golden Knights, and the Seattle Kraken.

Which NHL team is the oldest team to never win a Stanley Cup?

The two oldest teams in the NHL to never win a Stanley Cup are the Buffalo Sabres and the Vancouver Canucks. Both teams were founded in 1970. Buffalo has advanced to the Stanley Cup Finals twice, while Vancouver has reached the Finals three times.

Which NHL team has won the most Stanley Cups?

The Montreal Canadiens are the NHL team with the most Stanley Cup victories in the history of the league. Since 1915, Montreal has won 24 Stanley Cup titles. They are followed by the Toronto Maple Leafs, with 13 wins, and the Detroit Red Wings, with 11 wins.

Pages Related to Which NHL Teams Have Never Won A Stanley Cup?