Where Is Ice Hockey Most Popular? 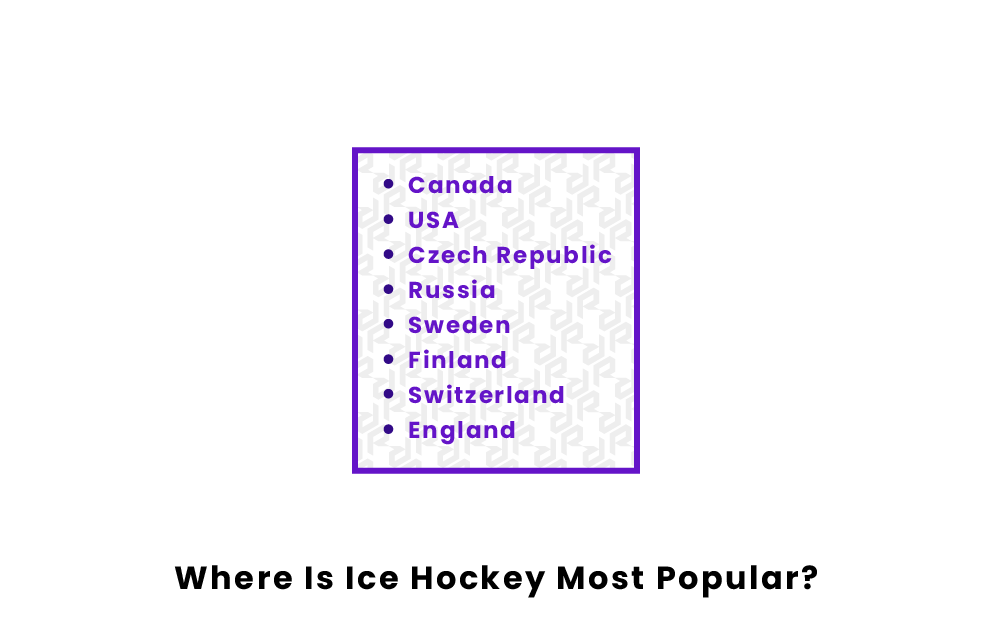 Since its humble modern origins in 19th century Canada, ice hockey has boomed across many countries, particularly in North America and Europe. This growing phenomenon is even now considered one of the top ten most popular sports in the entire world. Listed below are the countries in which ice hockey has the richest histories and most competitive landscapes.

The country in which ice hockey remains the most popular is Canada, which is unsurprising since the country is widely recognized as the birthplace of modern organized ice hockey. In 2008, the International Ice Hockey Federation (IIHF) declared that the first game of organized ice hockey was played in Montreal in 1875. Two years later, the Montreal Gazette published the first official rules of the game in both French and English. Since those initial games, ice hockey has become a cherished national pastime and, like many sports, an international symbol of power. In the first few decades of Olympic hockey competition, Canadian teams dominated, winning six of the seven games held between 1920 and 1952.

As other countries, especially in eastern Europe, have formed their own long attachments to ice hockey, hockey remains an integral part of Canadian national identity. With increases in competitive stress on both national and international levels, hockey is played somewhat less by the average Canadian populace, but the viewership has never been higher. Hockey players are still national celebrities while millions of households come together each year to watch the country’s seven main hockey teams compete as part of the National Hockey League (NHL). This is particularly true if either team playing is the fan favorite, like the Montreal Canadiens and the Toronto Maple Leafs. Nearly 150 years after its start, Canadians statistically watch hockey more than any other sport across all generations. In the 2020-2021 season, Canada also had nearly 350,000 players registered with the International Ice Hockey Federation, the second most hockey players of any nation.

The second major country with a national attachment to ice hockey is the United States. Several years after the first official game was played in Montreal, ice hockey had its first American game in 1883 on the Lower School Pond of St. Paul’s School in Concord, New Hampshire. A decade after that game, ice hockey became an American collegiate sport, and the first formal game was played between Yale University and John Hopkins University. This 1893 game is considered the start of ice hockey as a formal American sport.

In 1904, the International Ice Hockey Federation (IIHF) was formed, and the United States joined in the form of the U.S. Amateur Hockey League. Due to its proximity and massive popularity in Canada, American teams would also form connections with popular Canadian teams and associations such as the Pacific Coast Hockey Association. In 1912, the National Hockey (NHL) was formed, a major professional hockey league now composed of 24 American and 7 Canadian-based teams. Teams in the NHL compete for the Stanley Cup, the oldest trophy in North American sports and still one of the highest pinnacles of success in hockey history.

Though Canada still has hockey more entrenched in their national culture and identity, the popularity of hockey continues to rise in America. In fact, in the 2020-2021 season, the United States had over 450,000 players registered with the International Ice Hockey Federation, the most hockey players of any nation.

The third most popular country for ice hockey is the Czech Republic. The sport is regulated and run by the Czech Ice Hockey Association (CIHA). This civil organization was one of the founding member groups of the International Ice Hockey Federation (IIHF) from its start in 1908. Like other countries, they also form national teams that compete at international games and the Olympics. For the 2020-2021 season, the CIHA has around 130,000 registered players, the third highest number of participants across the globe.

As with Canada and America, the popularity of ice hockey in the Czech Republic is heavily increased by success in international competition. In 1996, the Czech men’s national hockey team won their first World Championship, and two years later, they won their first Olympic final in Nagano, Japan. The success and popularity of international hockey have skyrocketed almost three decades since, and the Czech Republic is still considered a modern powerhouse of professional ice hockey.

Pages Related to Where Is Ice Hockey Most Popular?