What Teams Did Jaromir Jagr Play For? 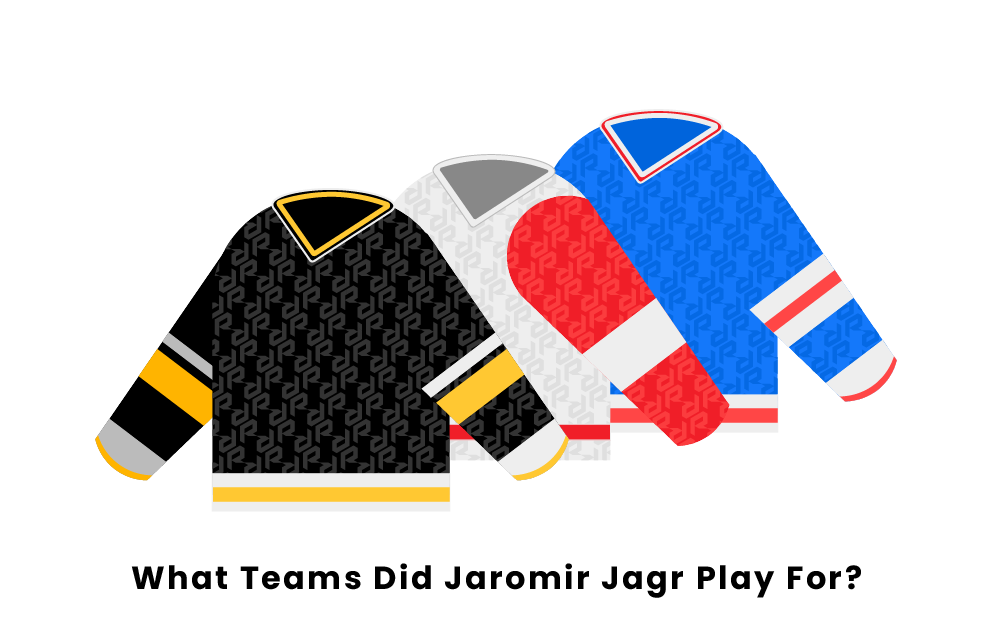 Jaromir Jagr is one of the most decorated NHL players of all time. When Jagr left the NHL for good, he amassed the second-most points in history. In total, Jagr played for nine NHL teams. Keep reading to find out more about his tenure with those teams.

Out of all the teams Jagr played for, the Pittsburgh Penguins are the team he had the most success with. During his eleven years with the Penguins, the winger won back-to-back Stanley Cups in 1991 and 1992 alongside legendary captain Mario Lemieux. Then, following the departure of Ron Francis in 1998, Jagr was promoted to team captain and won his only Hart Trophy in that ensuing 1998-1999 season. Jagr scored over 1.3 points per game and accumulated over 1,000 points during his tenure with the Penguins. On top of his two Cups and five Art Ross trophies, the Czech native was already a Hall of Fame-caliber player.

Jaromir Jagr was still in his prime when he left Pittsburgh for D.C. in the 2001 offseason. In 2003, he led the Capitals to the postseason with a team-leading 77 points. However, the Caps plummeted in the standings the following year, and Jagr was promptly traded at the deadline.

The New York Rangers traded for Jagr in the middle of a season in which they missed the playoffs, but it paid off big time the following year. When Jagr stepped in, he immediately established himself as the leader and finished second in the league in scoring in his first full season with the Rangers. The team made the playoffs in all three full years he played with the team.

After a three-year run in the KHL, Jagr took his talents back to the NHL at the age of 39. In his one season in the city of brotherly love, Jagr was nominated for the Masterton Trophy and helped upset the Penguins in the first round of that year’s playoffs.

Jagr played just 45 combined regular season games with the Stars and Bruins. After 34 games for Dallas, he was shipped to Boston at the trade deadline. He put up nine points in 11 games for the Bruins. Jagr proved to be a missing piece, as the Bruins advanced all the way to the Stanley Cup Finals but fell short to the Chicago Blackhawks in six games.

Following his 2013 Stanley Cup Finals appearance, Jagr signed with the Devils in the 2013 offseason. He spent a season-and-a-half with New Jersey and didn't make the playoffs while there.

The Panthers gave up multiple draft picks to acquire Jagr, and like the Rangers in 2004, they weren’t a playoff team immediately. However, the following seasons, Florida had its best regular season in franchise history to date, and Jagr was the team’s leader in points at 44 years old.

Jagr played a total of 22 games with the Flames in 2017-18 and scored just one goal. Following the 2017-2018 season, Jagr elected to go back to the Czech Republic and play for his hometown team, HC Kladno, who he has played for since.

Pages Related to What Teams Did Jaromir Jagr Play For?