What Is Roughing In Hockey? 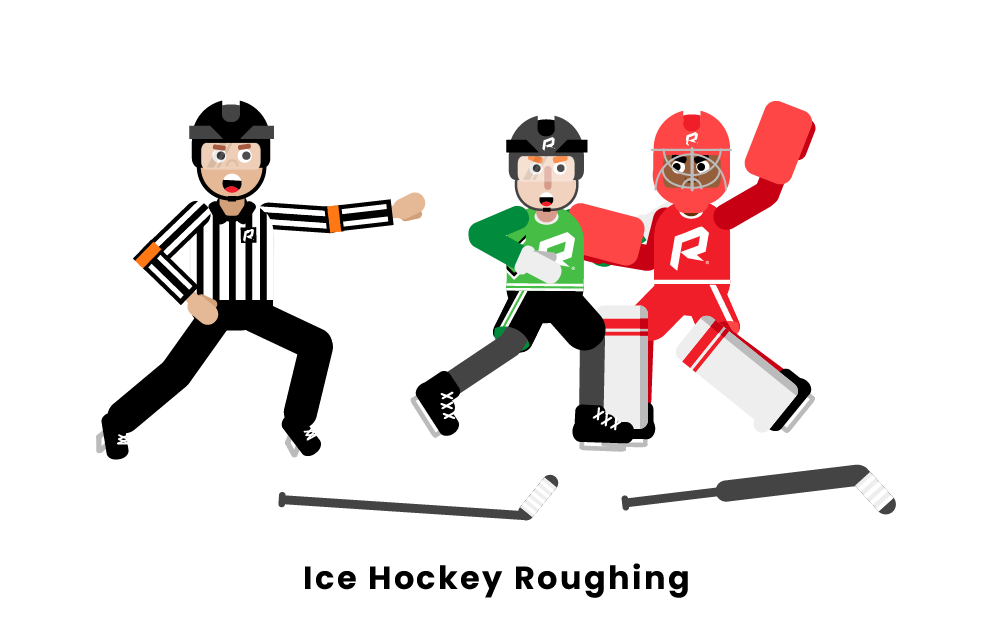 Roughing in hockey is a penalty that occurs when a player uses unnecessary force in contacting an opposing player, such as a punch.

Roughing can also be called when avoidable contact occurs after the whistle is blown or when a player forcely contacts another while they do not have possession of the puck.

To signal roughing during a game, the referee will blow the whistle, clench his hand into a fist, and swing his arm from his body both upward and outward.

The penalty for roughing is typically a minor penalty resulting in a 2 minute stay in the penalty box. If the roughing is severe and results in injury, referees can warrant a major penalty resulting in 5 minutes in the penalty box. Major penalties will also be inflicted if a player commits roughing contact with an opposing player who doesn't have possession of the puck after the whistle. Misconduct penalties can also be granted by the referee.

How long is a roughing penalty?

A roughing penalty occurs when there is any hostile and unnecessary contact to an opponent, such as pushing or shoving. This also occurs when there is any aggressive behavior or exchanges between players after the whistle is blown. This penalty is considered to be of a minor level, which warrants the penalty infraction time of 2 minutes. Any minor penalties that result in the injury of an opponent may be changed to major penalty, which would then cause this penalty to be the length of 5 minutes.

What is a 5-minute penalty in hockey?

A major level penalty is a severe rule violation that sanctions a 5-minute penalty. When this penalty is enforced, the involved player or players must sit in the penalty box for the duration of 5 minutes during actual game playing time. Some penalties that warrant a 5-minute stay in the penalty box are: butt ending, checking from behind, fighting, fight instigating, holding/grabbing the facemask, pushing-off of opponents with skates, leaving the bench during an altercation, and spearing. Also, any minor penalty that results in an injury becomes a 5-minute penalty.

What are the different types of penalties in hockey?

There are three types of penalty levels in hockey: minor, major, and misconduct. For more severe penalties, a harsher level of punishment will be enforced. Different kinds of hockey penalties include butt ending, checking from behind, cross checking, elbowing, fighting, hooking, interference, kneeing, roughing, slashing, spearing, and tripping. All player penalties result in the player or players involved spending an allotted amount of time in the penalty box.

What is a slashing penalty in hockey?

Slashing occurs when a player swings their stick at an opponent. Any sort of forceful swing of a stick on an opponent's body, hands, or stick is considered as slashing. Slashing penalties do not require contact to be made with a player, only the attempted act. Major or minor penalties can be enforced depending on the severity of the act. Player misconduct penalties can also result if any players are injured as a result of the slashing.

Pages Related To What Is Roughing In Hockey?

What Is Center Ice In Hockey?Hockey Minor PenaltiesHockey Equipment
What Is A Hat Trick In Hockey?Hockey TimeoutsWhat Does A Wing Do In Hockey?
Hockey Offsides Rule For KidsWhat Is The Challenge Cup In Hockey?5 Most Common Ice Hockey Injuries