What Is Olympic Ice Hockey? 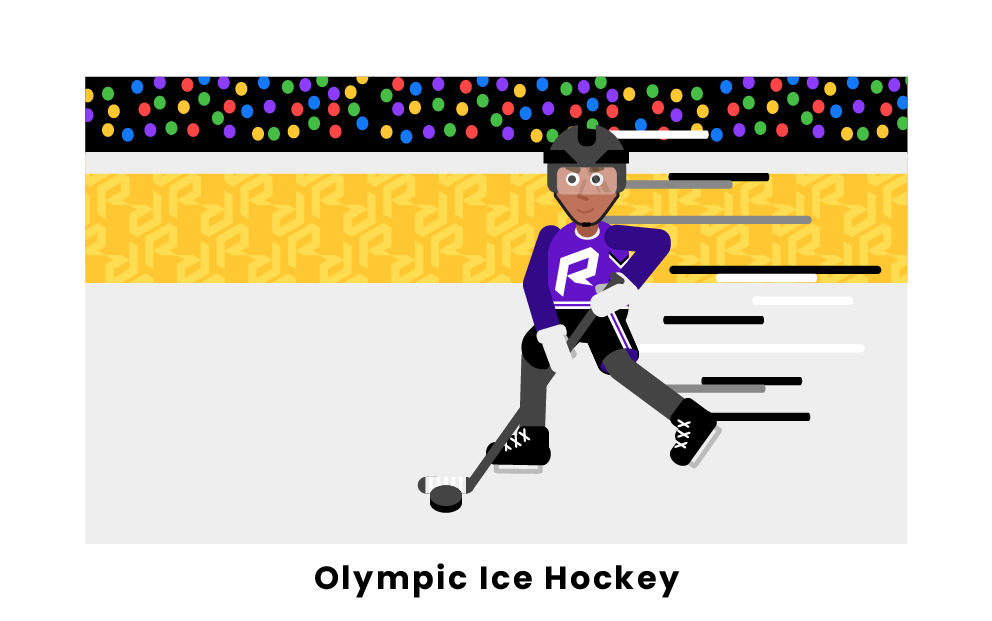 Ice hockey is a team sport played in many countries around the globe. There are professional hockey leagues in various countries, such as the U.S.A., Russia, Sweden, Finland, and more. The most famous league is the National Hockey League (NHL), which plays in the U.S.A. and Canada. Every four years, there is an Olympic Ice Hockey tournament between the world’s top hockey countries.

At the Olympics, players represent their native country on a global stage. The Winter Olympics occur every four years, each including hockey tournaments for men and women.

What Countries Compete in Ice Hockey at the Olympics?

Ice hockey at the Winter Olympics has seen many different formats over the years. In some Olympics, as few as six nations competed in the hockey tournament. Other years, as many as 14 countries participated. Most recently, the men’s tournament has consisted of 12 teams, while the women’s tournament has been made up of 10 teams.

For the 2022 Olympic Men’s Ice Hockey, the top eight teams received automatic bids due to their 2019 IIHF Men’s World Ranking. These rankings were determined by the IIHF World Rankings Points system, where teams are given points based on their performance at past IIHF World Championships. Under this point system, teams’ past performances are weighted, with more recent performances having a bigger effect on their ranking. The eight teams which qualified from their world rankings for the 2022 Olympics were:

China was given an automatic bid since they were the host country for the 2022 Winter Olympics.

The last three spots were up for grabs via a series of qualifying tournaments. The three teams that qualified from these tournaments were Slovakia, Latvia, and Denmark. With the addition of these three teams to the eight which qualified by IIHF World rankings, and the host team China, the selection of 12 teams was completed.

What is the Format of the Ice Hockey Olympic Tournament?

The Olympic tournament itself consists of two stages: a group stage and a knockout stage. During the group stage, teams play a round-robin schedule against countries in the same group as them. Groups are determined by IIHF World rankings, with teams separated into three balanced groups.

After the group stage, the top eight teams advance to the knockout stage. Team standings are determined primarily by record, with the teams who won the most games during the group stage earning the top spots. In the event of a tie, the team with a better goal differential gets the higher seed; there are often ties since the group stage only consists of a few games.

Since there are eight teams in the knockout stage, there are three rounds: the quarterfinals, the semifinals, and the championship. The winner of the championship game is honored with the gold medal for ice hockey.

How Has Olympic Hockey Changed?

Olympic hockey first became a fixture in 1920. Since then, the rules and format of the tournament have been altered many times.

One point of contention has been whether or not to allow professional players to compete, as opposed to limiting the player pool to amateurs. NHL players have not been allowed to compete at the Olympics since 2014, when Sidney Crosby led team Canada to a gold medal. NHL players also were not permitted before 1986. As a result of this rule, the “Miracle on Ice” occurred in 1980, when young Americans defeated a squad of Soviet full-time players to win the gold medal.

In some years, players from certain countries have not been allowed to play, or not allowed to play under the name of their country, due to political or disciplinary circumstances. For example, Russian hockey players had to play as “ROC,” or “Russian Olympic Committee,” in the 2018 and 2022 Olympics. In these years, Russia won gold and silver, respectively.

How Does Ice Hockey Work?

Ice hockey is a 6-on-6 team sport played on a sheet of ice. Each team has one goaltender plus five skaters on the ice. Players wear ice skates to allow them to glide around the rink, plus various other equipment to protect them from the physical aspects of the sport. Referees patrol the rink to ensure fair play and call penalties should somebody break the rules. The general goal of hockey is to score more goals than your opponent in the 60-minute time frame of the game.

Credit for the invention of modern ice hockey is typically given to James Creighton. In 1875, Creighton brought the sport, which at the time was no more than a casual hobby, from Nova Scotia to Montreal. Creighton taught fellow athletes how to enjoy the sport and engaged in the first-ever official game of hockey on March 3rd, 1875. This game consisted of James Creighton and men from McGill University, a notable school in Canada. Canada was home to the first ever hockey players, although hockey also has some roots in Europe.

Is Ice Hockey An Olympic Sport?

Ice hockey is an Olympic sport and has been since 1920. Women’s ice hockey was not added to the Olympics until the IOC voted for its addition at the 1992 IOC Session. Despite the decision to add a women’s tournament in 1992, no such tournament was put into place until the 1998 Olympics in Nagano, Japan.

Pages Related to What Is Olympic Ice Hockey?