What Is An Illegal Stick Penalty In Hockey? 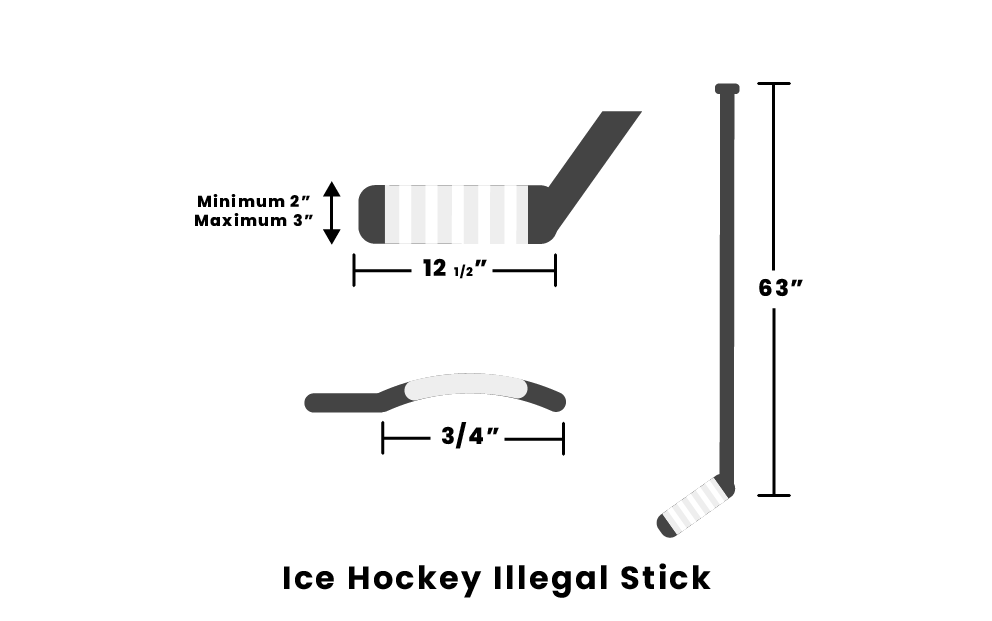 An illegal hockey stick refers to a playing stick that violates the outlined rules regarding the material, length, width, and curve of both the blade and shaft of the stick.

All sticks must be composed of wood or another league approved material. No projections are allowed on the stick in order to keep players safe on the ice. Your stick needs to abide by these important rules!

A playing stick is not allowed to extend past sixty-three inches (63") in length from the end of the shaft to the heel. The blade must not exceed twelve and one-half inches (12 ½") in length or 3 inches in width. The blade must be beveled on all edges per the rulebooks set by USA Hockey and the NHL. The curve of the blade is restricted to three-quarters of an inch (¾"). If your stick doesn't match these requirements, it is considered illegal!

What is the difference between a playing stick and a goaltender stick?

A goaltender has a different stick compared to the other players on the ice! The blade of this stick can be at a maximum of 3 ½ inches in width. From the widened top of the shaft to the heel of the stick, it must not exceed 26 inches. While from the heel to the end of the blade, the length must not exceed 15 ½ inches. These are precise requirements to avoid a penalty!

Are there any stick exceptions made for certain players?

In the NHL, there are very tall players on the ice! The tallest player is Zdeno Chára of the Boston Bruins at 6 feet and 9 inches! The normal hockey stick requirements may not work for one of these taller players. Therefore, the NHL accepts requests for players, 6'6 and taller, to use a longer stick that must be submitted to the NHL Hockey Operations Department. The maximum length for this stick is sixty-five inches!

What type of sticks do NHL players use?

When the NHL started over 100 years ago, the players primarily used only wooden sticks. In the 1990s, aluminum hockey sticks started to become extremely popular after legend Wayne Gretzsky promoted the use of these new sticks. However, all of the players eventually switched over to composite sticks by the year 2004. Now, many professional NHL players have their sticks custom-made with a variety of materials that will help them perform better on the ice!

What happens if you break your stick during a game?

If you break your stick in a hockey game, you need to immediately drop it to avoid any penalties! It is very dangerous to hold a broken stick, due to the scary possibility of being checked by an opponent. If this happens, the player on the ice needs to go to the bench to grab a new stick or one of their teammates can bring a new stick directly to them on the ice.

Pages Related To What Is An Illegal Stick Penalty In Hockey?