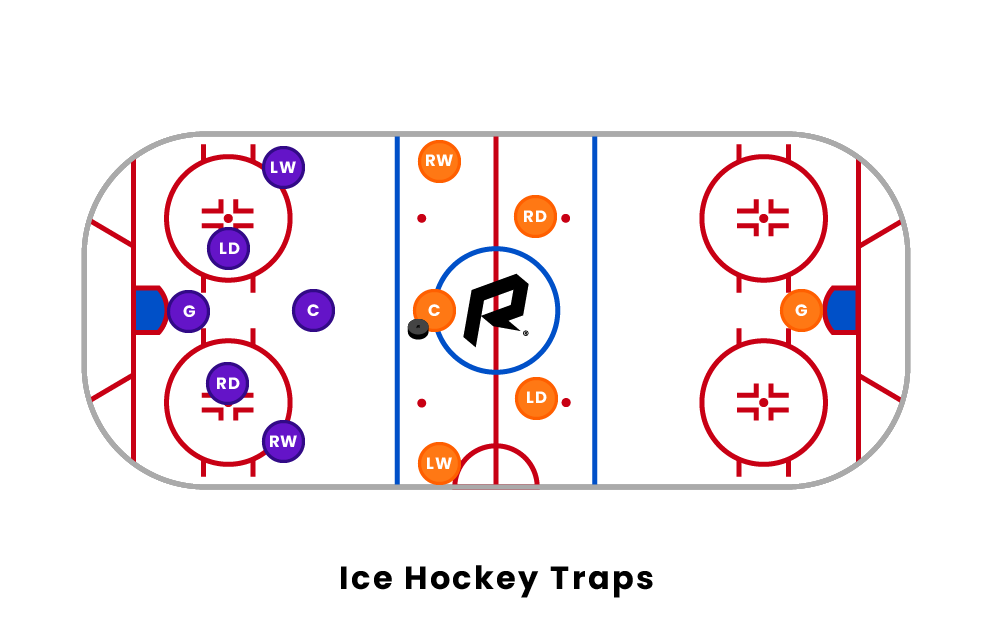 What is the Neutral Zone Trap in Hockey?

In hockey, traps happen when the neutral zone on the ice is “clogged” with defensive players, making it harder for the attacking team to move up the ice. Traps in ice hockey are typically used when the defense feels outclassed on offense by their opponent. The pressure created by the trap can slow down their opponent and help predict what their next pass or movement will be. In general, teams will try to keep one forechecker and three to four players in the neutral zone during a game. The goal is to make the other team's offense feel like they have nowhere to go when “trapped.”

When a team is executing a neutral zone trap, every player on the team is responsible for covering different parts of the ice. One of the forwards will act as the main forechecker and pressure the puck carrier, forcing them to pick a side of the ice to continue carrying the puck. On either side of the ice behind the main forechecker is the second line of pressure, typically played by the remaining two forwards. Whichever side the puck carrier is forced to bring the puck up, the forward on that side will pressure heavily. This eliminates passing lanes and prevents the attacking team from gaining speed in the neutral zone. Lastly, if the puck carrier gets through the forechecker and second line of defense, one of the two defensemen will provide the last line of defense and pressure the puck carrier.

How do you beat the trap in hockey?

To beat the neutral zone trap in hockey, teams must focus on supporting the puck carrier and opening up passing lanes. The trap is contingent on isolating the puck carrier, so teams facing the trap must provide extra help to them. Breakouts that rely on creativity and quick passes are typically the best ways to combat the trap.

Who invented the trap in hockey?

It is unclear who invented the trap in the National Hockey League, but Jacques Lemair is credited with popularizing the system during the 1990s. Lemair led the New Jersey Devils by using the neutral zone trap system during a game against the Detroit Red Wings in the 1995 Stanley Cup Finals. This move ultimately brought the Devils to victory that night, which increased the popularity of the attack throughout the NHL.

What is a common trap formation?

A common trap formation in hockey is a 1-3-1 trap, which seeks to create a player wall at the centerline, helping to block passes up the boards of the ice and forcing opponents outwards. The forechecker’s goal during this formation is to seal off passing lanes through the middle and force whichever opponent is carrying the puck towards the boards. A defender should be waiting there in an attempt to retrieve the puck back for his team.

What does the goalie do during a neutral trap zone?

The goalie must maintain their usual position and be especially focused during a neutral zone trap because a breakaway may take place. During a neutral trap zone, it is much more difficult for the opponent’s offense to try and put any shots on goal. Although, if an opponent does get through, the goalie is then at risk of being put into a 1-on-1 situation, giving the offensive player a much higher chance of scoring.