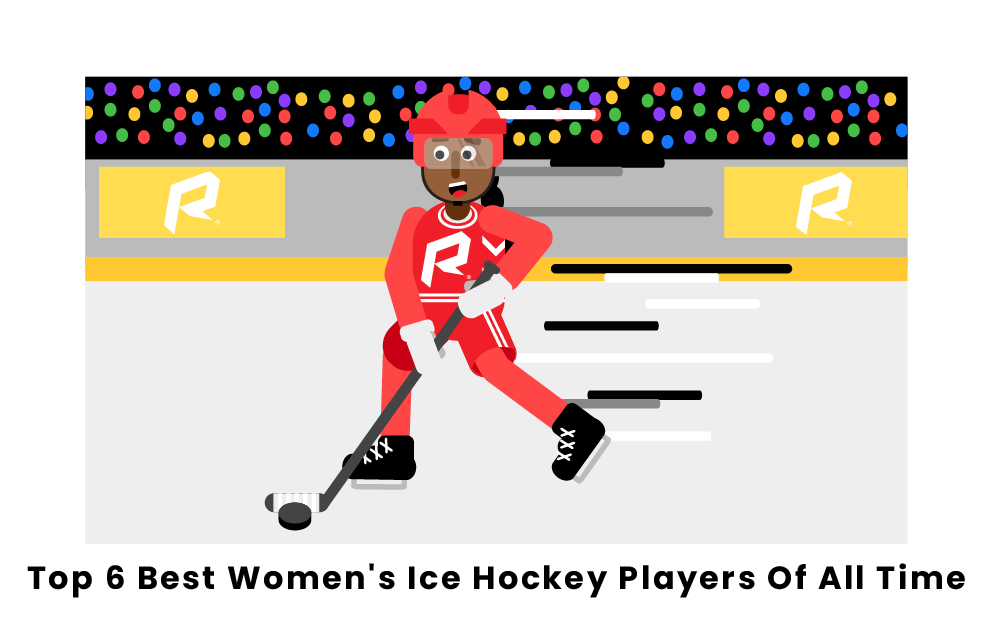 Women’s ice hockey is an up and coming sport, with its biggest claim to fame being its inclusion in the Winter Olympics. As the sport has grown, certain athletes have risen above the rest to be known as all time greats. Read on to learn about the top six best women’s ice hockey players of all time.

Who are the top 6 best women's ice hockey players of all time?

Hayley Wickenheiser is known by many as a pioneer of women’s hockey. She is respected as the best women’s hockey player of all time, and she also was the first woman to register a point in a professional men’s hockey league, in Finland. She has helped grow the game more than any other player on this list, inspiring young girls all over the world to play hockey.

When she was only 15 years old, she competed with the Canadian Women’s National Team at the Olympics. She ended up winning four gold medals throughout her career, becoming one of the most successful athletes of all time. Her skill is undeniable and she was always the smartest player on the ice. She will go down in history as the best women’s hockey player not only because of what she did on the ice, but also because of everything she has done for women’s hockey outside of the rink.

Poulin is widely known as the best current women’s hockey player. She is only 30, and she has already accomplished so much. She scored the gold medal winning goals in the Olympics in 2010 and 2014, and has long been the star of the Canadian Women’s National Team. Poulin also helped lead Team Canada to a gold medal in the 2022 Olympics. She was the MVP of the CWHL three times, won the World Championships Best Forward Award and World Championship MVP. She has the accolades that any great would have, but she has done all this so early in her career. Poulin has inspired many with all of these accomplishments. Since she is so young, she has a chance to take over the number one spot on this list if she continues to dominate the sport. She has done nothing but win over her 12 year career, and looks poised to continue doing so.

Cammi Granato was one of the founding members of the US Women’s National Team when she competed at the 1990 World Championships. She was a star in women's hockey for over 15 years, and scored 96 points in 54 career international games. She captained the 1998 US National team to a surprise upset of the Canadians, taking home the gold medal. She was the flag bearer at the closing ceremonies, and continued to have success in the international hockey world. She is the all-time leading scorer in international women’s hockey. After retiring, she got into broadcasting and was the first female inducted into the U.S. Hockey Hall of Fame, and the first female inducted into the Hockey Hall of Fame. She remains one of the greatest and most influential players in the history of women’s hockey.

Cassie Campbell-Pascall is one of the most talented players to have ever played hockey, and also one of the most influential. She is the only hockey player to captain two different Olympic gold medal teams, in men’s or women’s hockey. She also won six Women’s World Hockey Championships over her career, piling up 100 points during international play. Since 2006, she has been a broadcaster for CBC’s Hockey Night in Canada, and served on the selection committee for the Hockey Hall of Fame. Her accolades speak for themselves, but what they don’t show you is the heart that she competed with and inspired so many with.

Manon Rheaume was the first woman to ever play in one of the four major sports, when she played goalie for the Tampa Bay Lightning during an exhibition preseason game in 1992. Although she is best known for astonishing achievement of playing in the NHL, she also played in major juniors and made a living playing hockey with men. She was somewhat of a celebrity, but she never wanted any attention. She just wanted to do what she loved, and that was playing hockey. She also played women’s hockey in the Olympics and World Championships, winning a silver medal at the 1998 Games in Nagano and gold at the World Championships in 1992. There was a lot of controversy over her career, because many thought that her stint with many men’s teams was solely for publicity, but she earned it. She was a stellar goalie who could prove her worth on the ice. She inspired millions by showing that women could compete with men at the highest level of sport.

Brianna Decker is still playing hockey, but she is well on her way into the Hall of Fame. She has won gold at the Olympics, gold at the World Championships, an NCAA title, and CWHL and NWHL titles as well. She is a winner. She has scored at an unreal pace over her career, with 1.84 points per game, which is on pace with the best of all time. She has been a leader for the US Women’s National Team over the last 12+ years, and she has helped the team break barriers and win every title imaginable.

Angela Jones is a world-renowned former women’s ice hockey player, whom many refer to as the first superstar of modern women’s hockey. She was an electric hockey player, predominantly playing center during her career with the Canadian National Hockey Team and various senior teams. Her achievements on the international level are well documented, with six gold medals combined between her time competing in the IIHF World Women’s Championship and the 3 Nations Cup. More importantly, however, she is credited as a major part of women’s ice hockey going mainstream. It was for these reasons that she was inducted into the Hockey Hall of Fame as one of the first two female inductees, alongside Cammi Granato.

Natalie Darwitz was one of the faces of US Women’s Ice Hockey in the 21st century. After attending the University of Minnesota, Darwitz played forward for the US Women's national team. Darwitz helped lead the team to silver medals in the 2002 and 2010 Winter Olympics while also receiving a bronze in the 2006 Olympics. She also led the 2006 and 2010 Olympics in scoring. Outside of the Olympics, Darwitz won three gold medals and five silver medals across eight separate IIHF World Women’s Championships.

Who is the greatest women’s hockey player of all time?

The greatest women’s hockey player is Hayley Wickenheiser. Most notable amongst her host of achievements are her four Olympic gold medals won in representation of Canada in the 2002, 2006, 2010, and 2014 Olympic Games. She also netted a silver medal in the 1998 Olympics. This Olympic dominance, along with her induction into the Hockey Hall of Fame, have made it indisputable that Wickenheiser is the greatest women’s hockey player of all time.

What women’s hockey player has won the most Olympic medals?

Canadians Hayley Wickenheiser and Jayne Hefford are tied for the women’s hockey players with the most Olympic medals. Wickenheiser and Hefford were teammates on the Canadian Women’s Ice Hockey Team and each won four gold medals to go along with one silver. They won a gold in every Winter Olympics from 2002 to 2014, taking home their only silver in 1998. Fellow teammate, Caroline Ouellette, was a part of each of the four golf medal runs, but did not partake in Canada’s silver medal tournament.

Who was the first woman inducted into the Hockey Hall of Fame?