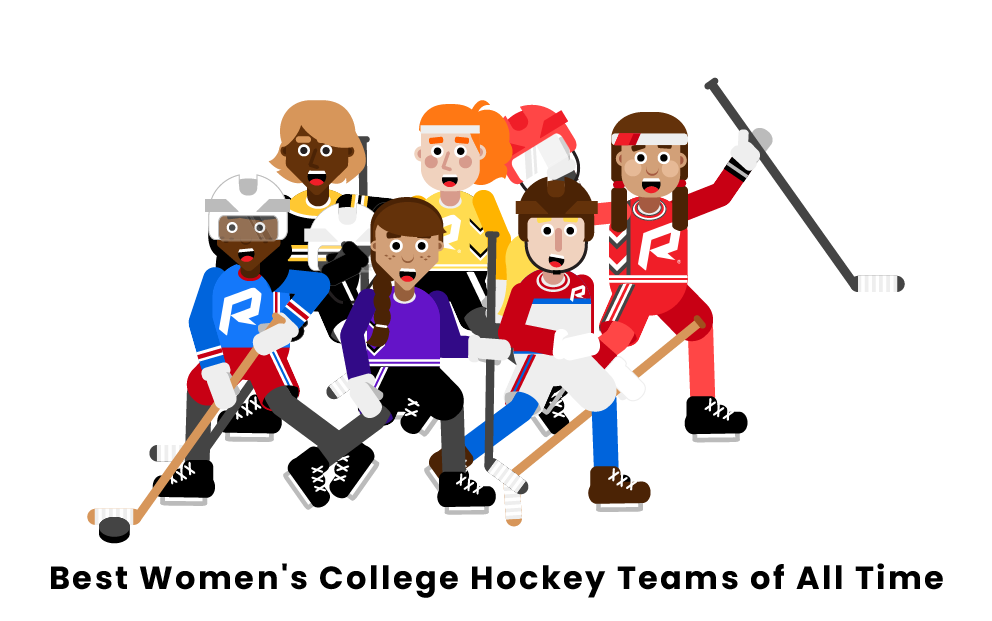 Even though it is one of the youngest and smallest women’s sports leagues within the NCAA, women’s hockey grows in popularity and competitive intensity with each passing year. Of the 108 programs across the NCAA, listed below are the six best NCAA women’s hockey teams of all time.

What are the best NCAA women’s hockey programs of all time?

The greatest women’s college hockey team of all time is the Minnesota Golden Gophers. Playing for the University of Minnesota at their Twin Cities campus, the team played and won their first NCAA championship in 2004 against the Harvard Crimson. The following year, they successfully defended their title, again against Harvard. The Golden Gophers did not return to an NCAA championship until 2012 when they handily defeated the Wisconsin Badgers. In that same year, they won 62 consecutive games, which is the longest winning streak in college hockey history. They then won the championship three more times in 2013, 2015, and 2016. That last win gave them a total of six NCAA Championships, the most of any women’s hockey team.

The Wisconsin Badgers represent the University of Wisconsin. In 2005, the team made its first NCAA tournament appearance but failed to make the Frozen Four. They returned and ultimately won the championship against the Minnesota Golden Gophers in three straight games the following year. In 2007, they successfully defended that title against the Minnesota-Duluth Bulldogs. Though the Bulldogs got their revenge the next year, Wisconsin returned in 2009 to defeat Mercyhurst in five games. With a win in 2011 against Boston University Terriers, in 2019 against the Golden Gophers, and in 2021 against the Northeastern Huskies, the Wisconsin Badgers hold six total wins. They are tied with Minnesota for most NCAA women’s hockey championship titles.

The Minnesota-Duluth Bulldogs represent the University of Minnesota-Duluth and are longtime rivals of the Minnesota Golden Gophers. In 2001, they won the inaugural NCAA championship 4-2 against the St. Lawrence Saints. They defended their title successfully against the Brown Bears and then the Harvard Crimson for the next two years. In 2008 and 2011, the Bulldogs defeated the Wisconsin Badgers and the Cornell Big Red for a total of five NCAA Championships. Though they have spent over a decade with no further titles, the Minnesota-Duluth team is still renowned for its overall success in the NCAA Tournament.

The Clarkson University women’s hockey team, known informally as the Clarkson Golden Knights, has dominated the NCAA circuit for over a decade. In 2010, they made their first Frozen Four appearance. In 2014, the Golden Knights narrowly beat the Minnesota Golden Gophers 5-4 for their first championship win. In 2017, the team returned to the championship round and defeated the Wisconsin Badgers 3-0. They successfully defended their title against the Colgate Raiders for a third NCAA Championship win the following year. Thanks to these many recent successes, the Golden Knights are considered one of the best women’s hockey teams of all time.

The Ohio State Buckeyes represent Ohio State University. Though the team largely had only moderate success since its start in 1999, it found a novel strength in the last few years thanks to new leadership. Under head coach Nadine Muzerall, the Buckeyes made their first Frozen Four appearance in 2018. In 2021, they appeared again but were defeated by the Wisconsin Badgers. In 2022, they made their third Frozen Four appearance and won their first NCAA Championship 3-2 against the Minnesota-Duluth Bulldogs. Thanks to this fresh burst of success, the Ohio State Buckeyes are considered one of the best women’s hockey teams in the NCAA.

Which women’s college hockey program has the most wins of all time?

The women’s college hockey program with the most wins of all time is the Minnesota Golden Gophers. In their first official season (1997-1998), the team won 21 games, lost 7, and tied 3. Except for the 2020-2021 season, due to COVID cancellations, the Golden Gophers usually won between twenty and thirty games every season and even once won all 41 games of their 2012-2013 season. As of 2022, the team has an astonishing 720 total wins.

Which women’s college hockey program has won the most NCAA Championships?

Which women’s college hockey program has the most Frozen Four appearances?

The women’s college hockey program with the most Frozen Four appearances is the Minnesota Golden Gophers. They made their very first in 2002. The team made a streak of appearances for the next four years, winning the championship twice. In 2009 and 2010, they again made it to the Frozen Four but were defeated by Mercyhurst and Minnesota-Duluth, respectively. From 2012 to 2017, the Golden Gophers participated six consecutive times, ultimately winning four more championships. With their most recent appearance in 2019, they hold the record of 14 Frozen Four appearances.