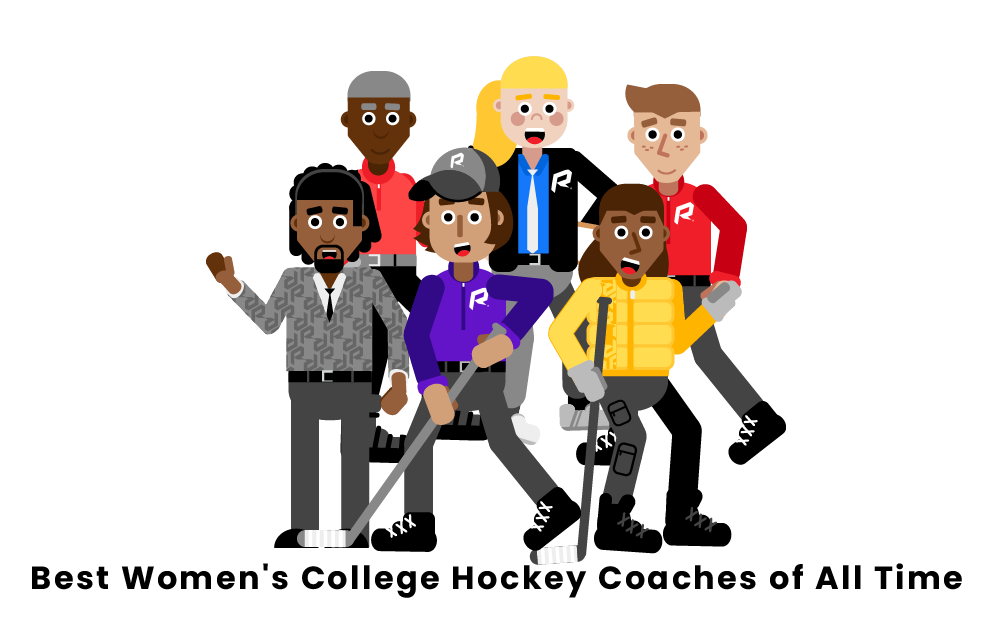 Women’s college hockey is one of many sports under the supervision of the NCAA. The sport officially became sanctioned as an NCAA sport in 2000, but there have been teams playing the game since Brown University created the first team in 1965. Below are some of the most successful coaches women’s college ice hockey has seen.

Who are the best women’s NCAA hockey coaches of all time?

Bill Mandigo began his ice hockey coaching career for the men’s hockey team at his alma mater, Wesleyan College, upon his graduation in 1983, where he served as an assistant for two seasons. After brief stops at The Hill School and Burrillville High School in Rhode Island, Bill became the women’s ice hockey coach at Division III Middlebury College in Vermont in 1988, where he is still the head coach today. Over the past 34 years, Mandigo has obtained numerous accolades that have put his name at the top of the list of most successful women’s ice hockey college coaches. He ranks first all-time with 625 career wins and has led Middlebury to six national championships (2000, 2001, 2004-06, 2022). Bill has also won American Hockey Coaches Association (AHCA) Coach of the year four times. Furthermore, in the 2021-22 season, along with winning the national championship, Mandigo led Middlebury to the first undefeated season in NCAA Division III women’s ice hockey with 27 wins and 0 losses.

Mark Johnson first came onto the national stage as a member of the 1980 United States Olympic men’s ice hockey team. This team performed the famous “Miracle-on-Ice” victory over the heavily favored Soviet Union squad, during which Johnson scored two goals on their way to the gold medal. After a successful 11-year NHL career, Johnson began his coaching career at two Wisconsin high schools (Verona and Madison Memorial). Johnson came to rise as a coach while coaching the Madison Monsters of the Colonial Hockey League for the 1995-96 season, at the conclusion of which he won coach of the year.

After six years of being an assistant for the University of Wisconsin men’s hockey team, Johnson was named head coach of the women’s hockey team in 2002, where he is still coaching today. In his career as head coach, Johnson has won over 79% of his games for a total of over 565 wins. Additionally, he has led the Badgers to six National Championships, won 13 different coach of the year awards, and nine conference titles in the Western Collegiate Hockey Association (WCHA). Johnson has also helped to bring his player’s individual success as, starting with Sara Bauer in 2006, he has coached five different women who went on to win the Patty Kazmaier Memorial Award, which is given to the nation's top NCAA Division I women's hockey player after each season.

Prior to his coaching career, Michael Sisti played four years of college hockey at Canisius College, scoring 74 career goals and registering 163 points. After three years as a graduate assistant at Canisius, Sisti moved on to Mercyhurst College in Erie, Pennsylvania, where he was an assistant for the men’s hockey team for six seasons. Sisti became the first women’s ice hockey coach at Mercyhurst in 1999 and, to this date, has been the only coach in program history. During his career, Sisti’s teams have won over 520 games, 17 regular season championships, 15 conference tournament titles, and made a record ten straight appearances in the NCAA tournament from 2004-2013. Additionally, Sisti coached Vicki Bendus to the 2010 Patty Kazmaier Memorial Award. All of his coaching accomplishments led Sisti to be inducted into the Erie Sports Hall of Fame in 2018.

Katey Stone became the head coach of the Harvard women’s hockey team before the 1994-95 season and has led the Crimson for the 27 seasons since. Prior to coming to Harvard, Stone was a standout hockey and lacrosse player for the University of New Hampshire, earning All-ECAC (awarded to the best players in the ECAC league) in hockey and being a two-time All-American (awarded to the best players in the country regardless of league) in lacrosse. Since coming to Harvard, Stone has established herself as one of the elite coaches in the sport of women’s ice hockey. She has won over 515 games as head coach and led her team to 12 NCAA tournament appearances, four appearances in the NCAA title game, and an AWCHA championship in 1999. The AWCHA, which stands for American Women’s College Hockey Alliance, organized and held the first three national championships in women’s college hockey from 1998-2000, prior to the NCAA officially sanctioning the sport for the 2000-01 season.

In addition to all of Stone’s accolades as a coach, she also has been integral to the success and growth of women’s ice hockey. Stone has been a member of three committees that help run the sport; the NCAA rules committee, the Patty Kazmaier Memorial Award selection committee, and the NCAA Championship committee. Moreover, she previously served as president of the American Women’s Hockey Coaches Association. Lastly, on November 13th, 2021, Stone became the first female head coach to win 500 games, further proving herself as both an elite coach and a pioneer in the sport.

Mike Carroll has been the head coach of the women’s hockey team at Gustavus Adolphus College in Minnesota since 1999. Prior to his arrival there, Carroll played hockey and baseball at Mankato State University in Minnesota and went on to play professional baseball in the Montreal Expos organization for two years. He got his head coaching career started in 1991, coaching the boy’s hockey team at Mankato West High School, doing so for eight years. Since he has become the head coach at Gustavus Adolphus, Carroll has turned the Gusties into a powerhouse in the Minnesota Intercollegiate Athletic Conference (MIAC). During his time there, the Gusties have won the conference regular-season championship 15 times. Also, Caroll has earned coach of the year honors eight times, coached 24 players who earned All-American honors, and coached six players who have earned player of the year in the MIAC. Carroll’s 465+ victories rank him second all-time in the NCAA’s Division III behind Bill Mandigo’s 625+.

Kevin Houle has coached the Plattsburgh State Cardinals women’s hockey team for the past 19 seasons, beginning with the 2003-04 season. Houle was initially hired as the interim coach, but after taking the team to the NCAA tournament that season, he was hired as the permanent head coach following the 2003-04 season. Prior to becoming the head coach of the women’s team, Houle helped out the Cardinals men’s hockey team in various assistant coaching roles from 1989-2003. Since taking over the women’s team, Houle has helped to make them into a perennial winner in the Eastern College Athletic Conference (ECAC). The Cardinals have won over 440 games, seven ECAC West Championships, made eight NCAA tournament appearances and had 26 players earn AHCA All-American honors. As far as his own accolades, Houle has won 16 different coach of the year awards: six-time AHCA coach of the year, three-time US College Hockey Organization (USCHO) coach of the year, and seven-time ECAC west coach of the year.

Which women’s college hockey coach has the most wins?

The women’s college hockey coach who has won the most games is Bill Mandigo. During his 33 seasons at Middlebury College, Mandigo has averaged just under 19 wins a season, leading to his grand total of over 625 career wins. He is the only coach in the sport who has won 600 games. Mandigo has won these games in over 830 career games coached, meaning he has won just over 75% of games he has coached during his time at Middlebury.

Which women’s college hockey coach has won the most NCAA Championships?

Mark Johnson has won the most NCAA championships in women’s college hockey, leading the Wisconsin Badgers to six NCAA titles. The Badgers have won the championship in 2006, 2007, 2009, 2011, 2019, and 2021. The Minnesota Golden Gophers have also won six national championships, however, their championships were split between two coaches. Laura Halldorson won two championships with the Gophers in 2004 and 2005, while Brad Frost won four in five years in 2012, 2013, 2015, and 2016.

Which women’s college hockey coach has coached for the most seasons?

Not only has he won the most games, but Bill Mandigo has also coached for the most seasons out of any women’s college hockey coach. Starting with the 1989-1990 season, Mandigo has led the Middlebury Panthers for 33 seasons. His 33 seasons are six more than the second longest-tenured coach in women’s college hockey, Katey Stone. Stone has coached the Harvard Crimson every year since the 1994-95 season for a total of 27 seasons.