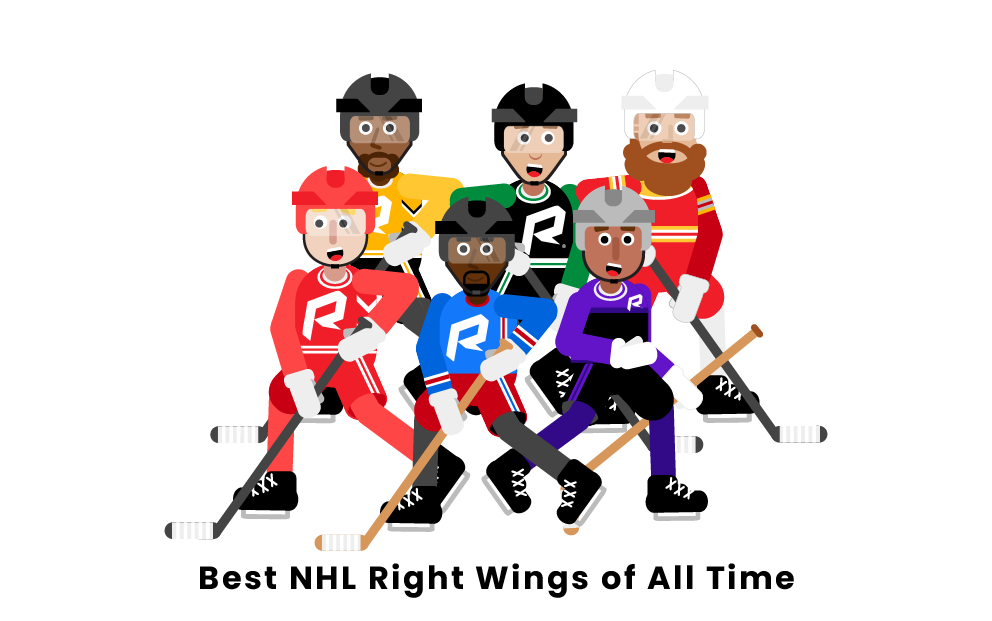 Hockey is a sport that requires extreme skill and grace to maneuver at high speeds on ice while also requiring physical toughness and strength. The NHL has seen the greatest talents to ever step on the ice, and below are the six best right wing players in league history.

Who are the best NHL right wingers of all time?

If any athlete has ever come close to defeating Father Time, it must be Gordie Howe. Howe joined the NHL in 1946 at the age of 18 and would not retire from the league until the conclusion of the 1979-80 season. Over the course of his lengthy career, he made 23 All-Star appearances, led the league in points six times, and was widely considered to be the best player in the league. The most impressive thing about Howe’s game was the consistency. For 22 straight seasons, he recorded at least 23 goals. “Mr. Hockey”, as he was known, became famous for his toughness and all-around impact as well, inventing the “Gordie Howe Hat Trick,” which included a goal, an assist, and a fight all in the same game.

Jaromir Jagr is another player to defy the effects of aging, as he has recorded over 29 points in a season six times after turning 40. During his extensive 24-year career, Jagr made a name for himself not just as one of the best goal scorers in the NHL, but offensive creators in general. He recorded 1,921 points, which is the second-most in NHL history, and won five Art Ross Trophies, which is awarded to the player with the most points in each season. At the age of 20, Jagr scored a goal revered by many as one of the “greatest goals ever scored” in the Stanley Cup for the Pittsburgh Penguins. He led the league in scoring four consecutive seasons, something only Wayne Gretzky, Gordie Howe, and Phil Esposito have also ever done.

Mike Bossy is one of the best pure goal-scorers that the NHL has ever seen, retiring with 573 career goals in just 752 games. That gives Bossy the highest goals per game average of any player in NHL history, which is no surprise considering he led the league in power-play goals on three separate occasions and recorded nine straight seasons with at least 50 goals. He wasted no time making his mark in the league either, as he utilized his quickness and explosive shot to score 53 goals as a rookie, breaking the previous record of 44. Unfortunately, a back injury ended his career after just ten seasons, but that didn’t prevent Bossy from producing the most 60-goal seasons in history, with five of them.

Guy Lafleur is one of the greatest scorers ever to set foot on the ice, as he would become the first player in NHL history to record six consecutive seasons with at least 50 goals and 100 points. Lafleur would lead the league in points three times before his 27th birthday. He was one of the game’s best crunch-time performers, winning a Conn Smythe Trophy during the Montreal Canadiens’ 1976-77 Stanley Cup victory and leading the league in game-winning goals on four occasions. Despite his slow start in the league, Lafleur would flourish by just his fourth NHL season, when he recorded 119 points in the regular season before adding 19 more in only 11 playoff games.

The French-Canadian, Maurice “The Rocket” Richard, was one of the most imposing and fearsome players in NHL history while also being one of the most beloved. Richard dominated with brute strength and a toughness that few competitors could match, as he would score goals with defenders draped all over him. He was an icon for Canadiens’ fans as a member of one of the greatest sports dynasties to ever occur. The Canadiens would win eight Stanley Cups during Richard’s tenure, including five consecutively. Richard netted 544 career goals, contributing to a total of 966 career points. The league now awards the Maurice “Rocket” Richard Trophy to the NHL player who scores the most goals in a season as a tribute to Richard’s skill.

Brett Hull has 741 career NHL goals, more than all but four other players in league history. The most remarkable thing about Hull was his ability to consistently dominate, even when everyone on the ice was supposed to be defending him. He played 19 NHL seasons in total, and in that time, he scored at least 24 goals for 17 consecutive seasons, scored more than 40 goals on at least eight occasions, and led the league in power-play goals three times. His greatest feat came during the 1990-91 season when he scored 86 goals in just 78 games, giving him the third-most goals in a single season, behind only two of Wayne Gretzky’s seasons.

Patrick Kane was a key cog in the Chicago Blackhawks dynasty that took place during the 2010s. His best professional season occurred in 2015-16, when he won the Art Ross Trophy for leading the league in points, the Hart Memorial Trophy for league MVP, and the Ted Lindsay Trophy, which is the MVP award as voted by the NHL players. He was the first American-born player to lead the NHL in scoring at the time. By the start of his third season, he had played a crucial role in helping Chicago back to relevance, but that was only the beginning. In his third season, Kane would help Chicago win the Stanley Cup by scoring the game-winning goal in Game 6 of the series against the Philadelphia Flyers.

Teemu Selanne took the league by storm and produced what may be the greatest rookie season in NHL history. Selanne joined the Winnipeg Jets at the age of 22 for the 1992-1993 NHL season and would go on to score 76 goals in just 84 games as a rookie. His incredible speed and ability to change directions allowed him to record the fifth most goals ever scored in a single season. His skill never faded, as even at the age of 43, he won MVP of the 2014 Sochi Winter Olympics, scoring two goals and leading his team to a bronze medal. Selanne was quickly inducted into the Hockey Hall of Fame in 2017.

Mark Recchi played a crucial role on the 1990-91 Pittsburgh Penguins team that would go on to win a Stanley Cup in just his first season with the team full-time. Recchi would manage to stay in the league for a long time, playing 22 seasons and 1,652 career games, an impressive feat on its own. He would be named an All-Star three times and even led the league in assists at age 31. Recchi would record his 1000th career point before he would play in his 1000th career game, a feat that shows his game was about production and not just showing up. Mark Recchi was inducted into the Hockey Hall of Fame in 2017.

What NHL right wing has the most Stanley Cups?

Yvan Cournoyer has the most Stanley Cups of any right wing in NHL history, with a grand total of ten. Of his ten total cups, four of them came consecutively from the 1975-76 season all the way through the 1978-79 season. Several other right wings experienced playoff success at levels somewhat close to Cournoyer, as Claude Provost managed to win nine Stanley Cups and Maurice Richard won eight. All three players would win their cups as members of different eras of the Montreal Canadiens’ dynasty.

What NHL right wing has the most points all time?

Jaromir Jagr has the most points of any right wing in NHL history. Without considering position, Jagr has the second-most points of any player in NHL history, with a total of 1,921 points. Only Wayne Gretzky recorded more points than Jagr did over the course of his career. Jaromir Jagr led the league in points for five seasons during his decorated career, which makes it a surprise that he only won a single MVP award during his career.

What does a right wing do in hockey?

A hockey winger is responsible for flanking each side of the center and patrolling the side of the ice that they are assigned to, so in the case of right wing, players would focus on attacking/defending on the right side of the ice. Wingers are a part of the forward position group, meaning they are primarily responsible for attacking the other team and creating/finishing scoring opportunities. They are also responsible for helping cover the opposing team’s defenseman in their defensive zone by preventing them from taking shots while also attempting to get the puck out of the defensive zone.