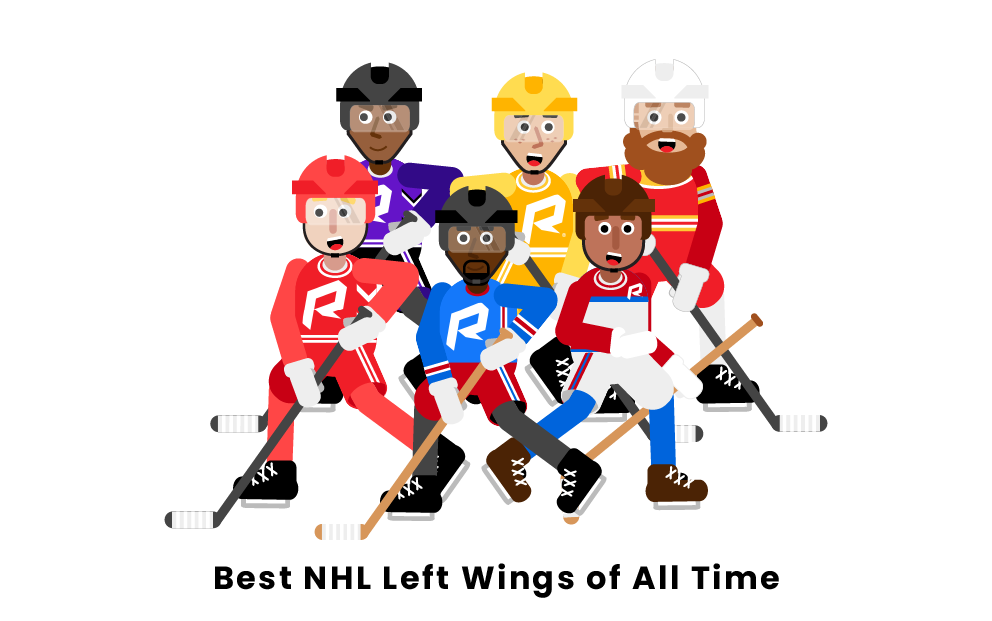 The NHL has hosted some of the best hockey players in the world over the years. Many of the league’s top players come from the left wing position. The top left wingers of all time were not only talented at scoring, but also at setting their teammates up for goals and leading their teams to championships.

What are the best NHL left wingers of all time?

Alex Ovechkin is widely considered the best left winger in NHL history. Ovechkin was drafted first overall by the Washington Capitals in the 2004 NHL Draft and began to make his mark immediately, earning the Calder Trophy for the top rookie player of the year. He proved to be a prolific scorer, recording an impressive 65 goals in the 2007-08 season and 56 goals in the 2008-09 season. Ovechkin won the scoring title and MVP award along with the Lester B. Pearson Award in both seasons for his remarkable play. On June 7, 2018, he led the Capitals to their first Stanley Cup title by defeating the Vegas Golden Knights 4-3 in Game 5 of the series. Ovechkin was named playoff MVP and awarded the Conn Smythe Trophy after scoring 15 goals in the postseason.

Luc Robitaille was drafted late in the 1984 NHL Draft (171st pick) by the Los Angeles Kings. He continued to play for his junior team for two years after the draft before officially joining the Kings in the 1986-87 season. Robitaille scored 45 goals along with 39 assists in his first season and was awarded the Calder Trophy as rookie of the year. He kept up his impressive scoring numbers, never dropping below 44 goals during his first eight seasons in the league.

Robitaille’s most memorable season took place from 1992-93, where he helped the Kings reach the Stanley Cup Finals by scoring 62 goals and 63 assists (125 total points). Two years later, Robitaille was traded to the Pittsburgh Penguins, where he spent one season before playing for several other teams. He won his first and only Stanley Cup with the Detroit Red Wings in 2001-2002. Robitaille returned to the Kings in 2006 to retire and finished his career with a record-breaking 668 goals and 1,394 points.

Bobby Hull was known for his aggressiveness on the ice and powerful slapshot. He moved up from St. Catharines in the Ontario Hockey League to play for the Chicago Blackhawks in 1957. Hull scored 13 goals during his first season and by 1960, he led the league with 81 points, 39 goals, and was awarded the Art Ross Trophy as a result. He was awarded the trophy two more times in 1962 and 1966 while also earning the Hart Trophy as the most valuable player in 1965 and 1966. Throughout his time in Chicago, Hull led the league in goals seven times and was named to the NHL First All-Star Team 10 times. He left the Blackhawks in 1972 to play for the Winnipeg Jets in the World Hockey Association, where he scored 303 goals during seven seasons with the team. After retiring following the 1979-80 season, Hull was inducted into the Hockey Hall of Fame in 1983.

Brendan Shanahan was drafted second overall by the New Jersey Devils in the 1987 NHL Draft. He played for the Devils for four seasons before moving to play for the St. Louis Blues, where he began to shine as one of the best in the league. During the 1992-93 season, Shanahan scored 51 goals and recorded 43 assists. The next season he scored 50 goals and tallied 100 total points for the year. After four years with the Blues, Shanahan played for the Hartford Whalers as team captain for one season before leaving to play for the Detroit Red Wings. His time with the Red Wings proved to be very successful, as he scored a total of 633 points, helped the team reach the postseason in all nine seasons, and won the Stanley Cup three times.

Keith Tkachuk was taken by the Winnipeg Jets with the 19th overall pick in the 1990 NHL Draft. After only two years with the team, he was named team captain. During the 1995-96 and 1996-97 seasons, Tkachuk scored 50+ goals and led the league with 52 goals in 1996-97. This ended up as his career-high goals in a season and was the first time an American-born player led the league in goals scored. After 10 seasons with the Jets (who transitioned to the Phoenix Coyotes during his time there), Tkachuk was traded to the St. Louis Blues. He played for the Blues for nine seasons, along with a short time with the Atlanta Thrashers, before retiring in 2010.

Paul Kariya was drafted fourth overall in the 1993 NHL Draft by the Mighty Ducks of Anaheim (he was the team’s first draft pick in history). He was selected to the NHL All-Rookie Team after scoring 18 goals and recording 39 points during his first season. Kariya scored a career-high 50 goals and 108 points in his next season, where he also made the NHL First All-Star Team. Throughout his nine seasons with the Ducks, he also won the Lady Byng Trophy twice and led the team to the 2003 Stanley Cup Finals, where they were defeated by the New Jersey Devils. In 2003, Kariya left the Mighty Ducks to play for the Colorado Avalanche. He played for the Avalanche for two seasons, followed by two seasons with the Nashville Predators and a few seasons with the St. Louis Blue before retiring in 2011.

Ted Lindsay, also commonly referred to as “Terrible Ted” for his rough playing style, joined the NHL to play for the Detroit Red Wings in 1944. During his 13 seasons with the Red Wings, Lindsay experienced immense success, winning the Stanley Cup with the team in four different seasons. He also was awarded the Art Ross Trophy in 1950 for leading the league in scoring. After attempting to establish the first Players’ Association in the late 1950s, Lindsay was traded to the Chicago Blackhawks, where he played for three seasons. He returned to the Red Wings for one final season in 1964 before officially retiring. Lindsay scored over 800 points throughout his career and was inducted into the Hockey Hall of Fame in 1966.

Ilya Kovalchuk was the first Russian-born player to be taken with the number one overall pick in an NHL Draft. He was selected by the Atlanta Thrashers in 2001. Kovalchuk quickly proved to be a top scorer, recording 51 points in his first season despite the fact that he missed the final 17 games due to a shoulder injury. In the following seasons, he continued to score efficiently and tied for the most goals in 2003-04 with 41 goals. Kovalchuk was traded to the New Jersey Devils in 2010 and played for the team for three seasons. One of his best seasons was 2011-12, where he recorded 11 shootout goals and helped the Devils reach the Stanley Cup Finals.

Frank Mahovlich was signed by the Toronto Maple Leafs but played for the St. Michael’s Majors, their affiliate team in the Ontario Hockey Association, for three seasons before officially joining the Maple Leafs in 1957. Mahovlich scored 20 goals and recorded 36 points in his first season, earning him the Calder Trophy for the league’s best rookie. The following season he led the Maple Leafs with 48 goals and continued to lead the team in scoring for the next three years. Mahovlich’s prolific scoring helped the team to win four Stanley Cup Championships during his time there. He was traded to the Detroit Red Wings in 1968, and later that year recorded a career-high 49 goals during the 1968-69 season. In 1971, Mahovlich was traded to the Montreal Canadiens, where he won two more Stanley Cups.

Who is the best left wing in NHL history?

Which left wing has won the most Stanley Cups?

Which left wing has the most points of all time?